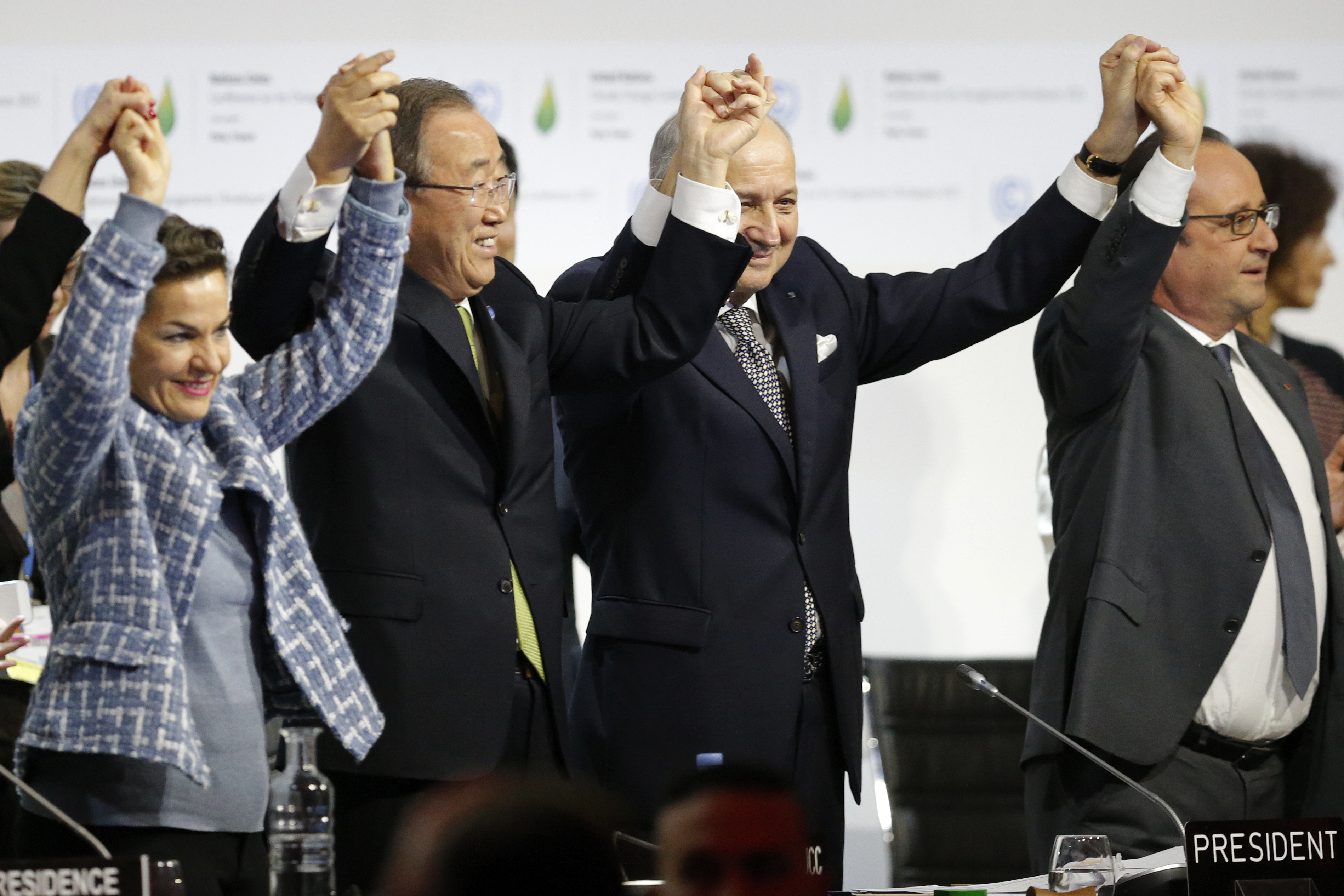 STOCKHOLM -- If governments are serious about the global warming targets they adopted in Paris, scientists say they have two options: eliminating fossil fuels immediately or finding ways to undo their damage to the climate system in the future.

The first is politically impossible -- the world is still hooked on using oil, coal and natural gas -- which leaves the option of a major cleanup of the atmosphere later this century.

"The problem's not solved because of this accord, but make no mistake, the Paris agreement establishes the enduring framework the world needs to solve the climate crisis," President Obama said in a speech from the White House's Cabinet Room. "It creates the mechanism, the architecture, for us to continually tackle this problem in an effective way."

Yet the landmark Paris Agreement, adopted by 195 countries on Dec. 12, makes no reference to that, which has left some observers wondering whether politicians understand the implications of the goals they signed up for.

"I would say it's the single biggest issue that has to be resolved," said Glen Peters of the Cicero climate research institute in Oslo, Norway.

Scientists refer to this envisioned cleanup job as negative emissions - removing more greenhouse gases from the atmosphere than humans put in it.

Right now we're putting in a lot -- about 50 billion tons a year, mostly carbon dioxide from the burning of fossil fuels for energy.

There are methods to achieve negative emissions today but they would need to be scaled up to a level that experts say could put climate efforts in conflict with other priorities, such as eradicating hunger. Still, if the Paris climate goals are to be achieved, there's no way to avoid the issue, said Jan Minx of the Mercator Research Institute on Global Commons and Climate change in Berlin.

"My view is, let's have this discussion," he said. "Let's involve ourselves in developing these technologies. We need to keep learning."

The Paris Agreement was historic. For the first time all countries agreed to jointly fight climate change, primarily by reducing the emissions of carbon dioxide and other greenhouse gases.

Governments vowed to keep global warming "well below" 2 degrees Celsius (3.6 degrees Fahrenheit) compared with preindustrial times. But even 2 degrees of warming could threaten the existence of low-lying island nations faced with rising seas. So governments agreed to try to limit warming to 1.5 degrees C (2.7 degrees F), which is just half-a-degree above the global average temperature this year.

That goal is so ambitious - some would say far-fetched - that there's been very little research devoted to it. In Paris, politicians asked scientists to start studying how it can be done.

Minx and others said it's clear the goal cannot be reached without negative emissions in the future, because the atmosphere is filling up with greenhouse gases so fast that it may already be too late to keep the temperature rise below 1.5 degrees C.

"We are late with climate policy. We need to buy back some time," Minx said.

That means allowing warming to exceed 1.5 degrees temporarily and then bringing it down by removing carbon dioxide, which traps heat in the atmosphere.

The task would be enormous. One recent study said hundreds of billions of tons of carbon dioxide would have to be removed in the second half of this century.

That has led some scientists to consider controversial geoengineering solutions like fertilizing the oceans with iron to make them absorb more carbon.

But the more viable methods being discussed today include planting more forests, which absorb carbon dioxide naturally as they grow, and combining bioenergy with carbon capture technologies.

Bioenergy comes from burning biological sources such as trees or crops. That results in zero net emissions, if the carbon dioxide released when one tree is burned is offset by the carbon dioxide absorbed when a new tree grows up.

However, if you also capture the emissions from the bioenergy plant and bury them underground, you are actually removing carbon dioxide from the atmosphere.

Although the technology exists, it has received very little attention from policy makers, advocates say. There's only one large-scale biomass facility worldwide using the method: a bioethanol plant in Decatur, Illinois.

"It's been treated as an esoteric, maybe unnecessary field of research," said Henrik Karlsson, who heads Biorecro, a Swedish company that specializes in the process.

The obstacles are many. Carbon capture technology is very expensive. And then there's the issue of finding places to store the carbon dioxide once you've captured it.

Typically it is injected into rock formations deep underground, but "people don't like carbon stored under them," said Peters. "It's not just a few tons. It's billions of tons a year."

Another problem is that to reach a point where the method actually generates enough negative emissions to enable the 1.5-degree target, bioenergy would need to be much a bigger part of the global energy mix. It's just 10 percent today.

Critics say that could mean converting millions of acres of farmland used for food production to grow biocrops, which could clash with Article 2 of the Paris Agreement, which says the battle against climate change must be carried out "in a manner that does not threaten food production."

Right now the idea of achieving negative emissions may seem like a pipe dream. Governments are still trying to stop record emissions from growing even higher, while allowing developing countries including India and China to expand their economies.

Oliver Geden of the German Institute for International and Security Affairs said the temperature goals governments adopted in Paris don't match the actions nations are taking to limit emissions.

"It's so easy to have this kind of target," he said. "I don't understand that given the history of the (U.N. climate talks), everyone is taking this seriously."

Peters said achieving the 1.5-degree C target is "pretty unlikely" and that even the higher temperature target would be difficult and most likely require negative emissions.

"It's really hard to see that 2 degrees will remain on the table unless you have some fundamental technological breakthrough," he said. "There are just too many competing interests."