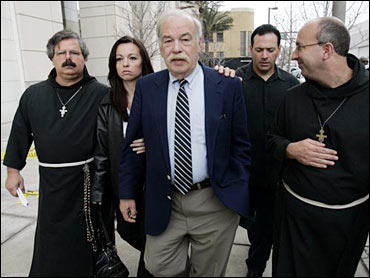 Warning that Terri Schiavo is "fading quickly," her parents begged a federal appeals court Tuesday to order the severely brain-damaged woman's feeding tube reinserted while they pursue claims that her rights are being violated.

David Gibbs III, attorney for parents Bob and Mary Schindler, told the 11th U.S. Circuit Court of Appeals in Atlanta that the 41-year-old woman might die before they get a chance to fully argue their case. The appeal came after a federal judge in Tampa rejected the parents' emergency request.

"Where, as here, death is imminent, it is hard to imagine more critical and exigent circumstances," Gibbs said in the appeal filed electronically with the court. "Terri is fading quickly and her parents reasonably fear that her death is imminent."

The ruling by U.S. District Judge James Whittemore came after feverish action by President Bush and Congress on legislation allowing the contentious case to be reviewed by federal courts. The judge said the 41-year-old woman's parents had not established a "substantial likelihood of success" at trial on the merits of their arguments.

The notice of appeal was filed electronically hours later with the 11th U.S. Circuit Court of Appeals in Atlanta by David Gibbs III, an attorney for Terri Schiavo's parents. The notice tells the court that the full appeal will follow. That court was already considering an appeal on whether Terri Schiavo's right to due process had been violated.

The appeals court will likely rule in a matter of hours, and the losing side will appeal to the United States Supreme Court, which also has a lot of practice in turning around emergency appeals, says CBS News.com Legal Analyst Andrew Cohen.

Even before the parents' full appeal was filed, Michael Schiavo said in a filing with the appeals court that his wife's rights would be violated if the judges ordered nutrition restored while considering whether the feeding tube, removed last Friday, should be permanently reconnected.

"That would be a horrific intrusion upon Mrs. Schiavo's personal liberty, and the status quo should therefore be maintained until this court issues its final ruling," said the filing by Michael Schiavo's attorney, George Felos. The status quo — with the feeding tube removed — could continue for a couple of days without harming Terri Schiavo, the filing argued.

Felos also told the judges he would appeal to the U.S. Supreme Court if the tube is ordered reconnected on a temporary basis.

In his early morning ruling, Whittemore wrote that Schiavo's "life and liberty interests" had been protected by Florida courts. Despite "these difficult and time strained circumstances," he wrote, "this court is constrained to apply the law to the issues before it."

No further hearings were scheduled before Whittemore.

The Bush administration "would have preferred a different ruling," White House press secretary Scott McClellan told reporters in Albuquerque, N.M., where the president was visiting a senior center.

"We hope that they would be able to have relief through the appeals process," McClellan said.

While Rex Sparklin, another attorney for the parents, said the appeal was needed to "save Terri's life," Howard Simon, executive director of the American Civil Liberties Union of Florida, praised the ruling.

"What this judge did is protect the freedom of people to make their own end-of-life decisions without the intrusion of politicians," Simon said.

Bobby Schindler, Terri Schiavo's brother, said his family was crushed. "To have to see my parents go through this is absolutely barbaric," he said in a broadcast interview on Tuesday. "I'd love for these judges to sit in a room and see this happening as well."

Scott Schiavo, Michael Schiavo's brother, called the judge's decision "a good thing," and said he did not believe Congress should have intervened.

"There's not a law that's made for this," Scott Schiavo said in a telephone interview. "This is something that goes on 100 times a day in our country, that people, their wish to die with dignity is not a federal issue."

The tube was disconnected Friday on the orders of a state judge, prompting an extraordinary weekend effort by congressional Republicans to push through unprecedented emergency legislation Monday aimed at keeping her alive.

Two new polls showed that most Americans backed the decision to permit the removal of Schiavo's feeding tube.

Louise Cleary, a spokeswoman for Woodside Hospice, said she could not discuss Terri Schiavo's condition Tuesday. "To honor the privacy of all of our patients, we couldn't comment," Cleary said.

Gov. Jeb Bush was described by a spokeswoman as "extremely disappointed and saddened" by the federal judge's decision not to order the tube reconnected. "Gov. Bush will continue to do what he legally can within his powers to protect Terri Schiavo, a vulnerable person," said spokeswoman Alia Faraj.

Terri Schiavo did not have a living will. Her husband has fought in courts for years to have the tube removed because, he said, she would not want to be kept alive artificially and she has no hope for recovery. Her parents contend she responds to them and that her condition could improve.

Court-appointed doctors say she is in a persistent vegetative state with no hope of recovery. Doctors have said she could survive one to two weeks without the feeding tube.

Gibbs argued at a Monday hearing in front of Whittemore that letting Terri Schiavo starve would be "a mortal sin" under her Roman Catholic beliefs and urged quick action: "Terri may die as I speak."

But Felos argued that keeping the woman alive also violated her rights and noted that the case has been aired thoroughly in state courts.

"Yes, life is sacred," Felos said. "So is liberty, particularly in this country."

Michael Schiavo said he was outraged that lawmakers and the president intervened in a private matter. "When Terri's wishes are carried out, it will be her wish. She will be at peace. She will be with the Lord," he said in a broadcast interview late Monday.

Terri Schiavo suffered brain damage in 1990 when her heart stopped briefly. Her collapse was later linked to a potassium imbalance believed to have been brought on by an eating disorder. A successful malpractice lawsuit argued that doctors had failed to diagnose the eating disorder. She can breathe on her own, but has relied on the feeding tube to keep her alive.