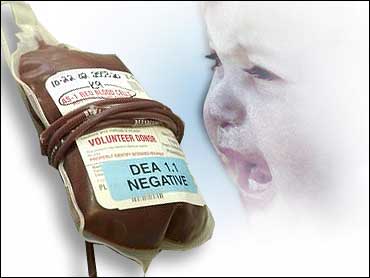 Angie and Chris Knutsen were facing one of parenting's toughest challenges.

Their youngest daughter, Haley, was battling leukemia. Two and a half years of chemotherapy and an all-too-short remission led them to make what some might call a controversial decision.

They chose to bring Jayce into the world, hoping that the stem cells from his umbilical cord could some day save his sister's life.

That opportunity came last month when Haley received a transplant, using her brother's stem cells, that more than doubled her chance of survival.

To those who think it is morally wrong to have one child in the hopes of saving another, Angie Knutsen tells The Early Show co-anchor Julie Chen, "They just need to step in our own shoes. You do what you can to save your kids."

As the director of pediatric bone-marrow transplantation at the University Medical Center in Tucson, Ariz., Dr. Michael Graham, who did Haley's transplant, says it is a personal decision parents make.

"It always has to be an individual decision, whether or not to add another child to the family," he says. "Not just as a donor, but this is something that families have to decide for themselves."

The Knutsens found out two days before Haley turned 2 that she had leukemia. Six months after undergoing chemotherapy treatment, she went into relapse, by then Haley was 5, and the next step was getting a bone marrow transplant, which came from a donor from Germany, only to relapse once again.

The couple says they decided to have another baby after Haley went through the transplant and they found their older daughter, Kaylene, was not a match.

Had their newborn baby not been a match, Angie Knutsen says they probably would have thought of having more children.

She says, "Chris really wanted to have more kids. The pregnancy was a little bit hard. It's hard to say. I probably would. I don't know. I'm not sure."

Comparing the previous transplant with the one using her son's stem cells, Angie Knutsen says, "Last time, she was very, very, very down. A lot of complaints. This time, it was milder. She's got a little bit of stuff, but it was still milder."

Dr. Graham agrees there have been fewer side effects.

"What is notable this time is that Haley has suffered far fewer side effects, that it's a much milder transplant to go through. And that's part of the excitement of being able to do it from a related donor," Dr. Graham says.

In terms of the success of the transplant, he says, "It will still take us a few months and even a number of years to be able to be sure that it's been successful."

Thus far, Haley's father, Chris, says, "She's doing great. Hopefully, she'll be getting out of the hospital today (Friday, July 23). We'll move her into an apartment down here, where she'll be able to come back to the clinic on a daily basis."

About her little brother, Haley says, "I feel happy. And I love him so much. And I'm glad that he did this for me."

Chris Knutsen notes, "He's been pleasing in many ways and loves his big sister. Right, Jayce?

Dr. Graham says, "He's a happy boy and a very welcome addition to the family. And the fact that he turned out to be a donor for Haley is just wonderful."