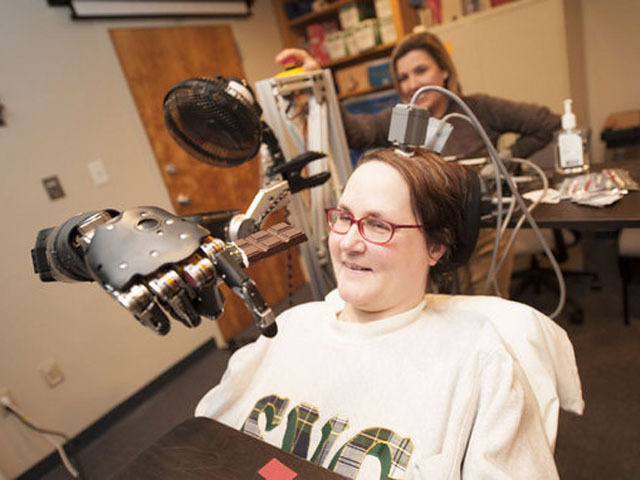 A woman paralyzed from the neck down is now able to use a robot arm to give high fives and help her eat chocolate, representing what may be the most advanced mind-controlled prosthetic hand developed for humans yet, researchers said.

Although scientists had worked on robotic limbs that monkeys could move with their minds, these new results mark the first time a person could steer thought-controlled prosthetics better than monkeys have, investigators added.

"This is a spectacular leap toward greater function and independence for people who are unable to move their own arms," said researcher Andrew Schwartz at the University of Pittsburgh. "This technology, which interprets brain signals to guide a robot arm, has enormous potential that we are continuing to explore."

"As we move forward, we might find this is applicable to other types of traumatic brain injury," researcher Elizabeth Tyler-Kabara at the University of Pittsburgh told LiveScience. "The populations that we can apply this to might be as wide as our imagination is."

The woman, Jan Scheuermann, a mother of two children, once ran a successful business planning parties with murder-mystery themes. In 1996, she noticed her legs seemed to drag behind her, and within two years, her legs and arms weakened to the point that she required a wheelchair and an attendant to help her with dressing, eating, bathing and other daily activities. [See Photos of Jan Using the Prosthetic]

Scheuermann suffers from spinocerebellar degeneration, a genetic disease where connections between the brain and muscles slowly deteriorate. She is now tetraplegic (also called quadriplegic), meaning that she is paralyzed from the neck down, and cannot voluntarily move her arms or legs.

"I can't even shrug my shoulders," Scheuermann said. "But I have come to the conclusion that worrying about something is experiencing it twice. I try to dwell on the good things that I have."

A friend of Scheuermann's pointed out a 2011 video about research at the University of Pittsburgh on a man with tetraplegia, Tim Hemmes, that gave him the ability to move objects on a computer screen and reach out with a robot arm to touch his girlfriend.

"Wow, it's so neat that he can do that," Scheuermann recalled thinking as she watched Hemmes. "I wish I could do something like that." She had her attendant call the researchers and say, "I'm a quadriplegic. Hook me up, sign me up! I want to do that!"

The scientists developed microelectrode arrays that connect brain cells to electronic circuitry -- square grids just 16 square millimeters large with 96 points that penetrate the brain's surface by about one-16th of an inch. They scanned Scheuermann's brain to determine exactly where to put these electronics, and in February, they implanted the devices into her left motor cortex, the part of the brain that controls movement of the right arm and hand. [9 Cyborg Enhancements Available Right Now]

These implants were linked to a robotic limb Scheuermann has named Hector, which is capable of joint and wrist movements comparable to that of a human hand.

"The prosthetic arm we used was very sophisticated, with many of the same arm and hand segments as that of its human counterpart," Schwartz told LiveScience.

Two weeks after implantation, on just the second day of training with the prosthetic, Scheuermann was able to move it freely using just her mind. Within a week of training, she could reach in and out, left and right, and up and down using the arm.

"What we did in the first week they thought we'd be stuck on for a month," Scheuermann said.

Scheuermann took part in a 13-week-long comprehensive training and testing program to control the prosthesis along seven degrees of freedom -- types of motions the prosthetic's joints could perform, such as flexing the wrist back and forth, moving it from side to side, and rotating it clockwise and counterclockwise. Coming to the lab three times per week, she rapidly learned to reach and grasp blocks, cones and balls with the prosthesis, developing fluid and rapid control over skillful movements almost similar to that of a person with regular abilities.

"I would definitely do this again," Scheuermann told LiveScience. "I think I am very blessed for this coming into my life."

Scheuermann had told the research team, "I'm going to feed myself chocolate before this is over." Using Hector, Scheuermann savored some chocolate as the scientists applauded her feat. "One small nibble for a woman, one giant bite for BCI (brain-control interfaces)," Scheuermann said.

In the end, Scheuermann could use the prosthetic to reach for objects, adjust the opening of the prosthetic hand to grasp items of various shapes and sizes, and move them to desired locations. She was able to complete requested tasks with a success rate of up to 91.6 percent, and more than 30 seconds more quickly than she did at the start of the program.

The unprecedented speed at which Scheuermann adapted to the prosthesis is partly due to an innovative new way of connecting the participant's brain to the prosthesis. Brain-machine interfaces work by converting brain signals to computer signals. The researchers previously monitored the signals that brains give out when people move their arms, and designed the behavior of the prosthetic to match Scheuermann's brain activity when she thought about moving her arm as intuitively as possible. [10 Strange Facts About the Brain]

"The result is a prosthetic hand, which can be moved far more accurately and naturalistically than previous efforts," Schwartz said.

Future research might seek to include sensors into the prosthetic so that patients might, for instance, be able to tell the difference between hot and cold, or smooth and coarse surfaces. The prosthetics might also incorporate wireless technology, removing the need for connecting wires between the patients and the prosthetic.

"We're hoping this can become a fully implanted, wireless system that people can actually use in their homes without our supervision," said researcher Jennifer Collinger at the University of Pittsburgh and the VA Pittsburgh Healthcare System. "It might even be possible to combine brain control with a device that directly stimulates muscles to restore movement of the individual's own limb."

Currently, the implants are scheduled to be removed after two more months of testing, because the FDA approved such tests with the understanding they were of limited duration.

"We can and have applied for an extension, which was approved and are currently assessing whether to continue beyond the date that was originally planned," Schwartz said.

"This is the ride of my life," Scheuermann said. "This is the roller coaster. This is skydiving. It's just fabulous, and I'm enjoying every second of it."

"What we need are volunteers," researcher Michael Boninger at the University of Pittsburgh told LiveScience. "What we need is funding."

The scientists detailed their findings online Dec. 16 the journal The Lancet.