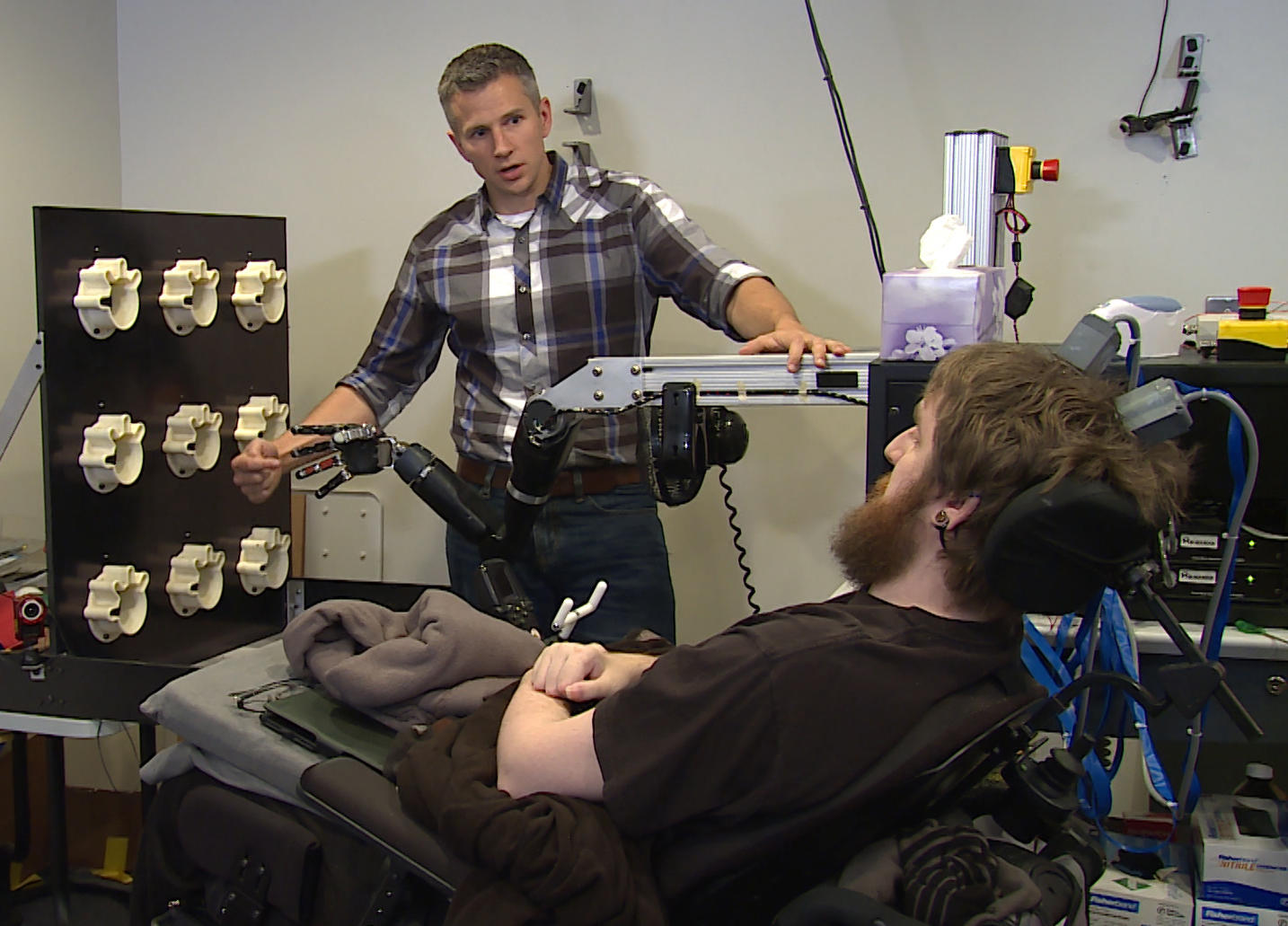 WASHINGTON A paralyzed man is regaining a sense of touch while using a mind-controlled robotic hand, feeling subtle pressure in his own fingers when the artificial ones are touched. The experiment reported Thursday is an early step in the quest to create prosthetics that can feel.

How it works: Tiny chips implanted in Nathan Copeland’s brain are bypassing his broken spinal cord, relaying electrical signals that govern movement and sensation to and from that robotic arm.

When University of Pittsburgh researchers blindfolded Copeland, he could correctly identify which robotic finger they touched 84 percent of the time.

“The majority of them, it felt like a pressure or a tingling” in his own corresponding finger, said Copeland, 30, of Dunbar, Pennsylvania. When a researcher touched two fingers at the same time, “I just laughed and I said, ‘Are you trying to be tricky or something?”

Harnessing brain waves to power prosthetics is a hot field, with a goal of giving the disabled more independence and improving artificial limbs for amputees as well. Headlines in recent years have reported experiments that let paralyzed people move a robotic arm to touch a loved one or take a drink simply by imagining the motion. Their thoughts activate brain implants that relay electrical signals needed to command movement. The signals are transmitted through a computer to the robotic limb.

What’s new is recreating sensation using this brain-controlled technology. After all, proper motion depends on more than muscle movement. Reach for something and that sense of touch helps you naturally grasp with just enough force to hang on while not either dropping something or crushing it.

“It’s not only that emotional connection we get,” said Robert Gaunt, a Pittsburgh assistant professor of rehabilitation who led the new study. “People have an incredibly difficult time interacting with objects, picking objects up, manipulating them, doing fairly basic things with the hand if they don’t have a very basic sense of touch.”

Step one is placing sensors in prosthetics. The next hurdle is how to allow feedback to and from those sensors. For amputees, some scientists are attempting to wire nerves left in the remaining part of the person’s natural limb directly to the robotic arm.

That’s not possible if a spinal cord injury has interrupted the messages that normally flash between the hand and the brain. But previous monkey research had suggested brain implants could bridge that gap. So surgeons at the University of Pittsburgh Medical Center implanted electrodes in part of Copeland’s brain that controls what his hands feel.

Electrically stimulating those cells worked even though the car wreck that left Copeland mostly paralyzed happened over a decade ago, Gaunt noted.

“This shows you can get natural sensation” through the brain implant, added Pittsburgh neurobiologist Andrew Schwartz.

Thursday’s report in Science Translational Medicine details the first six months of experiments after Copeland received the brain implants in March 2015. The ongoing research is becoming more sophisticated, as he picks up objects while the electrodes stimulate different amounts of force, Copeland said in a phone interview.

While the work is in just one patient, it’s a step toward creating touch capability, said Richard Andersen, a neuroscientist at the California Institute of Technology whose team also studies mind-controlled prosthetics and is about to begin a similar experiment.

“It still needs to be determined if this tactile feedback will improve performance” in using the robotic arm, Andersen cautioned.

Copeland doesn’t get to take the robotic arm home but is proud of helping to advance the science.

“Technically when it’s over, I will have netted nothing except having done some cool stuff with some cool people,” Copeland said. “It’s cheesy but, Luke Skywalker loses his hand and then basically the next day he’s got a robot one and it’s working fine. We have to get to that point, and to do that, someone has to start it.”