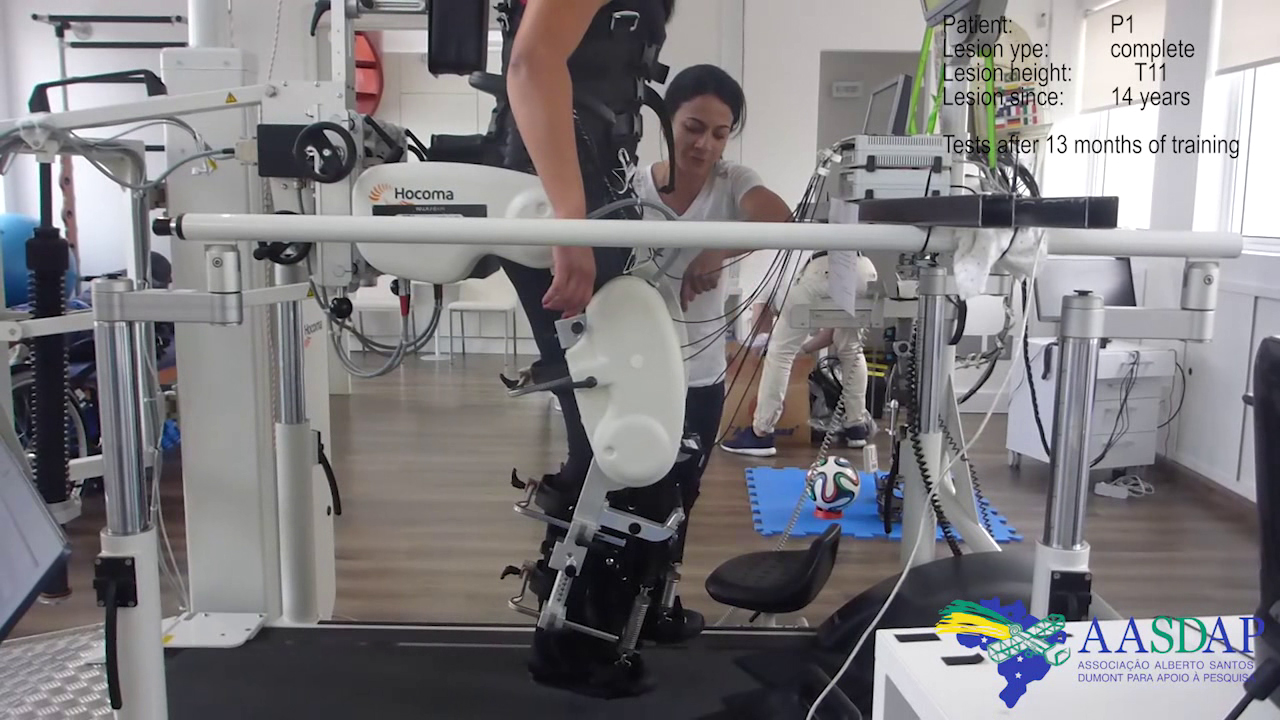 A regimen of brain training has restored partial sensation and muscle control in the legs of eight people paralyzed by spinal cord injuries, researchers report.

The step-by-step training appears to jump-start the connection between brain and body through the use of virtual reality walking simulations, specially designed exoskeletons and tactile feedback, said senior researcher Dr. Miguel Nicolelis. He is director of the Duke University Center for Neuroengineering.

Weekly training with these machines re-awakened undamaged but unused spinal cord nerves that had survived the car crashes, falls and other accidents that caused paralysis, he said.

The patients also regained some level of bladder control and bowel function that had been lost due to their spinal cord injury. "They were able for the first time in many years to control their bathroom routine," Nicolelis said.

The eight patients all had sustained spinal cord injuries that left their lower bodies completely paralyzed for between three years and 13 years, the researchers said.

At the beginning of the study, investigators asked the patients to think about walking while undergoing a brain scan. The scans found no activity at all in the regions of the brain associated with movement.

"That suggests to us the representation of the lower limbs and the idea of locomotion had almost been erased from the brain," Nicolelis said.

These patients' training regimen started with at least two hours a week spent in a virtual reality environment where their brains controlled the movement of a three-dimensional avatar walking across a soccer field, Nicolelis said.

An EEG (electroencephalogram) cap strapped to their heads monitored the brain areas that control movement, and translated signals into steps taken by the avatar. At the same time, a specially designed shirt produced tiny vibrations on their arms every time the avatar moved, providing tactile feedback of each step taken.

After months of such training, researchers began to see an increase in brain activity related to walking. "We are basically driving the brain to reinsert the idea of walking and reinsert the interpretation of the legs," Nicolelis said.

At that point, the patients moved on to more challenging exercises using equipment that allowed them to move their own bodies, rather than a virtual avatar.

One piece of equipment used a harness to suspend a patient over a treadmill, supporting their weight while a robotic device moved their legs using brain signals. Patients also were placed in a self-supported exoskeleton that took steps in concert with their brain signals.

In all cases, the patients continued to wear the feedback shirt, allowing the brain to receive tactile signals through the arms every time a step was taken, the study authors said.

After 12 months, all of the patients had experienced some recovery of muscle function and tactile sensation, the findings showed. Some were able to voluntarily move multiple joints in their legs, something they hadn't been able to do for years.

A 32-year-old woman paralyzed for 13 years experienced the most dramatic improvement, the researchers said.

When training began, she was unable to stand using braces, but she gradually gained the ability to move using a walker, braces and a therapist's help. After a little over a year, she could move her legs voluntarily while her body weight was supported in a harness.

On June 12, 2014, a young man paralyzed from his chest down used one of the project's exoskeletons to deliver the opening kickoff of the soccer ball at FIFA World Cup in Brazil.

The study, the first clinical report from Duke's Walk Again Project, was published Aug. 11 in the journal Scientific Reports.

Ron Frostig, a professor of neurobiology and behavior at the University of California, Irvine, called the work of Nicolelis and colleagues "a breakthrough."

"We all thought we cannot help these people," Frostig said. "They showed how gradually you can activate motor system function below the level of the damage. That's big news."

Nicolelis believes the training is allowing the brain to rediscover the legs through the use of whatever few spinal cord nerves remain viable in the patients. "Whatever is left, the brain is going to take advantage of," he said.

The combination of different mental and physical exercises appears to be the key element, Frostig said.

"It's a combination of many hours training on different techniques. It's not one magic technique, but they've shown this can be done," he said. "Now maybe we can find ways to improve it further, but this is the proof of concept, which is so important."

Nicolelis noted that the patients in the study continue to train, and continue to get better. "We have found that their neurological improvement has continued to go up, even though they are not training as intensively as they were," he said. "We haven't seen a plateau for recovery yet."

The training doesn't take much time, about two hours or so a week, but it is intense. Based on one person who had to drop out of the study, it also appears that the training must be ongoing, Nicolelis added.

"We followed him, and after six months or so we began to see declines," he said. "We know if you stop completely, after a few months you will see a reduction in your improvement."

The training cannot help people with a completely severed spinal cord, but Nicolelis said it might be able to help people who have lost mobility due to stroke or some other neurological disease.

"We should be able to adapt this to other disorders," he said.