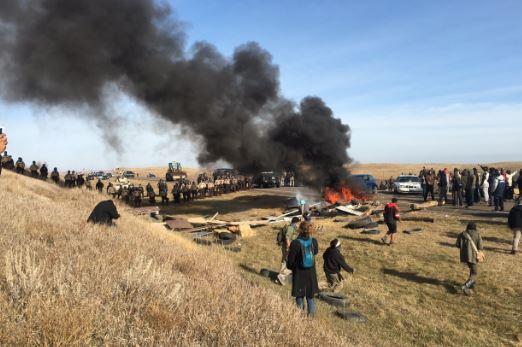 The sudden developments in the two protests drew an unsettling contrast for some between the treatment of mostly Native American citizens at an encampment near the Standing Rock Sioux Reservation and the heavily armed occupiers who held the federal government at bay for weeks in the remote Malheur National Wildlife Refuge.

“How is it that people who were seen on national media with guns having a standoff with police officials were acquitted ... and we’re being treated like we’re terrorists?” said Cody Hall, a member of the Cheyenne River Sioux Tribe in South Dakota and a spokesman for the pipeline protesters.

Yet experts on public land policy who have watched both situations unfold cautioned it is too soon to draw conclusions about either protest’s outcome - and pointed to broad yet important themes that underlie movements otherwise separated by hundreds of miles and an ideological chasm.

Both the Standing Rock Sioux and the Oregon occupiers consider themselves marginalized groups fighting to preserve a way of life.

“At that level, even though all the details are different, they’re very similar,” Cawley said. “If you step back far enough ... then you can start seeing some parallels here.”

Ammon and Ryan Bundy, neither native to Oregon, seized the refuge in January to a protest the imprisonment of two ranchers convicted of setting fires on public land. More than two dozen others eventually joined the 41-day occupation, which grew into demands for the U.S. government to turn over public lands to local control.

On Thursday, jurors acquitted the brothers and five others on felony charges that included conspiracy and possession of a gun in a federal facility.

In North Dakota, hundreds of Standing Rock Sioux tribal members and their supporters have held a monthslong campaign to protest the Dakota Access oil pipeline, which would skirt the reservation’s northern border. The tribe says the 1,200-mile pipeline will damage its water supply and endanger sacred sites.

Texas-based Energy Transfer Partners is building the conduit from western North Dakota to Illinois, and state officials say no sensitive cultural sites have been found on the route.

The North Dakota protesters face misdemeanor charges, including trespassing and engaging in a riot.

The scale of the arrests shocked many onlookers, but public land policy experts cautioned it’s too early to make meaningful comparisons between Standing Rock and Oregon.

“These folks on the pipeline have just been arrested, but we don’t even know if any of that is going to hit a trial,” said John Freemuth, of Boise State University. “I certainly think the tribes will have a point if they find themselves arrested and in jail and these Oregon guys get off.”

The response to the Standing Rock protest has been racially charged since the beginning, he said.

“History has placed the Indian peoples as expendable. And I think that attitude still exists in some circumstances,” he said.

That perception underscores what many at Standing Rock see as the ultimate irony: that although the Oregon occupiers said they were protesting the government’s takeover of public lands, they themselves are descendants of the original American occupiers.

That alone has strengthened the North Dakota protesters’ resolve - particularly when the Burns Paiute Tribe in Oregon spoke out about potential damage the refuge protesters were doing to their sacred sites and to tribal artifacts in storage there, Freemuth said.

“They’re seeing a protest against the government and these lines, ‘We want to take the land back.’ That is wrong historically for the Bundys to say that, but any Native American with any appreciation of their history, when they hear, ‘Take the lands back,’ that really resonates,” he said.

In a separate protest Friday, members of the Black Lives Matter movement in Portland burned an American flag belonging to a supporter of the Oregon occupiers at a gathering near the federal courthouse. The Black Lives Matter demonstrators said they were angered by the disparity between their treatment by Portland police during recent protests and the Bundys’ acquittal.