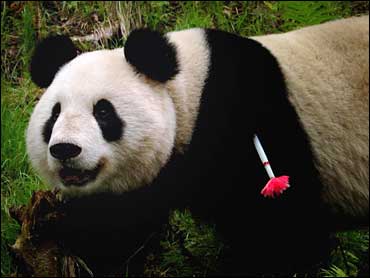 A 5-year-old panda that last year became the first to be released into the wild after being bred in captivity has died, state media and Chinese nature reserve officials said Thursday.

The body of Xiang Xiang was found Feb. 19 on snow-covered ground in the forests of Sichuan province in China's southwest, the Xinhua News Agency said. He survived less than a year in the wild after nearly three years of training in survival techniques and defense tactics.

"Xiang Xiang died of serious internal injuries in the left side of his chest and stomach by falling from a high place," Heng Yi, an official from the Wolong Giant Panda Research Center in Sichuan, said in a telephone interview.

"The scratches and other minor injuries caused by other wild pandas were found on his body," he said. "So Xiang Xiang may have fallen from trees when being chased by those pandas."

Heng said the long delay in announcing Xiang Xiang's death was attributed to the need for a full investigation.

"We are all sad about Xiang Xiang, but it doesn't mean the project has failed," Zhang Hemin, the center's head, was quoted as saying by Xinhua. "The lessons we have learnt from what happened to Xiang Xiang will help us adapt and improve the project."

The 176-pound male panda was released from Wolong in April 2006 and had been trained almost three years to survive in the wild. Xiang Xiang, whose name means auspicious, learned how to build a den, forage for food and mark his territory, experts at Wolong have said. He also developed defensive skills like howling and biting.

"We chose Xiang Xiang because we thought that a strong male panda would have a better chance of surviving in the harsh natural environment," Li was quoted as saying. "But the other male pandas clearly saw Xiang Xiang as a threat. Next time we will choose a female panda."

State media last year said that Xiang Xiang hesitated for a second when the door of his cage was opened, then scampered off into a nearby bamboo forest where he was tracked by a global positioning device attached to his collar.

He has been buried at the foot of a mountain, about eight miles from the Wolong center, Li said.

There are only about 1,600 wild pandas in the mountain forests of central China — the only place in the world they are found — and more than 180 live in captivity.

Pandas are threatened by loss of habitat, poaching and a low reproduction rate. Females in the wild typically have a cub once every two to three years.