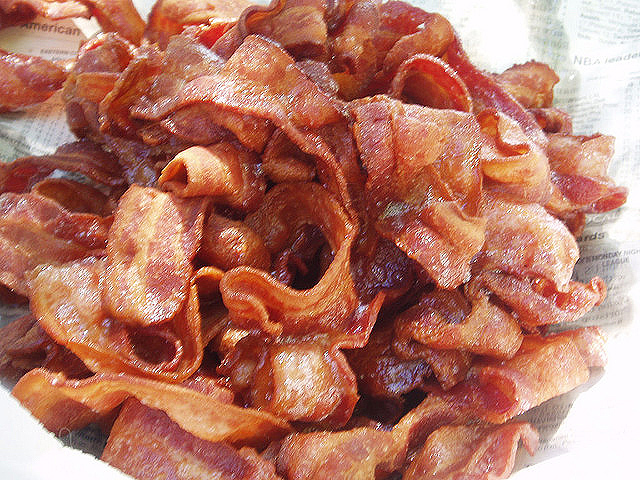 For every piece of sausage or two strips of bacon a person eats every day, there's a 19 percent rise in risk for pancreatic cancer, the study found.

"There is strong evidence that being overweight or obese increases the risk of pancreatic cancer and this study may be an early indication of another factor behind the disease," Dr Rachel Thompson, deputy head of science at The World Cancer Research Fund, told BBC News.

For the study, researchers reviewed 11 studies and case reports on more than 6,000 pancreatic cancer patients, looking for a link between eating red and processed meats and cancer. The researchers found the raised risk was tied to every 50 grams of processed meat a person eats per day. If you're the type who eats 150 grams of processed meat a day - from only three sausages or six strips of bacon - your pancreatic cancer risk shoots up 57 percent, the study suggests.

What about red meat, which has been linked to stomach and esophageal cancers?

Evidence was inconclusive, the researchers said. Men who ate 120 grams of red meat per day saw their pancreatic cancer risk increase 29 percent, compared with men who don't eat red meat. This effect was not seen in women, however, possibly because men in the study ate more red meat than women, the researchers said.

The study is published in the Jan. 12 issue of the British Journal of Cancer.

"Pancreatic cancer has poor survival rates," study author associate professor Susanna Larsson, a researcher at Karolinska Institutet in Sweden, said in a written statement. "If diet does affect pancreatic cancer, then this could influence public health campaigns to help reduce the number of cases of this disease developing in the first place."

Processed meats, including sausage, pepperoni, bacon, ham, smoked turkey, and hot dogs, often contain nitrates and nitrites, which have been tied to cancer. Last August, a study of 300,000 men and women, published in the journal Cancer, found people who ate large amounts of processed meats had a 30 percent increased risk for bladder cancer, HealthPop reported.

James H. Hodges, president of the American Meat Institute, was not swayed by the new study, because it only took into account epidemiological data, and didn't look at other lifestyle factors that could contribute to cancer. He said in a written statement that eating red and processed meats is part of a healthy, balanced diet.

"More often than not, epidemiological studies, over time, provide more contradictions than conclusions," he said.