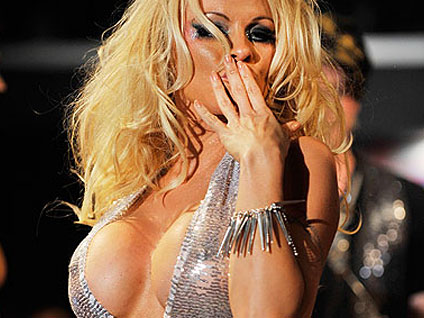 The former "Baywatch" TV lifeguard, will be on hand to poke fun at her "Baywatch" co-star David Hasselhoff in a televised Comedy Central event taping on Aug. 1.

According to USA Today, other celebs participating in the roast of the 58-year-old actor include Whitney Cummings, Greg Giraldo, George Hamilton, Hulk Hogan, Lisa Lampanelli, Jeffrey Ross and Jerry Springer. Seth MacFarlane signed on as emcee for the event.

Hasselhoff has already taped two new promo ads for the roast and sounds primed for ribbing. Both ads include the actor eating a hamburger, alluding to the 2007 video made by his daughters showing him drunk and lying on the floor trying to eat a burger.

Anderson is a vocal PETA supporter, so maybe there will be some dukes put up by the star over Hasselhoff's meat consumption? The actress had her own roast on the network in 2005.

The show will broadcast on Aug. 15 on Comedy Central.