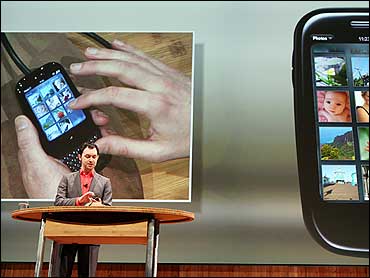 One of the biggest surprises of CES was Palm's Pre smart phone that some are calling an iPhone killer. While I don't expect this or anything else to kill the iPhone, it does appear that Palm could again become a major player in the smart phone market.

As a product reviewer I will reserve final judgment until I can carry one around and put it through its paces, but based on the few minutes I got to use the phone at CES, I am very impressed.

Until now the iPhone was the only mobile device with a decent browser but it looks like Palm might break that stronghold. Like the iPhone that Pre has a touch screen with a "multi-touch" feature that lets you pinch two fingers to zoom in or out of a web page. There is also a gesture that lets you see a single column of text which will make it easier to read news sites. You can also use the pinching gesture on photos and, like the iPhone, you can use a finger to flick a picture or other object to move it on or off the center of the screen.

One thing I like better than the iPhone interface is Palm's use of "cards," which are like windows for applications and tasks. A web page would appear as a card as would an email message, an instant messaging session or any other application. You can have as many cards as you want and easily flick from one to another with a finger. This avoids cluttering up that little 3-inch screen with overlapping windows while still providing a multitasking environment. Nice touch.

Like the iPhone the Pre has WiFi, Bluetooth, GPS and 3G cellular data service. It will come only in an 8-gigabyte model. The good news is that the battery is removable, but unfortunately there's no card slot for additional memory. The phone also has a two megapixel camera with an LED flash.

A big difference between the Pre and the iPhone is that the Pre has a pull out physical QWERTY keyboard below the touch screen. The keys appear to be pretty small and close together but they are rounded in such a way as to make it pretty easy to avoid making mistakes - at least based on the one paragraph of text that I typed. Palm has a lot of experience building mobile devices and they know something about sculpting little keyboards. You can dial the phone with the keyboard or bring up an onscreen dial-pad. There is no optional on-screen QWERTY keyboard. It seems as if that would have been an easy thing to offer for people who want it.

What I like most about the Pre is the way it synchronizes data between the device and your various online profiles. Although you can plug in a USB cable to copy media and other files to the Pre, you don't use a cable to synch it to Outlook or other software as you would with the iPhone and most other smart phones. Instead, you give it your profile information for Gmail, Yahoo, Facebook and other "cloud" services and let it automatically gather information to populate your contact list and calendar. If you change data on the web or on the phone it automatically updates and it can assemble information from different sources. For example, it may grab a contact's business phone number from your Gmail contact list and that person's cell phone from his or her Facebook profile. If that person changes or adds contact information to his or her profile, the Pre gets it right away. Ultimately this could greatly simplify the way we keep up with our friends and associates by letting them update and maintain their own contact information that you access on your device.

As Apple proved with its application store, the ability to run third party programs is important to a lot of smart phone users. Palm is working with third party developers to create applications based on standard web development tools including HTML and CSS. Tom Conrad, the CTO of Pandora told me that his company was able to develop a Pre application in three days compared to the "three month process" it took to develop a similar application for the iPhone.

Palm has signed an exclusive deal with Sprint whose 3G network, from my experience, is quite good. For heavy users, Sprint offers a $99 per month "Simply Everything" plan. AT&T has a $99 unlimited voice plans but charges an extra $30 for a data plan.

The phone is expected to be available "in the first half of 2009" but pricing wasn't disclosed. I'm guessing it will cost about $199 to compete with Apple's 8-gigabyte iPhone.