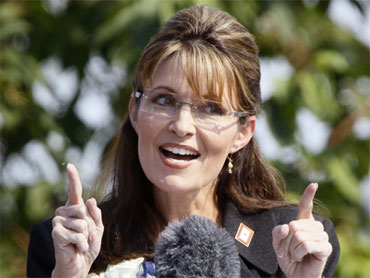 In a fiery speech that felt more like a partisan campaign rally than a formal transfer of power, outgoing Alaska Governor Sarah Palin reflected upon her administration's most significant achievements and shared her vision for the country's future. But the address was most notable for Palin's remarkably blunt swipes at her favorite nemesis: the media.

In her nearly 20-minute speech, which directly preceded incoming governor Sean Parnell's swearing in, Palin had only a few words to say about her successor, but she had plenty of advice for journalists.

Palin did not elaborate on her accusation, which in borrowing from her former running mate, John McCain, she described as "some straight talk," but the crowd on hand rewarded the line with its heartiest round of applause.

Her now several weeks old public feud with David Letterman over the late-night comedian's failed joke about one of her daughters was apparently still smarting, as she leaned forward into the microphone and added angrily, "One other thing for the media, our new governor has a very nice family, too, so leave his kids alone."

The heated tenor that Palin employed to lash out at the press and others who she said were "hell-bent on tearing down our nation," was the exclamation point on a dramatic turnaround in her relationship with the media, which had once been something close to symbiotic.

During her 2006 gubernatorial campaign and throughout her first year-and-a-half in office, Palin was widely considered a media darling in Alaska, where her fresh face and bold ideas signaled a dramatic departure from the wildly unpopular incumbent governor Frank Murkowski. After her term began, Palin persuaded no less than seven Alaska journalists to join her administration, most notably two veterans of Anchorage's dominant KTUU station, Meg Stapleton and later, Bill McAllister, to head her communications team.

But the honeymoon with the Alaska media ended during the "Troopergate" investigation, in which Palin was accused of allowing subordinates to try to pressure Public Safety Commissioner Walt Monegan to fire a state trooper who was also the ex-husband of the governor's sister. Palin's relationship with the press deteriorated further during her vice presidential campaign, and upon her return to Alaska, she has made her condemnations of the media something close to a daily ritual.

Judging from the positive reaction that her scathing criticism of the press received from the Fairbanks crowd on Sunday, Palin may have struck a chord among her fervent supporters. As she enters the national political arena full time, it will be interesting to see whether she continues to knock the media at every turn, or decides to pull back a bit, as several former campaign aides have advised her to do.

Of course, no one knows exactly what's next for Palin. "The world is literally her oyster," Stapleton, who remains Palin's spokesperson, told CNN shortly after the now former governor's July 3 announcement that she would step down.

Though the observation may be more figurative than literal, Stapleton has a point.

Yes, Palin's poll numbers have tanked since the heights she achieved after her resounding speech at the Republican National Convention in August of last year. Forty-four percent of Americans viewed her favorably in the CBS News poll taken then, while in the July 12, 2009 CBS News poll, only 26 percent had a favorable view.

But there is another number that should give Palin and her supporters hope that she may yet have a second life in national politics. A whopping thirty-nine percent of those polled in the most recent CBS News survey said that they were undecided or had not heard enough about her.

If a run for president in 2012 is in her future, and don't be so quick to count her out, she must focus on those 39 percent. After all, her most ardent backers will continue to support her no matter what.

Political strategists suggest she should spend the next couple of years immersing herself in the details of every domestic and foreign policy issue that she could possibly be asked to address.

But although she has actively sought the counsel of insiders like Republican financier Fred Malek and prominent Washington attorney John Coale, Palin has just as often dismissed well-intentioned advice as failed inside-the-beltway logic. After all, it was several of her former VP campaign aides who told her last November that she should focus on governing Alaska.

Sarah Palin's political instincts have been formidable in the past, and she continues to place her trust in them above all else.

She is set to hit the road in the Lower 48 and will be greeted by massive crowds wherever she goes. Palin will also raise money, make political friends, and help to ignite enthusiasm in the conservative base for Republican congressional candidates who are up for election in 2010.

Though she appears to have settled on perpetuating her antagonistic approach to the media, most political strategists, including many conservatives, suggest that she would be better off cultivating relationships with the press, as she did to such a successful degree during her early political career.

"Palin had become so suspicious of the media that she rejected hundreds of requests by even friendly reporters to interview her," Ronald Kessler wrote on Newsmax.com earlier this month. "Her press aides say that before considering interviews, she insists that they comb through reporters' work, even if they write for a friendly, conservative publication."

Historically, successful national candidates have learned to work with (and even manipulate) the media, rather than shutting it out. Palin's conviction that she has been wronged by the press may be heartfelt, but it is difficult to see how the long-term benefits of constantly berating journalists outweigh the negative impacts.