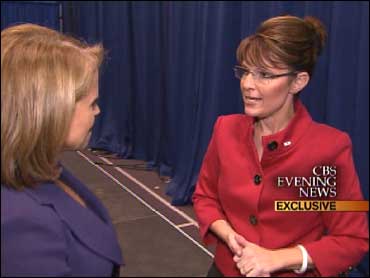 As they gear up for the one and only vice presidential debate on Thursday night in St. Louis, candidates Joe Biden and Sarah Palin spent part of today prepping - separately, of course. Before the debate preps, CBS News anchor Katie Couric spent some time with Alaska's Gov. Palin on the campaign trail. And in an exclusive interview, she spoke frankly about a number of controversial issues - including at least one disagreement with her running mate, Sen. John McCain. Read an unedited transcript of all the answers to Couric's questions that were broadcast Sept. 30.


The day began early. After being briefed by her staff, Sarah Palin heads out with her 14-year-old daughter Willow in tow.

"So nice to meet you," CBS News anchor Katie Couric said to Willow.

At 8 a.m., Palin hit the ground running - accompanied by Couric.

"Do you have any down-time, though?" Couric asked Palin.

First, a photo-op with hotel staff.

Then it's off to the McCain campaign plane, where CBS News was invited up front to ask a handful of questions. Couric asked Palin whether she considers herself a feminist.

"I do," Palin said. "I'm a feminist who, uh, believes in equal rights and I believe that women certainly today have every opportunity that a man has to succeed, and to try to do it all, anyway. And I'm very, very thankful that I've been brought up in a family where gender hasn't been an issue. You know, I've been expected to do everything growing up that the boys were doing. We were out chopping wood and you're out hunting and fishing and filling our freezer with good wild Alaskan game to feed our family. So it kinda started with that."

Before a rally in Columbus, Ohio, the candidates sat down with Couric for their first joint interview, where Couric and Palin focused on energy policy.

Couric: Gov. Palin, almost every expert says it will take about 10 years for domestic drilling to have an impact on consumers. So isn't the notion of "drill, baby, drill" a little misleading to people who think this will automatically lower their gas prices, and quickly?

Palin: And it's why we should have started 10 years ago tapping into domestic supplies that America is so rich in. Alaska has billions of barrels of oil and hundreds of trillions of cubic feet of clean, green natural gas onshore and off-shore. Should have started doing it 10 years ago, but better late than never. It's gotta be an all-of-the-above approach to energy independence.

Couric: Gov. Palin, I know you'd like to see drilling take place in the Arctic National Wildlife Refuge. And Sen. McCain, you oppose this. You call it, quote: "one of the most pristine and beautiful parts of the world."

McCain: Did you expect two mavericks to agree on - (laughter) to agree on everything? Look, I …we just have, we'll be talking more and more about this issue. We do agree on the off-shore drilling and other means of limiting our dependence on foreign oil. But for us to agree on everything would make us, I think, a little boring. You can … say a lot about us, but we're anything but boring.

Palin has brought plenty of energy to the campaign, attracting huge, enthusiastic crowds, like one at Capital University.

Her trademark feistiness is on display as she delivers a punchy sound bite about her rival, Joe Biden.

"I'm looking forward to meeting him, too. I've never met him before. But I've been hearing about his Senate speeches since I was in, like, second grade," she said at a campaign rally.

Couric: You have a 72-year-old running mate - is that kind of a risky thing to say, insinuating that Joe Biden's been around a while?

Palin: Oh no, it's nothing negative at all. He's got a lot of experience and just stating the fact there, that we've been hearing his speeches for all these years. So he's got a tremendous amount of experience and, you know, I'm the new energy, the new face, the new ideas and he's got the experience.

Couric: And when it comes to establishing your worldview, I was curious, what newspapers and magazines did you regularly read before you were tapped for this to stay informed and to understand the world?

Palin: I've read most of them, again with a great appreciation for the press, for the media.

Palin: Um, all of them, any of them that have been in front of me all these years.

Couric: Can you name a few?

Palin: I have a vast variety of sources where we get our news, too. Alaska isn't a foreign country, where it's kind of suggested, "Wow, how could you keep in touch with what the rest of Washington, D.C., may be thinking when you live up there in Alaska?" Believe me, Alaska is like a microcosm of America.

Then it's off to the bus where Palin sits down for a wide-ranging interview.

Couric: What's your position on global warming? Do you believe it's man-made or not?

Palin: Well, we're the only Arctic state, of course, Alaska. So we feel the impacts more than any other state, up there with the changes in climates. And certainly, it is apparent. We have erosion issues. And we have melting sea ice, of course. So, what I've done up there is form a sub-cabinet to focus solely on climate change. Understanding that it is real. And …

Couric: Is it man-made, though in your view?

Palin: You know there are - there are man's activities that can be contributed to the issues that we're dealing with now, these impacts. I'm not going to solely blame all of man's activities on changes in climate. Because the world's weather patterns are cyclical. And over history we have seen change there. But kind of doesn't matter at this point, as we debate what caused it. The point is: it's real; we need to do something about it.

Couric: If a 15-year-old is raped by her father, do you believe it should be illegal for her to get an abortion, and why?

Palin: I am pro-life. And I'm unapologetic in my position that I am pro-life. And I understand there are good people on both sides of the abortion debate. In fact, good people in my own family have differing views on abortion, and when it should be allowed. Do I respect people's opinions on this. Now, I would counsel to choose life. I would also like to see a culture of life in this country. But I would also like to take it one step further. Not just saying I am pro-life and I want fewer and fewer abortions in this country, but I want them, those women who find themselves in circumstances that are absolutely less than ideal, for them to be supported, and adoptions made easier.

Couric: But ideally, you think it should be illegal for a girl who was raped or the victim of incest to get an abortion?

Palin: I'm saying that, personally, I would counsel the person to choose life, despite horrific, horrific circumstances that this person would find themselves in. And, um, if you're asking, though, kind of foundationally here, should anyone end up in jail for having an … abortion, absolutely not. That's nothing I would ever support.

Palin: Well, I am all for contraception. And I am all for preventative measures that are legal and save, and should be taken, but Katie, again, I am one to believe that life starts at the moment of conception. And I would like to see …

Couric: And so you don't believe in the morning-after pill?

Palin: ... I would like to see fewer and fewer abortions in this world. And again, I haven't spoken with anyone who disagrees with my position on that.

Couric: I'm sorry, I just want to ask you again. Do you not support or do you condone or condemn the morning-after pill.

Palin: But personally, I would not choose to participate in that kind of contraception.

Couric: Do you believe evolution should be taught as an accepted scientific principle or as one of several theories?

Palin: Oh, I think it should be taught as an accepted principle. And, as you know, I say that also as the daughter of a school teacher, a science teacher, who has really instilled in me a respect for science. It should be taught in our schools. And I won't deny that I see the hand of God in this beautiful creation that is Earth. But that is not part of the state policy or a local curriculum in a school district. Science should be taught it science class.

The governor told us though she's not a member of any church, she visits a couple of them regularly when she's home. She took issue with news reports that one of them, The Wasilla Bible Church, sponsored a conference where gays could be made straight through prayer.

Palin: Well, it matters though, Katie, when the media gets it wrong. It frustrates Americans who are just trying to get the facts and … be able to make up their mind on, about a person's values. So it does matter.

But what you're talking about, I think, value here, what my position is on homosexuality and you can pray it away, because I think that was the title that was listed on that bulletin. And you know, I don't know what prayers are worthy of being prayed. I don't know what's prayers are going to be asked and answered. But as for homosexuality, I am not going to judge Americans and the decisions that they make in their adult personal relationships. I have one of my absolute best friends for the last 30 years happens to be gay, and I love her dearly. And she is not my "gay friend," she is one of my best friends, who happens to have made a choice that isn't a choice that I have made. But I am not going to judge people.

People may judge her after Thursday's debate, where she'll be unfiltered and unedited - something reporters complain the campaign has resisted.

Palin: The campaign knows that I am an open book. My record is out there and my life is out there.