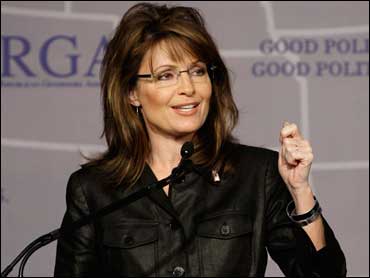 Sarah Palin called on fellow Republican governors to keep the new president and his strengthened Democratic majority in check on issues from taxes to health care as she signaled she'll take a leadership role in a party searching for a new standard-bearer.

Addressing the Republican Governors Association meeting Thursday, this year's GOP vice presidential nominee — and an oft-mentioned candidate for 2012 — revisited some aspects of the bitter campaign and talked about the role of the governors in the coming year. After losing the White House and several seats in the Senate and House, the party is engaging in some soul-searching about its direction.

"We are the minority party," Palin said at a session on "Looking Towards the Future: The GOP in Transition." "Let us resolve not to be the negative party."

Still, she took a swipe or two at President-elect Barack Obama. She said with governors, "the buck stops on our desk. ... We are not the many voting yea or nay or present." While an Illinois state lawmaker, Obama often voted "present," a practice the GOP criticized during the campaign.

Palin noted that Congress is led by the likes of House Speaker Nancy Pelosi, Senate Majority Leader Harry Reid and Rep. Barney Frank, and said it was incumbent upon GOP governors to ensure that the federal government doesn't take over the health care system. She said if Obama and the new Congress "err on the side of excess taxes, we have to show them the way."

"Let's reach out to Barack Obama," Palin said. "Show him how lower taxes provide opportunity for the private sector to grow."

Palin also displayed a sense of humor, telling the governors at the beginning of her remarks that she wanted to catch them up on the developments in her life since they last met.

"I had a baby, I did some traveling, I very briefly expanded my wardrobe, I made a few speeches, I met a few VIPs including those who really impact society like Tina Fey," she said to loud laughter.

Facing the prospect of being out of power at both ends of Pennsylvania Avenue for the first time since the 1992 election, Republicans are looking to their governors to fill the leadership vacuum. Speculation has centered on the telegenic Palin despite her tumultuous two months on the national political scene. She likely would have competition for a possible 2012 bid from Mississippi Gov. Haley Barbour, Florida Gov. Charlie Crist, Minnesota Gov. Tim Pawlenty and Louisiana Gov. Bobby Jindal — all in attendance at the three-day meeting.

Republican governors acknowledged that Palin would be a party leader.

In a series of national television interviews, Palin did not rule out seeking the presidency, saying, "It's crazy to close a door before you know what's even open in front of you."

Before briefly taking questions from reporters Thursday morning, Palin said, "I, like all of our governors, we're focused on the future. The future for us is not the 2012 presidential race. It's next year and our next budget, and the next reforms in our states and in 2010 we're going to have 36 governors' positions open across the U.S. That's what we're focused on."

Governors showed their support for Palin, who critics have said was ill-prepared to be vice president and may have cost Republican nominee John McCain support from independent and moderate voters. Undermining Palin's credibility and hockey mom image was her $150,000 wardrobe bought with GOP dollars and her halting interview performances.

Six in 10 Americans said Palin is not qualified to become president, according to exit polls of voters in last week's election. That included nine in 10 Democrats, nearly two-thirds of independents and a quarter of Republicans. The exit polls were conducted for The Associated Press and the television networks.

Twelve of Palin's peers joined her for the news conference, and Texas Gov. Rick Perry, the head of the RGA, praised before she made her remarks, describing Palin as "a governor who has led her state boldly, inspired a nation with her optimism, her frank talk, her unashamed embrace of bedrock conservative principles. She represents us, Republican governors, as well. And I can assure you, she's just getting started."