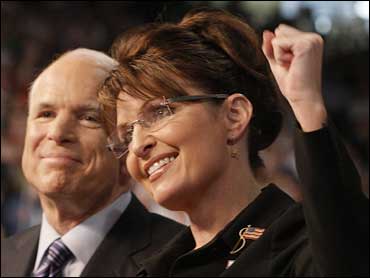 A month ago, in the afterglow of the GOP convention, the buzz on John McCain's surprise decision to tap Sarah Palin as his running mate was largely positive.

The Republican base, long skeptical of McCain, suddenly had its champion, a politician whose conservative views and unpretentious style made her easy to rally around. Women, some of whom maintained lingering anger over Hillary Clinton's loss in the Democratic primary, once again had a female face vying for their support. And everyday Americans, weary from a long campaign, had a new star: A striking young governor with a tabloid-friendly family and the sort of personal magnetism that made Barack Obama seem a bit like last season's celebrity.

At the time, it looked like McCain's gamble was paying off: In a post-convention survey earlier this month, the GOP ticket took its first lead over its Democratic counterpart in CBS News general election polling.

Following her successful entry onto the national stage, however, Palin has struggled. Though she continues to attract large crowds on the campaign trail and delight social conservatives, her performance in the past few weeks has raised questions, even among conservatives, about whether McCain made a wise choice.

As a result, Thursday's vice presidential debate is shaping up as a career-defining moment for Palin, one that could dictate whether she is ultimately remembered as the GOP's election-year savior or as an overwhelmed neophyte who never belonged on the national stage.

Conscious of the importance of Thursday's face-off with Democratic vice presidential candidate Joe Biden, Palin is in the midst of three days of intense debate preparation with McCain aides at the Arizona senator's Sedona ranch.

Though some believe that expectations have grown so low that Palin is virtually guaranteed to exceed them Thursday, there is a growing sense that the Alaska governor must do something positive to counteract the increasingly negative perception of her amongst opinion leaders.

"A week ago, for her to just not drool on herself and be commanding would have been enough," said CBS News consultant and former White House press secretary Dee Dee Myers. "I don't think that's really true anymore."

"The bar has gone up for her," said Myers. "I don't think it's quite enough for her now to just get through it. She needs to show some mastery of a topic."

Palin has been widely criticized for her performance in interviews with CBS Evening News anchor Katie Couric and ABC World News anchor Charlie Gibson, which yielded moments such as Palin's tortured defense of her claim that Alaska's proximity to Russia stands as a foreign-policy credential in an interview with Couric.

In the wake of that interview, conservative columnist Kathleen Parker, arguing that her "cringe reflex is exhausted," called on Palin to voluntarily leave the ticket. Palin has also received less-than-positive notices from conservatives such as David Frum, Rich Lowry and David Brooks, who called her candidacy "embarrassing," and been mocked on late-night comedy shows and cable news networks.

Criticism has also been leveled at Palin's handlers, who have limited the media's access to the Alaska governor to such a degree that the press briefly rebelled against the campaign's tight limits on access. Conservative columnist William Kristol suggested Monday that Palin needs to be "liberated" from "the former Bush aides brought in to handle her," arguing that the candidate should be freed "to use her political talents and to communicate in her own voice." That's a sentiment that has been echoed by other Republicans as well.

"Holding Sarah Palin to just three interviews and microscopically focusing on each interview I think has been a mistake," Mitt Romney, the former GOP presidential candidate, said in a television interview Monday. (Palin also spoke to Fox News' Sean Hannity.) "I think they'd be a lot wiser to let Sarah Palin be Sarah Palin."

"I do think the bar has been lowered and people will generally be surprised if she is able to string together several sentences on a topic, and I think she will be able to meet that minimum bar," he said. But, he adds, she "needs to have a couple moments where she demonstrates some knowledge that goes beyond the talking points."

Andrew Halcro, an Alaska politician who debated Palin more than two-dozen times, characterized Palin as a debater who is master of "the fine art of the nonanswer, the glittering generality" in a column Tuesday.

"Her ability to fill the debate halls with her presence and her gift of the glittering generality made it possible for her to rely on populism instead of policy," he wrote.

But while Palin's rhetorical gifts have helped her build a base of popular support that has stood by her even as elite opinion has shifted, they may not be enough to get her through a debate that detractors will be closely monitoring for evidence that she is not up to the office she seeks.

Palin thus faces a difficult balancing act: She must find a way to showcase the sort of policy knowledge that can help silence her critics while also showcasing the personal traits that made her such an asset to the GOP ticket in the first place.

The stakes are high, both for Palin, who is in danger of seeing her name forever linked to that of former vice president Dan Quayle, and for McCain, who last month took a big chance on the then-largely unknown Alaska governor.

"Because so many GOP opinion makers have concluded that Palin is not qualified, it becomes a question about McCain's decision," said Myers. "If she has a really bad performance, not only does it destroy her political future, but the discussion will become not about her future but about McCain's judgment."
By Brian Montopoli