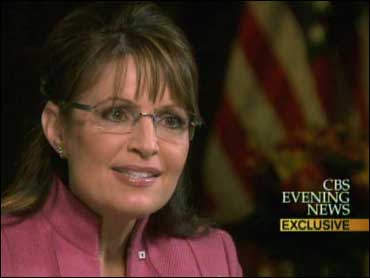 This week, CBS News anchor Katie Couric met with Republican vice presidential nominee Sarah Palin at the United Nations. Much of the discussion focused on foreign policy, which some say could be Palin's weakness. What follows is Part II of an exclusive interview with Gov. Palin. Read Part I here.

Katie Couric: As we stand before this august building and institution, what do you see as the role of the United States in the world?

Sarah Palin: I see the United States as being a force for good in the world. And as Ronald Reagan used to talk about, America being the beacon of light and hope for those who are seeking democratic values and tolerance and freedom. I see our country being able to represent those things that can be looked to … as that leadership, that light needed across the world.

Couric: In preparing for this conversation, a lot of our viewers … and Internet users wanted to know why you did not get a passport until last year. And they wondered if that indicated a lack of interest and curiosity in the world.

Palin: I'm not one of those who maybe came from a background of, you know, kids who perhaps graduate college and their parents give them a passport and give them a backpack and say go off and travel the world.

No, I've worked all my life. In fact, I usually had two jobs all my life until I had kids. I was not a part of, I guess, that culture. The way that I have understood the world is through education, through books, through mediums that have provided me a lot of perspective on the world.

Couric: Gov. Palin, you've had a very busy week. And you're meeting with many world leaders. You met with President Karzai of Afghanistan. I know the McCain campaign has called for a surge in Afghanistan. But that country is, as you know, dramatically different than Iraq. Why do you believe additional troops, U.S. troops, will solve the problem there?

Palin: Because we can't afford to lose in Afghanistan, as we cannot afford to lose in Iraq, either, these central fronts on the war on terror. And I asked President Karzai, "Is that what you are seeking, also? That strategy that has worked in Iraq that John McCain had pushed for, more troops? A counterinsurgency strategy?" And he said, "yes." And he also showed great appreciation for what America and American troops are providing in his country.

Couric: The United States is deeply unpopular in Pakistan. Do you think the Pakistani government is protecting al Qaeda within its borders?

Couric: You've cited Alaska's proximity to Russia as part of your foreign policy experience. What did you mean by that?

Sarah Palin: That Alaska has a very narrow maritime border between a foreign country, Russia, and, on our other side, the land-boundary that we have with Canada. It's funny that a comment like that was kinda made to … I don't know, you know … reporters.

Couric: Well, explain to me why that enhances your foreign-policy credentials.

Palin: Well, it certainly does, because our, our next-door neighbors are foreign countries, there in the state that I am the executive of. And there…

Couric: Have you ever been involved in any negotiations, for example, with the Russians?

Palin: We have trade missions back and forth, we do. It's very important when you consider even national security issues with Russia. As Putin rears his head and comes into the air space of the United States of America, where do they go? It's Alaska. It's just right over the border. It is from Alaska that we send those out to make sure that an eye is being kept on this very powerful nation, Russia, because they are right there, they are right next to our state.

Couric: When President Bush ran for office, he opposed nation-building. But he has spent, as you know, much of his presidency promoting democracy around the world. What lessons have you learned from Iraq? And how specifically will you try to spread democracy throughout the world?

Palin: Specifically, we will make every effort possible to help spread democracy for those who desire freedom, independence, tolerance, respect for equality. That is the whole goal here in fighting terrorism also. It's not just to keep the people safe, but to be able to usher in democratic values and ideals around this, around the world.

Couric: You met yesterday with former Secretary of State Henry Kissinger, who is for direct diplomacy with both Iran and Syria. Do you believe the U.S. should negotiate with leaders like President Assad and Ahmadinejad?

Palin: I think, with Ahmadinejad, personally, he is not one to negotiate with. You can't just sit down with him with no preconditions being met. Barack Obama is so off-base in his proclamation that he would meet with some of these leaders around our world who would seek to destroy America and that, and without preconditions being met. That's beyond naïve. And it's beyond bad judgment.

Couric: Are you saying Henry Kissinger …

Couric: … is naïve for supporting that?

Palin: I've never heard Henry Kissinger say, "Yeah, I'll meet with these leaders without preconditions being met." Diplomacy is about doing a lot of background work first and shoring up allies and positions and figuring out what sanctions perhaps could be implemented if things weren't gonna go right. That's part of diplomacy.

Couric: You recently said three times that you would never, quote, "second guess" Israel if that country decided to attack Iran. Why not?

Palin: We shouldn't second guess Israel's security efforts because we cannot ever afford to send a message that we would allow a second Holocaust, for one. Israel has got to have the opportunity and the ability to protect itself. They are our closest ally in the Mideast. We need them. They need us. And we shouldn't second guess their efforts.

Couric: You don't think the United States is within its rights to express its position to Israel? And if that means second-guessing or discussing an option?

Palin: No, abso … we need to express our rights and our concerns and …

Couric: But you said never second guess them.

Palin: We don't have to second-guess what their efforts would be if they believe … that it is in their country and their allies, including us, all of our best interests to fight against a regime, especially Iran, who would seek to wipe them off the face of the earth. It is obvious to me who the good guys are in this one and who the bad guys are. The bad guys are the ones who say Israel is a stinking corpse and should be wiped off the face of the earth. That's not a good guy who is saying that. Now, one who would seek to protect the good guys in this, the leaders of Israel and her friends, her allies, including the United States, in my world, those are the good guys.