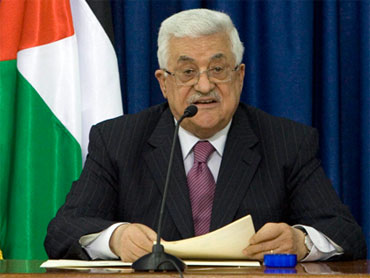 Palestinian President Mahmoud Abbas has pushed Mideast peace prospects into unknown territory by announcing he doesn't want another term and opening the way to a succession battle that could play into the hands of his rival, the militant Hamas.

But it also could boost the prospects of a popular candidate who reportedly wants to run for the presidency from his Israeli prison cell.

Abbas blamed his decision on the stalemate in peace talks, but the wording of his televised speech late Thursday raised speculation that it was not final and could be a tactic for pushing Israel and the U.S. toward a larger compromise.

He said only that it was "desire not to run in the upcoming elections" which are set for January but could be delayed, extending his current term indefinitely.

Abbas took over after the death of Yasser Arafat in 2004, and Western leaders have come to see him as a symbol of moderation. Although criticized as indecisive and associated with the corruption-tainted old guard of his Fatah party, he has given free rein to his prime minister, Salam Fayyad, to reform the West Bank's economy and boost its police, which has resulted in a limited economic upturn.

But the stalemate with Israel overshadows all, and Fatah activists say the party is in a panic, fearing a fragmented slate of candidates that would hand victory to Hamas.

Late last month, Abbas told U.S. Secretary of State Hillary Rodham Clinton that he would not run, but recanted after President Obama called him and expressed his commitment to Mideast peacemaking, Abbas' aides said. A senior Palestinian official told The Associated Press that Abbas informed other Fatah leaders of his latest decision several days ago but didn't tell Mr. Obama.

Insiders say he was disheartened by Washington's refusal to press Israel harder for a freeze on West Bank settlement construction, and that this week's visit by Clinton, when she appeared to side with Israel over the settlement issue, was the last straw.

Abbas has insisted that he won't resume negotiations until Israel stops all construction.

If he were to concede on that issue, Fatah could lose the election. If that happened, the international community would have no one to deal with but Hamas, which denies Israel's right to exist and rejects the two-state solution endorsed by Fatah.

The most attractive candidate to replace 74-year-old Abbas would likely be Marwan Barghouti, 49, who was jailed for life in 2002 for his involvement in fatal Palestinian attacks.

Activists say Barghouti, the top West Bank Fatah official until his arrest, is determined to run from prison. The charismatic Palestinian was once a favorite of Israeli peace activists but turned increasingly militant. His refusal to recognize the Israeli court's right to try him, and his defiant gestures and smiles for the cameras, heightened his popularity among Palestinians.

He ran for president from his cell in 2004 but withdrew under pressure from Fatah leaders. This time, associates say, he is determined to stay in the contest.

Barghouti's incarceration could work both for and against him. It might be difficult for him to campaign from a jail cell, but his nomination could force his release. Also, imprisonment has shielded him from blame for the absence of a peace accord with Israel, a shattered West Bank economy and Hamas in power in Gaza.

Yossi Sarid, an Israeli former lawmaker identified with the peace movement, said Israel and the U.S. humiliated Abbas, leading to his decision. "This means that we are probably entering a terrible period where the extremists will run the show," Sarid said.

In case Abbas steps down, Fatah insiders are promoting Nasser Al-Kidwa, 50, as a candidate. He has served as the Palestinian representative at the U.N., is not linked with the corruption that bedevils the party, and has the additional benefit of being Arafat's nephew.

Another potential candidate is Mohammed Dahlan, 48, a one-time Fatah strongman in Gaza. He was recently elected to the top Fatah policy-making body, but he is blamed by many for losing Gaza to Hamas, and is tainted by allegations of corruption.

Hamas spokesman Taher Nunu said he didn't believe Abbas really meant to step down. "His speech wasn't for the Palestinians alone," he said. "It was for the United States and the international community, so they will give him more support in the elections."

After Abbas' speech, Clinton praised his leadership in working toward the creation of a Palestinian state next to Israel. Speaking to reporters in Washington, she ignored a question about whether she would urge Abbas to stay on and saying only that she would go on working with him to advance peace.