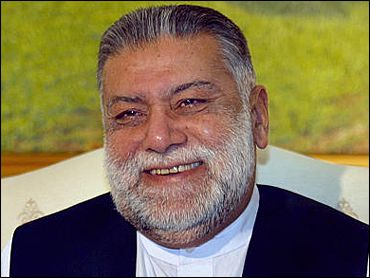 Crew members detained a Pakistani national who tried to enter the cockpit of a plane traveling to Pakistan from the United Arab Emirates on Thursday, a day after the prime minister revealed a hijacking plot against commercial flights on the route, officials said.

Information Minister Sheikh Rashid Ahmed said crew members arrested one Pakistani man on a flight from Dubai to Islamabad, but could not confirm whether he was intending to hijack the plane.

"The man told investigators that he wanted to tell the pilot he should increase the speed of the plane as it was going too slow," Ahmed told The Associated Press. He said authorities were still investigating.

An intelligence official in the southern city of Karachi said the man was unarmed and was overpowered by crew members on Aeroasia flight E4553, which landed safely in Islamabad.

The man was handed over to the Airport Security Force there and was being questioned, the official said on condition of anonymity.

The arrest came a day after Prime Minister Zafarullah Khan Jamali revealed that Pakistani intelligence agents had uncovered a plot by a small band of terrorists to hijack and possibly blow up a plane bound for the United Arab Emirates from Pakistan. The threat prompted Pakistan to put its airports on "red alert."

Jamali told AP that authorities believe there was a group of about four to six people who wanted to hijack a plane.

There was no indication when the plot was due to be carried out or if it involved al Qaeda. Jamali would not speculate on whether the hijackers were Pakistanis or foreigners.

A senior official at Pakistan's intelligence agency said Wednesday that authorities are not sure who the men are.

"If we had their names and nationalities or other information about their whereabouts, they would have been arrested already," he said on condition of anonymity.

Details of the plot emerged late Wednesday after Pakistan announced it was beefing up security at 35 airports nationwide. Access to airport facilities has been severely restricted, extra security checks are being made on all domestic and international passengers and more security personnel have been assigned to the airports, said Maj. Mohammed Riaz, assistant director of intelligence for the Pakistan Airport Security Force.

"We got the information from our intelligence network, not from a threatening phone call or letter," Riaz said. "We don't know what group it is. We can't say whether it is al Qaeda."

The threat prompted three airlines to request sky marshals for their flights from Pakistan to the United Arab Emirates, an intelligence official said on condition of anonymity Thursday in the southern city of Karachi. He would not name the airlines.

Airlines in Pakistan said flights to the United Arab Emirates were operating as normal, but that security arrangements and flight operations were being reviewed.

The United Arab Emirates is the main financial hub of the Arab world. Dubai is also a regional transit hub and there are about 20 flights a day from the Pakistani cities of Islamabad, Karachi and Lahore. PIA, Emirates airlines, Gulf Air, Malaysian Air and Aeroasia fly to the Emirates from Pakistan.

In March, the U.S. Embassy in Abu Dhabi and the consulate in Dubai briefly shut their doors after receiving a "specific threat," though there was no indication it was connected to the recent Pakistani alert.

Pakistan has been beset by a string of terror attacks since President Gen. Pervez Musharraf threw his support behind the U.S. war on terror following the Sept. 11, 2001, attacks.

Musharraf himself survived two suicide attacks in December, and dozens have been killed in attacks on foreigners and minority Christians. The president blamed the assassination attempts on al Qaeda.

A bus bombing killed three Chinese engineers working on a major port project in the remote southwest on Monday.

In March, a bomb was defused outside the U.S. Consulate in Karachi.