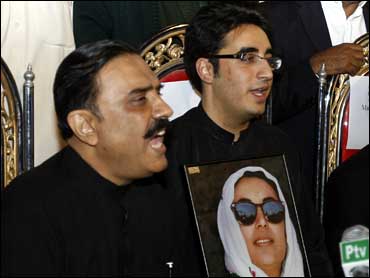 Elections in Pakistan look set to be delayed by several weeks despite demands by the party of slain opposition leader Benazir Bhutto and other politicians they take place as scheduled on Jan. 8, officials said Monday.

Sources inside the Pakistani government say the election will likely be pushed back at least four weeks, and possibly as many as eight or nine, CBS News chief foreign correspondent Lara Logan reports.

The Election Commission said it had recommended an unspecified delay in the parliamentary polls following unrest triggered by the assassination of opposition leader Bhutto last week. It said its final decision would be made on Tuesday.

Meanwhile, new video of Bhutto's killing raised new questions about the government's version of how she died, while the country's most prominent living opposition politician urged U.S-backed President Pervez Musharraf to step down Monday and be replaced by a national unity government.

"He is a one man calamity," former Prime Minister Nawaz Sharif told reporters. "The United States should see that Musharraf has not limited or curbed terrorism. In fact terrorism is now stronger than ever before with more sinister aspects.

Separately, a senior government official predicted the elections would be postponed by "six weeks or so as the environment to hold free and fair elections is not conducive." The official spoke on condition of anonymity because he was not authorized to disclose the information.

Despite being in mourning, Bhutto's political party and that of Pakistan's other major opposition leader want the polls held on time, perhaps sensing major electoral gains are possible amid sympathy at Bhutto's death and accusations that political allies of President Pervez Musharraf were behind the killing. The government has rejected the charges.

Western governments are also urging the government to go ahead with the polls without major delays. They see the elections as a key step in U.S.-backed plans to restore democracy to the nation as it battles Taliban and al Qaeda militants.

Bhutto was killed in a suicide bomb and gun attack on Thursday, but disagreements between her supporters and the government over the precise cause of death are undermining confidence in Musharraf and adding to calls for international investigators to probe the killing.

The video footage, obtained by Britain's Channel 4, shows a man firing a handgun at Bhutto from close range as she stands up in an open-topped vehicle. Her hair and shawl then move upward, suggesting she may have been shot. She then falls into the vehicle just before an explosion rocks the car.

The government has insisted Bhutto was not hit by any of the bullets and died after the force of the blast slammed her head against the sunroof. Bhutto's family and supporters say she died from gunshot wounds to her head and neck.

Bhutto's husband said late Sunday he refused permission for doctors to perform an autopsy, meaning that short of exhuming her body - something her supporters have already ruled out - the cause of her death will be difficult to establish.

After days of rioting that left at least 44 dead, life in many Pakistani cities began returning to normal, though soldiers and police patrolled many areas. The streets were still quiet in the southern city of Karachi, the scene of some of the worst violence, witnesses said.

On Sunday, Bhutto's political party officially named her 19-year-old son, Bilawal Zardari, as its symbolic leader and left day-to-day control to her husband, extending Pakistan's most enduring political dynasty. Bilawal also announced he was changing his last name to Bhutto.

"My mother always said democracy is the best revenge," he said late Sunday at an emotionally charged media conference at Bhutto's ancestral home. "The party's long struggle for democracy will continue with renewed vigor," he said.

Tariq Azim, a spokesman for the pro-Musharraf Pakistan Muslim League-Q party, congratulated the decision not to seek a delay in the vote and said "we are also ready for the contest on Jan. 8." Earlier, he predicting the election may be delayed up to four months.

The appointment of Bhutto's husband, Asif Ali Zardari, as effective leader was not without complications. A former Cabinet minister who spent eight years in prison on corruption accusations, he is known as "Mr. 10 Percent" for allegedly taking kickbacks and is viewed with suspicion by many Pakistanis.

Zardari said the opposition party - Pakistan's largest - had no confidence in the government's ability to bring his wife's killers to justice and urged the United Nations to establish a committee like the one investigating the 2005 assassination of former Lebanese Prime Minister Rafik Hariri. Several leading U.S. politicians have made similar calls.

The British and U.S. governments had been pushing Bhutto, a moderate Muslim seen as friendly to the West, to form a power-sharing agreement with Musharraf after the election - a combination seen as the most effective in the fight against al Qaeda, which is believed to be regrouping in the country's lawless tribal areas.