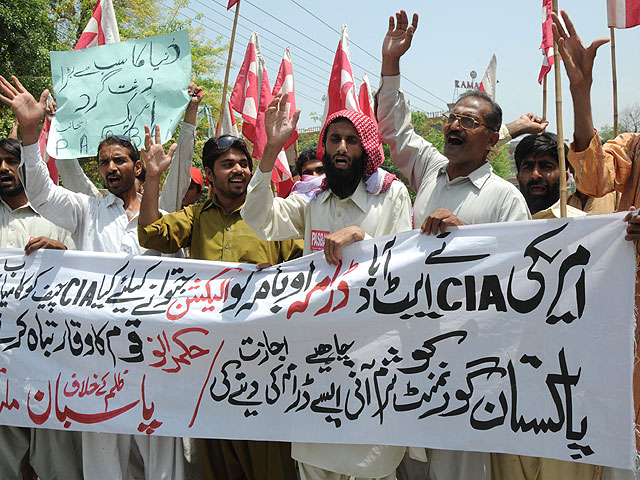 Pakistan's army admitted "shortcomings" in its effort to find Osama bin Laden, but the anger over the unauthorized U.S. raid was still fresh as officials said American military personnel in the country will be reduced to the "minimum essential" levels.

The statement also said that if the United States launches a similar raid in the future then the army and intelligence services will review their ties with Washington.

The statement is the first by the army since Monday's raid.

Pakistan alliance "too big to fail" for U.S.?

Earlier Thursday, Pakistan's Pakistan Foreign Secretary Salman Bashir warned America Thursday of "disastrous consequences" if it carries out any more raids and hit back at international allegations it may have been harboring the al Qaeda chief.

But the government in Islamabad stopped short of labeling Monday's helicopter raid on bin Laden's compound an illegal operation and insisted relations between Washington and Islamabad remained on course.

With calls from some U.S. lawmakers to cut aid to Pakistan following the raid, the European Union said it would not turn its back on the nuclear-armed nation that is seen by many as key to helping negotiate an end to the war in Afghanistan.

The army and the government have come under criticism domestically for allowing the country's sovereignty to be violated. Some critics have expressed doubts about government claims that it was not aware of the raid until after it was over or scolded it for not reacting quickly enough and shooting down the helicopters.

Bashir's remarks seemed to be aimed chiefly at addressing that criticism.

"The Pakistan security forces are neither incompetent nor negligent about their sacred duty to protect Pakistan," he told reporters. "There shall not be any doubt that any repetition of such an act will have disastrous consequences," he said.

Bashir repeated Pakistani claims that it did not know anything about the raid until it was too late to stop it. He said the army scrambled two F-16 fighter jets when it was aware that foreign helicopters were hovering over the city of Abbottabad, not far from the capital Islamabad, but they apparently did not get to the choppers on time.

American officials have said they didn't inform Pakistan in advance, fearing bin Laden could be tipped off.

Elements of Pakistan's army and Inter-Services Intelligence agency have long been suspected of maintaining links to Islamist militants, mostly for use as proxies in Afghanistan and Pakistan. While the country has worked with the United States to arrest many al Qaeda operatives since 2001, suspicion lingers it is playing a double game.

The leaders of Britain and France, as well as U.S. officials, have said Pakistan has questions to answer over bin Laden's location in a large house close to an army academy in a garrison town.

Bashir said it was "absolutely wrong" to blame the ISI. "After all there was information within the U.S. system about those who were ultimately, eventually responsible for the 9/11 (attacks), so it's not for me to say that the U.S. government or the CIA failed to prevent that," he said.

While some U.S. lawmakers have taken a tough line, President Barack Obama and other American officials have been more cautious, realizing that downgrading or severing ties with the country would be risky.

Speaking at a diplomatic conference in Rome, Secretary of State Hillary Clinton maintained the U.S. must remain engaged with Pakistan.

"It is not always an easy relationship," she said. "But on the other hand, it is a productive one for both of our countries and we are going to continue to cooperate between our governments, our militaries, our law enforcement agencies."

Appearing on "The Early Show" Thursday, Sen. Charles Schumer, D-NY, said that the U.S. has "to pay more attention, not less, to Pakistan."

"I would guess that our number one foreign policy problem over the next 10 years will be Pakistan. It's nuclear. It's poor. It's ethnically divided and it's never had good leadership."

Bashir said perceptions that Pakistan's ties with Washington were at rock bottom were untrue.

"We acknowledge the United States is an important friend," he said. "Basically Pakistan and U.S. relations are moving in the right direction."

EU spokesman Michael Mann said Thursday "there can be no doubt" Pakistan would remain an important partner in the region even amid the allegations.