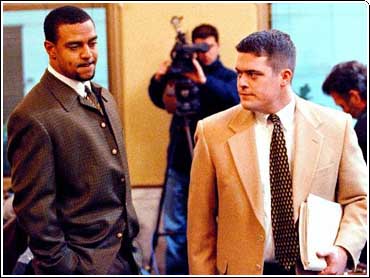 Antonio Freeman of the Green Bay Packers was sentenced Tuesday to a year on probation after pleading no contest to lying to police about a traffic accident.

Freeman also was fined $1,000, ordered to pay $315 in court costs and do 50 hours of community service. He had faced a maximum punishment of nine months in jail and a $10,000 fine on a misdemeanor charge of obstructing police.

Brown County Circuit Judge William Griesbach also ordered the Packers' wide receiver to pay the medical bills of a woman injured in the accident last December. The costs of her medical bills have not been determined, District Attorney John Zakowski said.

Freeman made no statement to the judge before he was sentenced, but told reporters after the hearing that he took responsibility for the accident.

"I regret dearly the accident that occurred back in December and I accept and will cooperate with the consequences that have been given to me," Freeman said.

Freeman and wide receiver Charles Jordan were in separate cars Dec. 22, 1999 when Freeman's vehicle went over a curb and hit a light pole in the driveway of an Allouez restaurant, the Brown County Sheriff's Department said.

Freeman told officers he was a passenger in the other vehicle, authorities said. Brown County sheriff's deputies arrested Jordan on a charge of causing injury by operating a vehicle while intoxicated.

Jordan has pleaded innocent to the obstruction charge and is due back in court March 9. He also faces a one-year revocation of driving privileges for refusing to submit to a blood sample after the accident, authorities said.

Packers general manager Ron Wolf had no comment on the case itself, team spokesman Lee Remmel said. As for any punishment from the team, "it is an issue that has been resolved by our legal system and that is punishment enough," Wolf said in a statement issued through Remmel.

Greg Aiello, a spokesman for the NFL in New York, declined to comment on the case.

Jordan, who signed on with the team in December, played for the Packers in 1994-95 as a receiver and kick returner. Freeman just completed his fifth season with Green Bay.