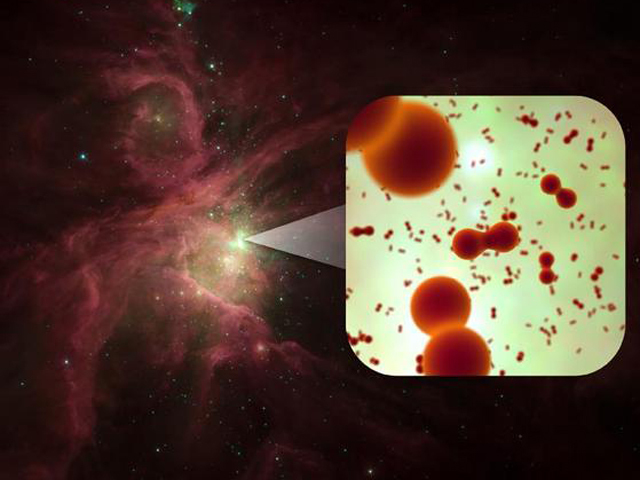 Astronomers can finally breathe a sigh of relief: A team of scientists has discovered the first oxygen molecules in deep space, capping a nearly 230-year search for the elusive cosmic molecule.

The oxygen molecules were detected in a star-forming region of the Orion nebula, roughly 1,500 light-years from Earth, by the European Space Agency's Herschel Space Observatory. The observatory used its large telescope and infrared detectors to hone in on the species, which is thought to be common in the cosmos, but has so far been hard to find.

Individual atoms of oxygen (called atomic oxygen) are common in space, particularly around massive stars. But molecular oxygen, which is formed of two bonded oxygen atoms and makes up about 20 percent of the air we breathe on Earth, has eluded astronomers until now.

"Oxygen gas was discovered in the 1770s, but it's taken us more than 230 years to finally say with certainty that this very simple molecule exists in space," Paul Goldsmith, NASA's Herschel project scientist at the agency's Jet Propulsion Laboratory in Pasadena, Calif., said in a statement. Goldsmith is lead author of a recent paper describing the findings in the Astrophysical Journal.

Astronomers searched for the elusive oxygen molecules in space for decades using balloons, as well as ground- and space-based telescopes. The Swedish Odin telescope spotted the molecule in 2007, but the detection could not be confirmed. The discovery by the Herschel team has been confirmed, cementing the existence of molecular oxygen in space.

Goldsmith and his colleagues suggest that oxygen is actually locked up in water ice that coats tiny dust grains. They think the oxygen detected by Herschel in the Orion nebula was formed after starlight warmed the icy grains, releasing water, which was converted into oxygen molecules.

"This explains where some of the oxygen might be hiding," said Goldsmith. "But we didn't find large amounts of it, and still don't understand what is so special about the spots where we find it. The universe still holds many secrets."

The researchers plan to continue their hunt for oxygen molecules in other star-forming regions.

"Oxygen is the third most common element in the universe and its molecular form must be abundant in space," said Bill Danchi, Herschel program scientist at NASA Headquarters in Washington. "Herschel is proving a powerful tool to probe this unsolved mystery. The observatory gives astronomers an innovative tool to look at a whole new set of wavelengths where the tell-tale signature of oxygen may be hiding."