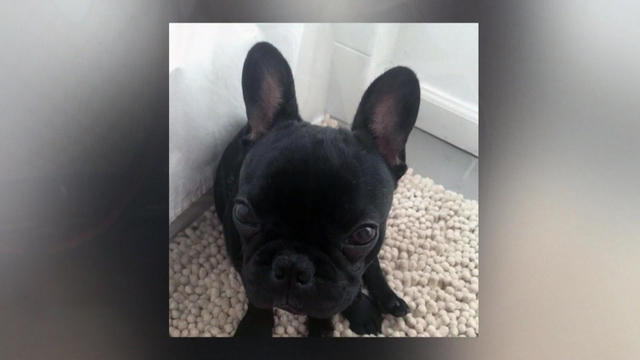 A grieving family is speaking out after, they say, a United Airlines  flight attendant forced them to put their dog in an overhead bin, where he died in flight. The 10-month-old French bulldog was kept there for the entire three-and-a-half hour trip Monday from Houston to New York. The family heard him barking in the overhead compartment for two hours. The airline has apologized.

United Airlines issued a statement accepting full responsibility for the incident, which it says is under investigation. Still, many are wondering how an experienced flight attendant could let this happen, reports CBS News transportation correspondent Kris Van Cleave.

"He was a really special dog. It's just sad the way he has to, just leave," said 11-year-old Sophia Ceballos. For Sophia and her mother, Catalina Robledo, Kokito was part of the family.

Robledo put the dog in a carrier but struggled to put Kokito's carrier under the seat in front of her. The family says a flight attendant insisted it go in the overhead bin.

The family says they heard Kokito barking for two hours, then he stopped. They wanted to check on him but couldn't.

"We tried, but there was a lot of turbulence. And we weren't allowed to stand up," Sophia said.

When the flight was over, they found Kokito had died. A fellow passenger posted a photo of the dog, saying, "My heart broke with theirs as I realized he was gone."

In a statement United said: "This was a tragic accident that should never have occurred, as pets should never be placed in the overhead bin. We assume full responsibility for this tragedy and express our deepest condolences."

"There is no circulation at all in there," Kelly said. "They're scared, their heart rate goes up and they use more oxygen. And there's not enough oxygen in the first place, that just makes it worse."

The American Kennel Club says a French bulldog's short face can make its breathing less efficient, and the animals stress easily, increasing their need to breathe.

Kokito's owners hope others learn from this death. The family says the flight attendant claimed afterward that she didn't know there was a dog inside the bag. She's been described as distraught.

We have spoken to the family, our crew and a number of passengers who were seated nearby. We have learned that the customer did tell the flight attendant that there was a dog in the carrier. However, our flight attendant did not hear or understand her, and did not knowingly place the dog in the overhead bin. As we stated, we take full responsibility and are deeply sorry for this tragic accident. We remain in contact with the family to express our condolences and offer support.

To prevent this from happening again, by April we will issue bright colored bag tags to customers traveling with in-cabin pets. This visual tag will further help our flight attendants identify pets in-cabin.