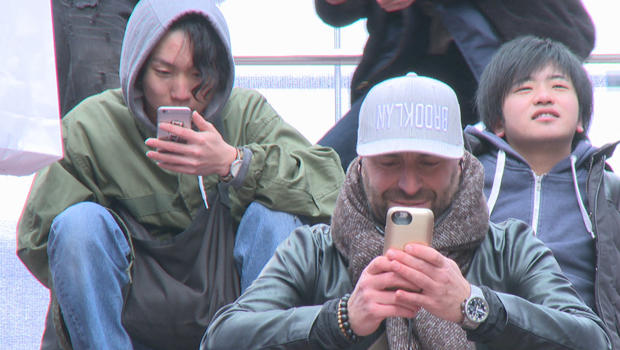 Smartphones and other gadgets deliver a wealth of information, but are they also delivering an OVERLOAD to our senses? Our Cover Story is reported by Sunday Morning Senior Contributor Ted Koppel:

Fifty, sixty years ago, television was the threat. It would, we feared, rot our children's minds, and our minds -- diminishing our attention span, addicting millions to mindless drivel.

There are those who say, "And they were right!"

So, what's different about today and the internet?

"I think every technology that changes the way people live inspires exaggerated hopes and fears," said technology critic Nicholas Carr, who has spent most of the past decade worrying, and warning, about the dangers of social media and the internet -- posing the famous question: "Is Google making us stupid?"

"We've never had a technology like a smartphone, where it's with us all the time," Carr said. "So, I think this is something new in human history. And I think we're starting to see the science -- behavioral science, sociological science -- that is pointing to how deeply this technology is affecting us, because we're using it so intensely."

That's the focus of Byron Reeves' research. He's a professor, a "media psychologist," at Stanford University. Reeves developed a way to accurately track our digital lives. How do those two-to-three hours a day spent on the phone break down?

Take, for example, a news story on "Sunday Morning":  "How long does one last -- two minutes? Ten minutes?" asked Reeves.

"This one will probably last nine, ten minutes," said Koppel.

"I'll just talk about Stanford students for a second. If you put software on laptop computers and smartphones to measure how long they spent with any given segment of life that they intend to do -- how long they wrote their paper, how long they watch a news story -- it's about ten seconds."

Koppel interjected: "But wait a second: I've got a nine-minute piece here! I want 'em to watch the whole damn thing!"

"Not gonna do it, most likely!" Reeves replied. "It's going to be atomized, and fragmented."

"It could be," Reeves said. "But oftentimes we find it's done with a progression of screens that at least kind of make sense to me. 'Cause you might've said something that's really important to me in minute two, and I want to get right to that."

Nicholas Carr said, "What becomes important to us is the next new thing that comes along in a matter of seconds; that's what grabs our attention. And not only do we begin to ignore the need to think deeply and quietly and contemplatively about things, but we begin to see that as a waste of time, because it stops you from grabbing the next new bit of information."

Facebook was the first among the social media companies to turn those short and shallow attention bites into a hugely profitable business model. They realized that advertisers could just be given what amounts to a one-click road map to our brains -- showing them, as we flitted from one subject to another, what we liked and didn't like.

Meet Justin Rosenstein, co-inventor of the "Like" button: "The idea was, 'Could we make it one-click, really easy for people to be able to share little bits of positivity and affirmation in the world?'"

"And when did you first come to realize that there were, I don't know if you want to describe them as problems, 'complications'?" asked Koppel.

"Yeah, it's been interesting to see how it's played out as this kind of double-edged sword. I think it's very dangerous right now to have a business model in which the way that these companies make money is by selling people's attention to advertisers," said Rosenstein. "So, regardless of whether they have good or bad intentions, the financial incentives just lean you more and more toward trying to get people to stare at their phones.

The notion that major news outlets see themselves as professional gatekeepers carries less and less weight: "The gatekeepers, the editorial gatekeepers, the journalistic gatekeepers have been overthrown," said Carr. "And I think there was a general sense that was liberating in the early days of the web and the internet: 'We can do this ourselves, it will democratize media.'

"And we now know that those enemies, the people we thought were our enemies, the gatekeepers, actually played a very valuable role."

While Facebook and Twitter are undertaking efforts to limit the spread of mis-information online, the fact remains that all these internet companies see themselves as distribution vehicles without any clear editorial responsibility.

And in 1996, Congress actually passed legislation to that effect -- Section 230 of the Communications Decency Act: "They were simply a platform which information flowed on," said Sen. Mark Warner, of Virginia, one of the tech industry's best-informed and sternest critics. "So there was no responsibility to curate, police, or in any way review the information that appeared on your platform."

Koppel asked, "What would happen if they began exercising real discipline over what goes out? And we're talking, what, billions of items a day?"

"Billions of items a day. And these companies would fight against that regulation tooth-and-nail," Warner said.

The internet, the senator reminds us, has been weaponized: Interference in our elections; threats to our infrastructure; undermining confidence in our institutions.

"My fear is that we may be investing in the best 20th century planes, tanks and guns, when much of the conflict in the 21st century will be in the realm of mis-information, dis-information and cyberwarfare," Warner said. "And I'm not sure we're ready."

Carr added, "I think ultimately that's the question -- whether as a public we have the kind of sense of a democratic future to make hard choices about what we pay attention to, how we think about things, or whether we let the devices and the social media determine that for us."

"You don't seriously think that we have that kind of discipline, do you?" Koppel asked.

"I don't see any evidence of it," Carr replied.

Justin Rosenstein left Facebook some years ago. Today, he's the co-founder of Asana -- a software company that enhances workplace productivity.

"There are a lot of concerns that I have about [how] technology will continue to erode our attention span, make it harder for us to focus on important social issues, make it harder for us to think clearly, which is critical to having a functioning democracy," Rosenstein said. "At the same time, I think there's a huge opportunity for us to re-imagine these tools and redesign them, in order to be a huge boon for civilization.

"The opportunity there is for us to become the most informed, most compassionate populace of all times, and to be the most functioning democracy of all times. But it's a real fork in the road. I worry that, if we continue with business-as-usual, we run the risk of kind of walking off the cliff of civilization while staring at our phones."