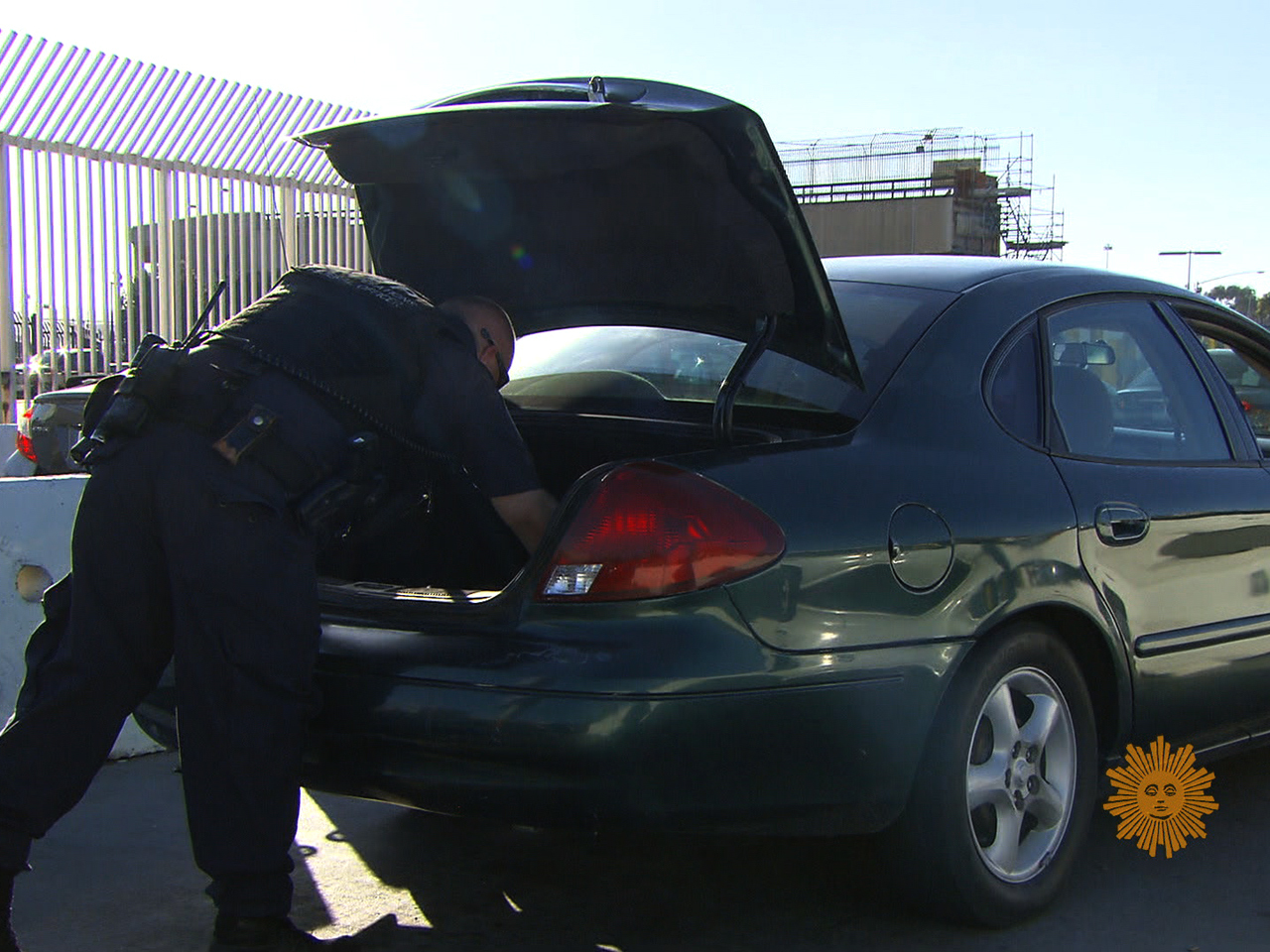 (CBS News) When it comes to securing our southern border, at least a few border agents have been stepping OVER THE LINE, ethically speaking, which leaves some Americans living near the border feeling not very secure. Sharyl Attkisson now with our Cover Story along the border between Arizona and Mexico:

John Ladd owns 14,000 wild acres in southern Arizona squared up against the Mexican border. It's land that's become extremely valuable for something besides ranching: For Mexico's illegal immigrants and drug cartels, it's a golden pathway into the U.S.

"The easy part of getting across here is you got three miles to walk, and that's it," said Ladd. "You get picked up at the highway and you're gone."

Five generations of Ladds have lived here. The family journeyed west over gritty trails in covered wagons in 1894.

More than a century later, Ladd watches from his kitchen window as new immigrants -- the illegal kind -- regularly march across his land, oddly undeterred by the border fence, government surveillance cameras, and Border Agents patrolling the property.

When asked how many illegal immigrants he estimates have crossed his property, Ladd replied, "I say about a half a million people have been caught on the ranch. And that's what's been caught - that's not what's got through."

The past few years, the sheer number of Mexicans and those of other nationalities caught on his property IS down.

But Ladd says there's more illegal traffic coming in trucks, filled with drugs. He showed Attkisson where a wall on his property has been cut three times since February: "They sets ramps up on top. They have ramp going into Mexico, have a ramp coming in here. They drive the loaded trucks over the ramps, get 'em in. Come up and cut all of my fences going to the highway."

A recent video from Yuma, Arizona, shows how they do it. The vehicle got stuck with its front end in the U.S., and its tail in Mexico. The passengers ran south.

"The south side is all controlled by the cartel now," said Ladd. "And the cartel has evolved to where they know what they're doing, and there's a lot of money at stake. And Border Patrol is still doing the same thing, deterring and chasing and, you know, we're not deterring anything and we're not doing very well chasing 'em."

Ladd has come up with an astonishing theory as to why the battle seems so futile: He believes some of the federal agents entrusted with policing the border are on the take, working with Mexico's drug cartels.

"There's a lot of people in a lot of positions that can be tempted," Ladd told Attkisson. "I don't think the general public knows how much money is involved with the people trade and the drug trade, and the bribe money to allow it to be coming into the U.S. is astronomical."

More than 40,000 U.S. Customs and Border Protection agents guard the nation's borders, and the vast majority are honest. But drug cartels are working harder than ever to infiltrate their ranks.

"They're using Cold War-style tactics: Money, sex, drugs to convince officers to work with them, and to help get their products and their people across the border," said Special Agent Terry Reed, part of the FBI's ever-expanding operation working to root out corruption.

Reed said that in 2007 there were only six border corruption task forces. Today there are 24.

One of Reed's areas of responsibility is San Ysidro, Calif., at the U.S.-Mexico border, the largest land port of entry in the world. It processes 110,000 people a day. Reed told Attkisson that, just a couple of weeks earlier, an officer has been arrested at the San Ysidro port of entry on corruption charges.

There have been more than just a few bad apples.

A new report from the Department of Homeland Security's Inspector General lists 358 convictions of Customs and Border Protection employees and their associates since 2004.

Complaints of misconduct are up by 77 percent.

The case of Officer Michael Gilliland is notorious.

He was a very senior agent. "He taught all the new people at the port," said Reed. "But he was also passing loads, many loads of undocumented illegal aliens through the border."

In FBI surveillance video Gilliland was seen allegedly carrying a cash payoff in a bag. He plead guilty to taking $120,000 in bribes to let in hundreds of illegal immigrants.

There's also Agent Michael Gonzalez, captured by a police camera loading pot into his vehicle; Agent Marcos Manzano, Jr., caught harboring illegal immigrants in his family's house; and Officer Luis Alarid. Turns out the FBI had gotten a tip and was watching him off-duty, and on the job. In surveillance video he is seen waving through a white minivan.

"Inside the van are 18 undocumented people, all of them paying upwards of $5,000 to $8,000 per person to a smuggling organization for passage into the United States," said Reed.

"What's the officer's cut of something like that?" asked Attkisson.

"Well, we know from interviews with Luis Alarid that he was making $2,000 per person."

"That's right," said Reed. "That's a substantial sum of money for somebody who had only been on the job a few weeks and was probably making somewhere around $60,000 a year."

Customs and Border Protection officials say they ARE taking steps to expose and prevent corruption. The agency recently began requiring lie detector tests -- but only ONCE, upon hiring.

Christopher Maston oversees all U.S. ports of entry for the agency, which employs more than 60,000 people.

"Is it a hard job to think that everyone who's hired here has to be beyond corruption? That if $10,000 is basically waved in front of their face, they'll be able to say no?" asked Attkisson.

"I have to be focused like a laser beam on that vulnerability," said Maston. "It's their dream to have somebody on the inside working for them. It's my responsibility to make sure that doesn't happen."

But investigators say what worries them even more is the serious threat to national security -- the fear that terrorists could slip in.

From 2006-2011, along the Southwest border, the Border Patrol apprehended 1,918 illegal immigrants from 35 countries designated as states that could harm the U.S. with terrorism.

Which makes this taped confession all the more chilling: the corrupt officer Alarid admits helping smuggle in a hundred people.

Alarid: "Ain't nobody that I know of that's a bin Laden or something."
FBI Agent Reed: "Well, I'm glad to hear that."

"The problem is that, because no inspection's taking place, they really have no way of knowing what's in the vehicles," said Reed. "They don't know who they're letting into the country. And that unknown is what scares us all."

And on John Ladd's ranch, the steady stream continues.

"Sixteen or seventeen different types of nationalities have been caught on the ranch that I know about," he said. "So why, why do you want to think something isn't gonna happen bad?"

And he worries not only about the cost to his bottom line but, more importantly, to his way of life.

"You got to lock your doors at night, and you got guns layin' around. You got guns in the truck. You worry about your mother, your dad, your wife," Reed said. "You want to live like that?

"I'm a rancher. I don't want to live like that. But it's every day, and it costs a lot of money, wear and tear, stress. I'm getting to the point I don't have any confidence in our government, our system, or anybody trying to enforce the border."

For more info:
Thanks for reading CBS NEWS.
Create your free account or log in
for more features.
View CBS News In
CBS News App Open
Chrome Safari Continue
Be the first to know
Get browser notifications for breaking news, live events, and exclusive reporting.