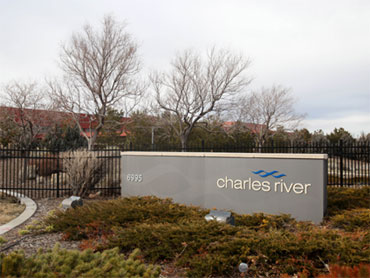 Workers at a Nevada research lab were checking on a primate room when they came across a ghastly sight: Thirty dead monkeys were essentially cooked alive after someone left the heater on. Two others were near death and had to be euthanized.

At a lab run by the same company, a monkey died last year after it was sent through an automatic cage washer. The temperatures were so scalding the monkey never had a chance.

The two cases have led to calls for greater oversight and enforcement of the animal research industry after an alarmingly high number of deaths in recent years.

Critics say fines for violations at animal research labs are so puny that they do nothing to deter violations. The lab where the monkeys died in Nevada was fined a mere $14,000 for the two incidents, according to records from the U.S. Department of Agriculture.

"The penalties have given them virtually no motivation whatsoever to cease violating the law," said Michael Budkie, the executive director of the Ohio-based Stop Animal Exploitation Now. "If they are literally killing animals through negligence, something is wrong with the system."

Agriculture Department records show there were 97 negligent animal deaths at research facilities nationwide over the last two years, a figure that does not include lab mice and rats.

One of the biggest violators was Charles River Laboratories, where the 33 monkeys died at facilities in Reno in 2008 and Sparks in 2009.

The Massachusetts-based company is one of the world's largest suppliers of clinical and laboratory research services to pharmaceutical and biotech companies.

It also is a leading importer of research animals and breeds some of its own animals for medical research. Its researchers in Nevada are working to find a cure for cancer, new flu vaccines and better ways to treat obesity.

Spokeswoman Amy Cianciaruso said survival rates for major diseases are at an all-time high thanks to the discovery of new drugs made possible in part by the work of scientists at Charles River labs. The company has called the monkey deaths a "terrible and unfortunate tragedy," but said they were isolated cases and corrective actions were taken. Agriculture Department records show one employee was fired and another disciplined.

"Charles River's work is an essential component of the research that has led to these discoveries and has played a vital role in medical advances for humans as well as animals," Cianciaruso said.

The dead monkeys represent a tiny fraction of the tens of thousands of primates used for research around the country.

Charles River is one of 26 registered U.S. importers of non-human primates, a group that includes zoos, universities and private labs, said Christine Pearson, a spokeswoman for the National Center for Emerging and Zoonotic Infectious Diseases of the Centers for Disease Control and Prevention.

Together they imported 27,388 animals in fiscal year 2008 and have averaged approximately 25,000 primates per year over the past four or five years, she said. Charles River alone reported it housed nearly 10,000 primates nationwide in 2008.

Congress first passed the Animal Welfare Act in 1966 and amended it in the 1980s to set new minimum standards for dogs used in research and the psychological well-being of primates. It was amended again in 2008, raising fines from $2,500 to the current $10,000 per violation for negligent acts.

Budkie said if the Agriculture Department fails to act on its request for an investigation into research animal deaths, his group will appeal to Congress to step up enforcement and raise fines.

The monkey deaths have become a public relations headache for Charles River, an 8,000-employee company that had sales of $1.2 billion in 2009.

The company's roots date to the 1940s when a young veterinarian, Dr. Henry L. Foster, bought a Maryland rat farm and began breeding the rodents in Boston. Foster later began breeding Rhesus monkeys following a trapping expedition in the foothills of the Himalayas.

Those animals were used to create a stock of 800 that were transported to two isolated islands in the Florida Keys, where workers trapped 400 to 500 young a year to sell to labs around the world.

Charles River remains a frequent target of animal rights activists over what happened in the primate quarantine room on May 28, 2008.

A series of errors began when a repair technician left the heater in the "ON" position at 8:20 a.m. An alarm three minutes later warned the temperature in the primate room had risen to an unsafe 84 degrees (29 Celsius), but no one noticed it, a Department of Agriculture report shows. Another alarm went undetected nearly two hours later.

It wasn't until 12:30 p.m. that lab personnel found 30 dead monkeys. Surviving monkeys were moved to a cooler location and given fruit; two later had to be put down.

Workers quickly opened the doors to circulate air and gently sprayed down the monkeys with a hose, according to a government report. It's not known how hot it got in the quarantine room.

It wasn't the only problem for the company.

Another monkey died after going through a cage washer last year. In 2007, Agriculture Department reports show two monkeys at the now-closed Sparks lab had fingers amputated after they were caught in the wiring of their cages while being moved, and a third monkey suffered a cut to the tip of its tail.

In addition, the former director of laboratory sciences at the Sparks lab has filed a civil lawsuit accusing the company of mistreating research animals, falsifying records to cover up the abuse and firing him in October 2007 for complaining about it.

The company denied the allegations and said the worker was fired because he made derogatory and sexual comments to women.

Charles River refused a request from The Associated Press to tour its Reno facility.

The company says it has moved beyond the monkey deaths.

"We have discussed the incidents in Reno extensively. We don't have anything new to add about that," Cianciaruso said. She said that as a matter of policy, the company doesn't respond to "animal activist groups."

"They just make false claims so we don't engage in a 'he said, she said' back and forth," she said.

Release of "The Interview" a test for industry