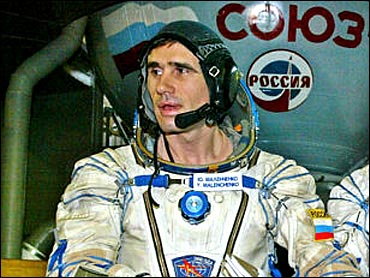 It's almost a match made in heaven. Or at least, in the heavens.

Russian cosmonaut Yuri Malenchenko, now on a mission at the international space station, plans next month to marry Ekaterina Dmitriev, who will remain firmly on Earth.

Officials say it will be the first-ever marriage from space.

On Thursday, the couple was issued a marriage license by the Fort Bend County Clerk's Office.

"This shows you that long-distance relationships do work," Dmitriev told the Houston Chronicle shortly after receiving the license.

Malenchenko, soaring 240 miles over the Pacific Ocean, was able to call Dmitriev at the courthouse from a special Internet phone on the space station.

Texas law allows weddings in which one of the parties is not present. They plan to marry Aug. 10.

"This is the first time a marriage license has ever been issued to somebody who is not on this Earth," County Clerk Dianne Wilson told the newspaper in Friday's editions.

A Russian space expert and a NASA official agreed, saying no one in space has ever received a marriage license or gotten married while in orbit.

"This certainly is a first time. People have had birthdays. They have been there when their kids were born, but never this," said Jim Oberg, a space expert and author.

Dmitriev left Russia for the United States with her parents when she was 3 and lives in Houston. The two met at a social gathering five years ago and began dating in 2002.

Malenchenko, 41, returned to Russia to train for his upcoming space mission, but the two continued their relationship via telephone. The cosmonaut proposed in December.

Because Malenchenko was preparing for an upcoming space shuttle mission and there was no time to plan a wedding, they decided to get married while he was still in space.

Malenchenko is scheduled to return to Earth in late October.