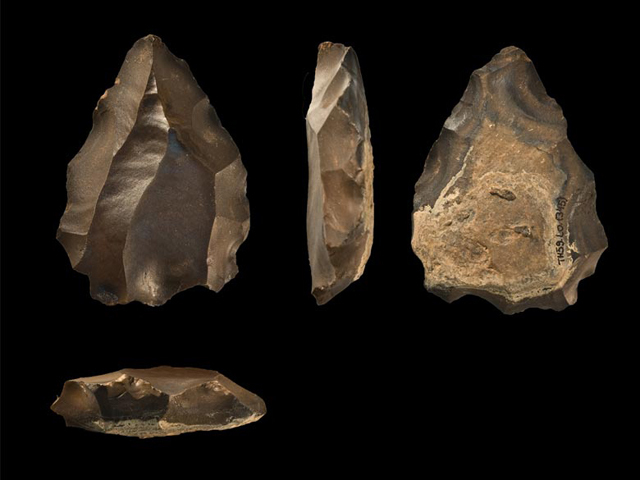 Modern humans first arose about 200,000 years ago in Africa. When and how our lineage then dispersed has long proven controversial, but geneticists have suggested this exodus started between 40,000 and 70,000 years ago. The currently accepted theory is that the exodus from Africa traced Arabia's shores, rather than passing through its now-arid interior.

However, stone artifacts at least 100,000 years old from the Arabian Desert, revealed in January 2011, hinted that modern humans might have begun our march across the globe earlier than once suspected.

Now, more-than-100 newly discovered sites in the Sultanate of Oman apparently confirm that modern humans left Africa through Arabia long before genetic evidence suggests. Oddly, these sites are located far inland, away from the coasts.

"After a decade of searching in southern Arabia for some clue that might help us understand early human expansion, at long last we've found the smoking gun of their exit from Africa," said lead researcher Jeffrey Rose, a paleolithic archaeologist at the University of Birmingham in England. "What makes this so exciting is that the answer is a scenario almost never considered."

The international team of archaeologists and geologists made their discovery in the Dhofar Mountains of southern Oman, nestled in the southeastern corner of the Arabian Peninsula.

"The coastal expansion hypothesis looks reasonable on paper, but there is simply no archaeological evidence to back it up," said researcher Anthony Marks of Southern Methodist University, referring to the fact that an exodus by the coast, where one has access to resources such as seafood, might make more sense than tramping across the desert..

On the last day of the research team's 2010 field season, the scientists went to the final place on their list, a site on a hot, windy, dry plateau near a river channel that was strewn with stone artifacts. Such artifacts are common in Arabia, but until now the ones seen were usually relatively young in age. Upon closer examination, Rose recalled asking, "Oh my God, these are Nubians — what the heck are these doing here?"

The 100-to-200 artifacts they found there were of a style dubbed Nubian Middle Stone Age, well-known throughout the Nile Valley, where they date back about 74,000-to-128,000 years. Scientists think ancient craftsmen would have shaped the artifacts by striking flakes off flint, leading to distinctive triangular pieces. This is the first time such artifacts have been found outside of Africa.

Subsequent field work turned up dozens of sites with similar artifacts. Using a technique known as optically stimulated luminescence dating, which measures the minute amount of light long-buried objects can emit, to see how long they have been interred, the researchers estimate the artifacts are about 106,000 years old, exactly what one might expect from Nubian Middle Stone Age artifacts and far earlier than conventional dates for the exodus from Africa.

Finding so much evidence of life in what is now a relatively barren desert supports the importance of field work, according to the researchers.

"Here we have an example of the disconnect between theoretical models versus real evidence on the ground," Marks said.

However, when these artifacts were made, instead of being desolate, Arabia was very wet, with copious rain falling across the peninsula, transforming its barren deserts to fertile, sprawling grasslands with lots of animals to hunt, the researchers explained.

"For a while, South Arabia became a verdant paradise rich in resources — large game, plentiful fresh water, and high-quality flint with which to make stone tools," Rose said.

Instead of hugging the coast, early modern humans might therefore have spread from Africa into Arabia along river networks that would've acted like today's highways, researchers suggested. There would have been plenty of large game present, such as gazelles, antelopes and ibexes, which would have been appealing to early modern humans used to hunting on the savannas of Africa.

"The genetic signature that we've seen so far of an exodus 70,000 years ago might not be out of Africa, but out of Arabia," Rose told LiveScience.

So far the researchers have not discovered the remains of humans or any other animals at the site. Could these tools have been made by now-extinct human lineages such as Neanderthals that left Africa before modern humans did? Not likely, Rose said, as all the Nubian Middle Stone Age tools seen in Africa are associated with our ancestors. [Photos: Our Closest Human Ancestor]

It remains a mystery as to how early modern humans from Africa crossed the Red Sea, since they did not appear to enter the Arabian Peninsula from the north, through the Sinai Peninsula, Rose explained. "Back then, there was no land bridge in the south of Arabia, but the sea level might not have been that low," he said. Archaeologists will have to continue combing the deserts of southern Arabia for more of what the researchers called a "trail of stone breadcrumbs."

The scientists detailed their findings online Nov. 30 in the journal PLoS ONE.