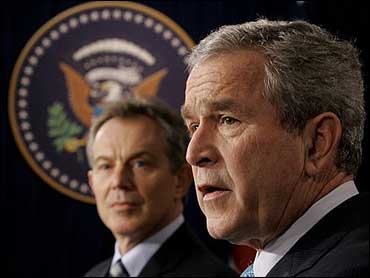 It was in Winston Churchill's famous Iron Curtain speech delivered in Fulton Missouri that he used the term "special relationship" to describe the U.S. and Britain.

Indeed, Churchill had a special relationship with President Roosevelt during the Second World War, and he saw the two countries standing together against communism.

Over the years, the special relationship has had its ebbs and flows. It was cool when Harold Wilson refused to send British troops to Vietnam, as President Johnson asked. It was warm indeed between Ronald Reagan and Margaret Thatcher.

However, the special relationship has seemingly never been stronger than it is now, between President Bush and Prime Minister Tony Blair, even though they come from different ends of the political spectrum. They have connected, in perhaps an unprecedented way.

Blair has been tight with the President really since 9/11. He's gone against the wishes of his own party and the British people to support the U.S. by sending troops to Iraq. He's taken some big political risks and people are asking, why?

From both sides of the Atlantic, we are now hearing this special relationship has been all one way, that Blair has had no influence on President Bush on any issue, not on the war, not on the environment.

In Washington, senior State Department analyst Kendall Myers described the special relationship as "totally one-sided." He said he felt "a little ashamed" at Mr. Bush's treatment of Blair. "No payback," Myers said, "No sense of reciprocity." He said Blair had been "left ruined for all time by the Iraq war."

According to Myers, the effect of this one-sided relationship would be a drawing back from the U.S. The next British leader would keep their distance. He said when it comes to America, "London's bridge is falling down."

This theme was picked up by the London-based (and well-respected) International Institute for Strategic Studies. In a report this week it said Blair's legacy would be the "disaster" of Iraq and his failure to influence the Bush administration in "any significant way," despite Britain's military, political and financial help.

The London think-tank went further, saying the post war "debacle" damaged Britain's global influence. Echoing Myers, it predicted the next British leader would improve relations with Europe at the expense of ties with the U.S.

This week Blair even took it on the chin from the Iraqi Vice President. He said Blair had been "brainwashed" by Mr. Bush.

It could be these are subjective assessments. Perhaps a better insight into the special relationship between the two leaders comes from an open microphone at last summer's G8 Summit. To get his attention, the president says, "Yo, Blair ..."

It's difficult to imagine such a summoning by President Roosevelt; "Yo, Churchill ..."

Later, Mr. Bush asks in relation to a trade issue: "Are you planning to say that or not?" To which Blair responds, "If you want me to."

It's also hard to imagine any American leader doing the bidding of a British Prime Minister in this way.

It is not likely the next British leader will totally jettison the special relationship, but a distancing will go down well domestically with the voters.

Winston Churchill spoke of the U.S. and Britain as equals. Many now have a view that equality has not been a quality of the current special relationship.