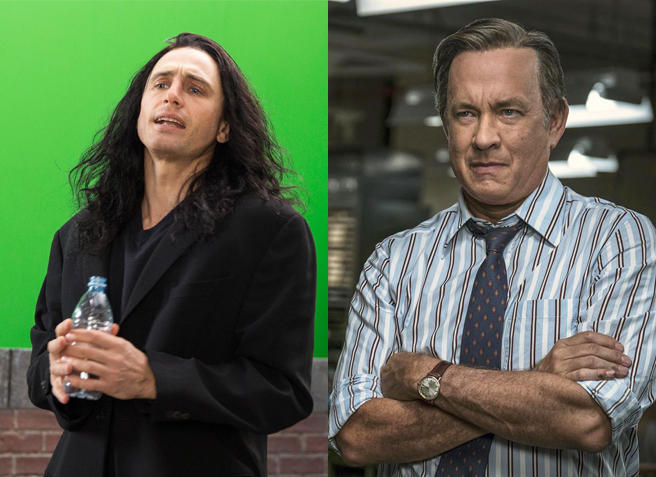 Timing is everything. Just ask James Franco, whose recent Golden Globe win for his comedic performance in "The Disaster Artist" made him a front-runner for a Best Actor Oscar nomination. Thanks, perhaps in part, to the allegations of sexual harassment that followed his Globes victory speech, Franco's name was absent from this morning's announcement of this year's Academy Award nominations.

And while Daniel Day-Lewis will be up for his fourth Best Actor Oscar (for what he claims is his final film role), a few other actors giving exceptional performances were left off this year's nominees list, including Tom Hanks ("The Post"), Robert Pattinson ("Good Time"), Charlie Hunnam ("The Lost City of Z"), Ali Fazal ("Victoria & Abdul"), "War for the Planet of the Apes" star Andy Serkis (the Actors Branch still doesn't go for motion capture performances), and -- don't kill me here -- Adam Sandler for "The Meyerowitz Stories (New and Selected)."

Also missing: Jessica Chastain for "Molly's Game," Florence Pugh for "Lady Macbeth," Salma Hayek for "Beatriz at Dinner," Michelle Williams for "All the Money in the World," Kate Winslet for "Wonder Wheel," and Gal Gadot, for giving a realistic portrayal of a superhero in "Wonder Woman."

Supporting categories also yielded surprises: Armie Hammer, terrific as the older object of attraction in "Call Me By Your Name," was passed over, as were fellow cast mate Michael Stuhlbarg;  Laurence Fishburne, for "Last Flag Flying"; and Steve Carell for "Battle of the Sexes." Tiffany Haddish, a popular choice among critics for "Girls Trip," did not make the Best Supporting Actress list, nor did Hong Chau for "Downsizing," Catherine Keener for "Get Out," Naomi Watts in "The Glass Castle," or Holly Hunter, for "The Big Sick."

Among happier surprises: Two directors making their feature debuts, Greta Gerwig ("Lady Bird") and Jordan Peele ("Get Out") nabbed nominations, over such veterans as Steven Spielberg ("The Post") and Martin McDonagh ("Three Billboards Outside Ebbing, Missouri"). Also missing from the directors' list: Craig Gillespie, for his terrific faux-documentary "I, Tonya," and Luca Guadagnino, for his sensitive handling of "Call Me By Your Name." The lack of directing nominations for films up for Best Picture will likely hurt those films' chances overall, as winners rarely make it without at least a directing nomination.

Christopher Nolan nonetheless received his first directing nomination ever, for "Dunkirk," so that might count as a surprise, too.

The Best Picture category -- boasting nine candidates this year -- did find room for the usual suspects on this year's awards circuit, including "Get Out," "Lady Bird," "Dunkirk," "The Shape of Water," "Call Me By Your Name" and "Three Billboards Outside Ebbing, Missouri," but also films that were actors' showcases, such as "Darkest Hour," "Phantom Thread" and "The Post." According to balloting procedures, as Academy members rank their choices on ballots, a film has to accumulate at least 5 percent of entries in a No. 1 slot to make it to the shortlist, which means fewer than five percent of the Academy's membership felt that "The Big Sick," "The Disaster Artist," "The Florida Project," "I, Tonya," "Logan," "The Lost City of Z," "Star Wars: The Last Jedi," or "Wonder Woman" was the best picture of the year.

In technical categories, there were no major surprises of omission (barring a lack of costume nomination for "Star Wars: The Last Jedi," which would have been nice). But we will have to wait until the awards are announced, on March 4, to find out whether master cinematographer Roger Deakins -- up this time for "Blade Runner 2049" -- will go home empty-handed for the 14th time. He's up against "Dunkirk"'s IMAX dogfights, "The Shape of Water"'s liquid romanticism, and "Mudbound"'s muddy realism (thanks to Rachel Morrison, the very first woman ever nominated in this category).