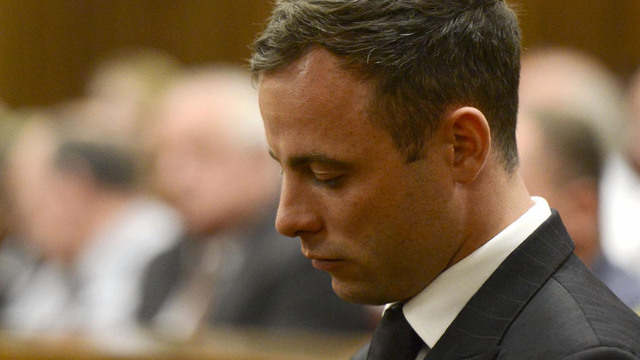 JOHANNESBURG -- A South African appeals court threw out double-amputee track star Oscar Pistorius' manslaughter conviction in the shooting death of his girlfriend, and convicted him instead of murder.

Five of the nation's most senior judges ruled that the original trial court judge, Thokozile Masipa, got it completely wrong.

The accused should have been found guilty of murder in the first place on the basis that he fired the fatal shots through his bathroom door late on Valentine's Day night, 2013, with criminal intent.

South Africa's Supreme Court of appeal said Masipa's ruling of manslaughter was flawed in that she ignored key ballistic evidence.

The former Paralympian track star maintained all through the trial that he shot and killed his model girlfriend Reeva Steenkamp because he mistook her for an intruder.

Masipa believed Pistorius, and absolved him of murder. However, the Appeal Court found that Pistorius intended to kill whoever he believed was behind that locked door.

"The identity of his victim is irrelevant to his guilt," explained retired Judge Chris Greenland, who said the case would now be referred back to Masipa for resentencing.

Steenkamp's mother June was in court Thursday and looked visibly relieved at the decision.

Pistorius's family said their legal team was still reviewing the ruling and they would not be commenting at this stage.

Pistorius is still out on parole, under house arrest at his uncle's luxury home, and will not go back to prison until he has been resentenced -- and that could happen anytime between now and the new year.