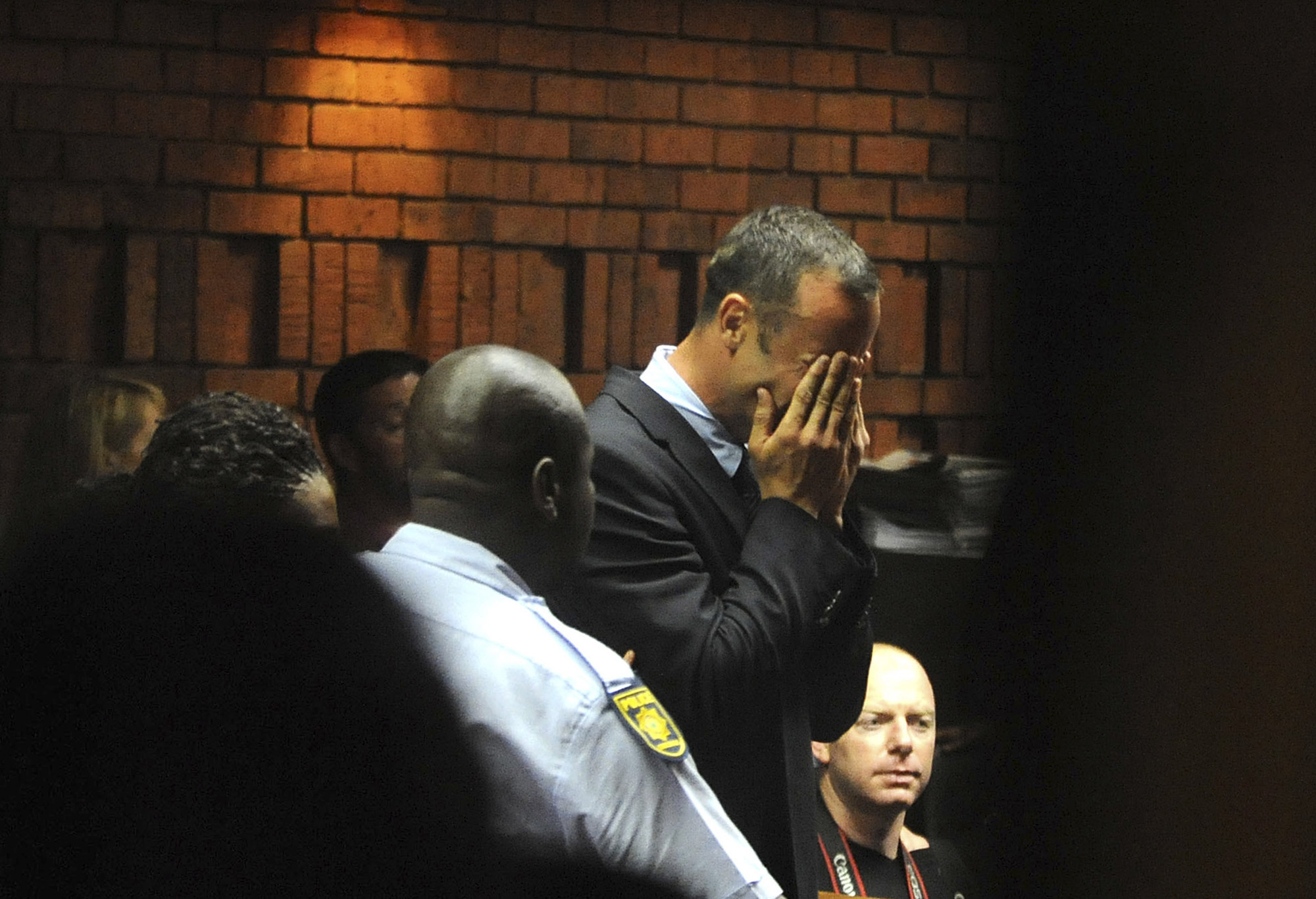 PRETORIA, South Africa Olympic superstar Oscar Pistorius wept in court Friday as prosecutors said they'll pursue a charge of premeditated murder against him for killing his model girlfriend, meaning the man who once inspired the world could spend the rest of his life in prison.

Pistorius was formally charged at Pretoria Magistrates Court with one count of murder for the slaying of his girlfriend, Reeva Steenkamp, a model and budding reality TV show contestant. The 30-year-old was shot multiple times and died at Pistorius' upmarket home early Thursday morning.

Prosecutor Gerrie Nel said Friday in court it was premeditated murder, indicating the prosecution would file that more serious charge, upgraded from murder.

The double-amputee athlete's arrest and murder charge had already left South Africa stunned after Steenkamp's death on Valentine's Day at Pistorius' house in a gated community in an eastern suburb of South Africa's capital, Pretoria.

Sky News' Emma Hurd, reporting for CBS News from Pretoria, said Pistorius' father tried to comfort his weeping son as the official murder charge was read, and other family members also sobbed in the public gallery. Hurd said South Africa had drafted in its top prosecutors to pursue the case, and Pistorius had hired a high-profile defense team, setting the stage for a real court room drama.

Following the hearing, Pistorius' family and his London management company issued a statement calling into question the criminal charge the 26-year-old athlete faces.

"The alleged murder is disputed in the strongest terms," the statement read. The statement did not elaborate.

The statement also said Pistorius wanted to "send his deepest sympathies to the family of Reeva."

"He would also like to express his thanks through us today for all the messages of support he has received — but as stated our thoughts and prayers today should be for Reeva and her family — regardless of the circumstances of this terrible, terrible tragedy," the statement read.

Those who knew Pistorius, including a former girlfriend, also weighed in on social media.

Trish Taylor, mother of Pistorius' ex-girlfriend Samantha Taylor, wrote on Facebook: "I'm so glad Sammy is safe and out of the clutches of that man."

But another ex-girlfriend, Jenna Edkins, defended Pistorius in messages Friday on Twitter.

"All I am saying is let him speak, let his side be heard without jumping to conclusions," Edkins wrote. She offered "love and support" to the Pistorius family and wrote: "I have dated Oscar on and off for 5 YEARS, NOT ONCE has he EVER lifted a finger to me or made me fear for my life."

Prosecutors said Friday that they would argue the history-making Olympic athlete — the first amputee to run at the games — had planned Steenkamp's killing. It sent South Africans reeling further as their national hero, and a global role model in overcoming adversity, was set to face accusations that he intentionally gunned down his girlfriend.

Pistorius stood with his face in his hands as he broke down in tears on his first appearance at the Pretoria Magistrates' Court. Chief Magistrate Desmond Nasir delayed Pistorius' bail hearing until next Tuesday and Wednesday and ruled that Pistorius would be held at a police station in Pretoria until then. Police have said they oppose the granting of bail.

A solemn Pistorius entered the court wearing a gray suit and blue tie and initially appeared composed. When he broke down in tears, his brother, Carl, reached out a hand and placed it on his shoulder. Pistorius' father, Henke, was in the court and later reached over to comfort him as well.

More than 100 people packed Friday morning into Courtroom C at the Pretoria Magistrates Court, including dozens of photographers and videographers. Nasir ruled that no recordings of court proceedings would be allowed in the case.

Police said Friday investigators also conducted an autopsy on Steenkamp's body. Lt. Col. Katlego Mogale said the results of the autopsy would not be published.

Pistorius earlier left a police station, his jacket completely covering his head as he got into a police vehicle. He was holding what appeared to be a white handkerchief in one hand. He was led by officers to a police van outside the Boschkop Police Station in eastern Pretoria, where he had been questioned on Thursday and had spent the night in custody.

A policeman was also seen carrying a handgun in a plastic forensic bag outside the Boschkop station. It was believed to be the weapon used to shoot and kill Steenkamp.

Police said the victim was shot four times at Pistorius' villa in a gated community. Officers found a 9 mm pistol inside the home.

Pistorius made history at the London Olympics last year when he became the first double-amputee track athlete to compete at any games. He didn't win a medal but did make the semifinals of the 400 meters and the final of the 4X400 relay, propelling the world's best-known Paralympian to the level of an international track star and one of the world's best-known sportsmen.

But police hinted at a troubled lifestyle away from public scrutiny for the runner Thursday when they said there had previously been domestic incidents at Pistorius' home.