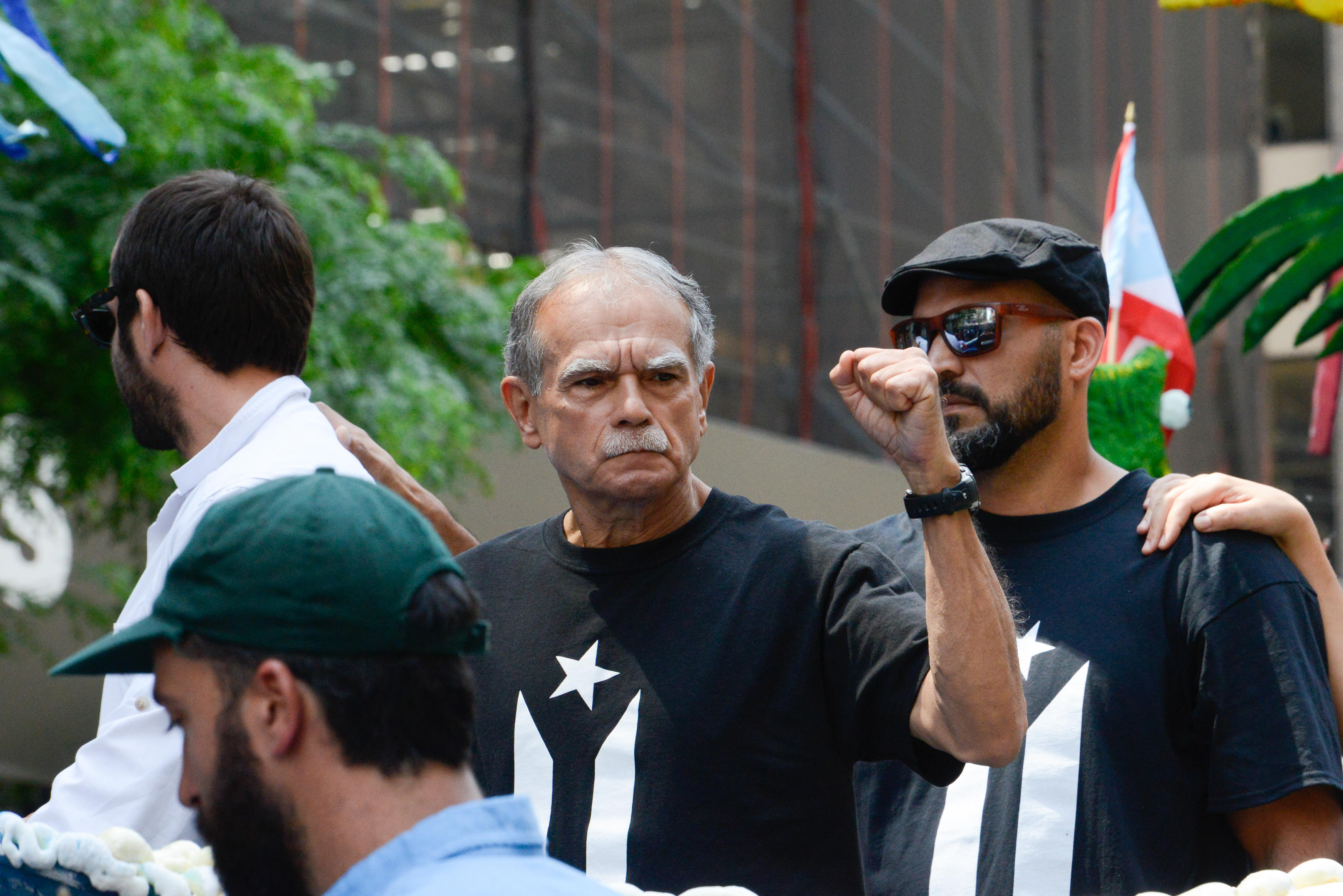 NEW YORK -- Oscar Lopez Rivera may not have officially been honored as a National Freedom Hero in the city's Puerto Rican Day Parade on Sunday, but the fervent nationalist who spent decades in prison for his involvement with a group responsible for a string of bombings in the 1970s and 1980s still got to ride on a float.

Lopez Rivera was cheered and booed as he stood proudly clutching a Puerto Rican flag when the parade stepped off in Manhattan. His supporters followed, carrying signs that read, "Oscar Lopez Rivera is our Mandela."

Nanchelle Rivera, who's no relation, was not among them. From the sidelines, she said she refuses to back the man who served 35 years in prison for his involvement with a group responsible for bombings that killed and maimed dozens of people.

"He did not represent me," said Rivera, visiting from Orlando, Florida. She said she would not have gone to watch the celebration if she'd known Lopez Rivera would be there.

A supporter in the parade heard her booing and shouted back, "This is your history!"

For at least the first hour, the march allayed fears that it might turn violent, given the fervent discussions that for weeks preceded the activist's planned appearance.

City Council Speaker Melissa Mark-Viverito blamed  journalists for turning the debate into a big deal. "This is a day of unity, a celebration, not a controversy being made up by the press," she told CBS New York.

As for those who chose to stay away because of Lopez Rivera, she said "that's their decision."

People and corporations, including AT&T and JetBlue, withdrew from the parade in protest of the decision to honor the 74-year-old former member of the militant Puerto Rican nationalist group Armed Forces of National Liberation, or FALN.

Gov. Andrew Cuomo, a Democrat, and several police and fire department groups also said they would not attend.

Still, many cheered as Rivera waved to the crowd while riding on a float. A man named Fred told CBS New York that he still considers Rivera a hero. "He struggled to decolonize Puerto Rico, one of the last colonies in the world," he said.

Lopez Rivera said last week he would not accept the title of National Freedom Hero organizers first granted him but would instead join the parade as a regular citizen, partly because the focus was too much on him and not enough on the plight of Puerto Rico. The parade's board of directors said in a statement that Lopez Rivera would join the parade "not as an honoree but as a humble Puerto Rican and grandfather."

Most of the tens of thousands of revelers turned out simply to celebrate Puerto Rico, happily salsa dancing and waving Puerto Rican flags. Some wrapped their bodies in it, others adorned their heads with the red, white and blue colors.

Rosa Rosario, a New York resident, said she didn't care that Lopez Rivera was there.

"I don't support a political movement," she said, explaining that she was at the parade to support "my hometown, Hormigueros," a municipality in the western region of the island.

The parade has often been a venue to showcase the complicated history of the U.S. territory, now mired in a recession. This year, it came on the day Puerto Ricans were voting among three choices: independence, statehood or their current territorial status.

Decades ago, FALN claimed responsibility for more than 100 bombings in the U.S. and Puerto Rico, including a lunchtime blast in 1975 that killed four people at New York's historic Fraunces Tavern.

Lopez Rivera was convicted of seditious conspiracy though he was never charged with any specific bombings and has denied participating in attacks that injured anyone. He was released last month following the commutation of his sentence by President Barack Obama, a Democrat.

Mayor Bill de Blasio, a Democrat who for weeks defended his own decision to march, said last week that he was uncomfortable with the idea of honoring Lopez Rivera all along. He showed up for the march, making no comments but shaking hands with people across police barricades.

New York held its first Puerto Rican parade in 1958, when it was barely legal to display the Puerto Rican flag on the island and Puerto Ricans on the mainland faced harsh discrimination.

Congress will have to approve the outcome of Sunday's referendum. Some Puerto Ricans blame the recession on the U.S. government, partly because of the elimination of tax credits that many say led to the collapse of the island's manufacturing sector.