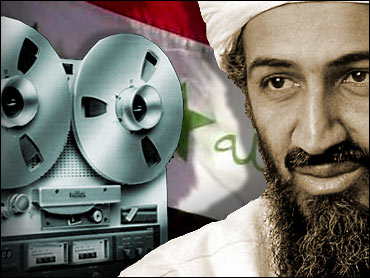 European countries Thursday quickly ruled out any sort of negotiation with al Qaeda after a tape apparently containing the voice of Osama bin Laden offered a truce to governments that withdrew troops from Islamic countries.

The CIA said a technical analysis indicates that the tape probably is authentic.

The official, speaking on condition of anonymity, said the tape was probably recorded in the past several weeks because of its reference to Israel's killing last month of Hamas founder Sheik Ahmed Yassin.

"It's not time to submit to blackmail," said spokesman Richard Boucher describing the State Department's reaction to the taped message, most likely from al Qaeda chief bin Laden.

Boucher says the attempt to drive a wedge among the nations that are standing against terror should "only lead us to strengthen our determination."

He also says the "indiscriminate use of murder" by al Qaeda gives a lie to any claims of political purpose in the taped message.

The tape offers an al Qaeda "truce" to any European nations that withdraw forces from Arab countries within the next 90 days.

The message described the Sept. 11, 2001, attacks on the United States and the March 11 Madrid train bombings as revenge strikes, though it did not directly claim al Qaeda responsibility.

The tape, which aired in full on pan-Arab satellite stations Al-Jazeera and al-Arabiya at more than seven minutes, came at a time when the U.S.-led coalition in Iraq is facing particularly violent resistance.

"I am offering a truce to European countries," the taped message said as the stations showed an old, still picture of bin Laden. "Its core is our commitment to cease operations against any country which does not carry out an onslaught against Muslims or interfere in their affairs."

"The door to a truce is open for three months," but that could be extended, the tape said. "The truce will begin when the last soldier leaves our countries," the speaker said without elaborating.

Experts on militant Islam say the message appears aimed at the European people — hoping they will pressure their governments in the wake of last month's Madrid bombings to stop supporting U.S. military operations in Muslim nations.

And, an analyst said, it appears also to be a message to al Qaeda sympathizers to stop European operations to avoid galvanizing support for Washington's war on terrorism.

"Bin Laden is seeing how those bombings (in Madrid) were used by the Americans to pressure Europe into more action," Montasser el-Zayat, an Egyptian attorney who defends Islamic radicals. "This tape is a message to those groups to cease these actions."

In London, the Foreign Office ruled out any deal with bin Laden, saying al Qaeda's "attacks are against the very idea of coexistence. … The right response is to continue to confront terrorism."

Italian Foreign Minister Franco Frattini said in Rome that "it's unthinkable that we may open a negotiation with bin Laden, everybody understands this."

Spain's incoming foreign minister, Miguel Angel Moratinos, told his nation's parliament that "we don't have to listen to or answer" the tape. A German government spokesman said: "There can be no negotiations with terrorists and serious criminals like Osama bin Laden."

The message said, "What happened on September 11 and March 11 was your goods delivered back to you … Security is a need for all humans and we could not let you have a monopoly on it for yourselves."

"People who are aware would not let their politicians jeopardize their security," it added in a direct appeal to European citizens.

The truce was offered, the speaker said, because polls have shown that "most of the European peoples want reconciliation" with the Islamic world.

"They say that we kill for the sake of killing, but reality shows that they lie," the tape said.

Russians, he said, were only killed after attacking Afghanistan in the 1980s and Chechnya, Europeans after invading Iraq and Afghanistan and the Americans in New York after "supporting the Jews in Palestine and their invasion of the Arabian Peninsula."

Dia'a Rashwan, noting that tape deviated from bin Laden's usual labeling Europeans as "the Crusader-Jewish alliance," said the al Qaeda leader appeared to be focusing on the European people to get them to pressure their governments and "isolate the American administration even from its European allies."

Bin Laden, he said, also may want to show he is still alive so he can try to sink President Bush's re-election bid. The purported bin Laden message denounced the U.S. war on Iraq, saying it was making "billions of dollars" for companies, naming the American firm Halliburton.

The "truce" offer is one of several recent messages believed to have come from al Qaeda figures.

On April 6, a 33-minute audiotape purportedly from al Qaeda-linked terrorist Abu Musab al-Zarqawi appeared on a Web site known for distributing militant Islamic messages. A CIA official said the next day that the recording, which called for Iraq's Sunni Muslims to fight Shiites and claiming responsibility for high-profile attacks there, appeared authentic.

In late March, a tape apparently made by key bin Laden adviser Ayman al-Zawahri denounced Pakistan's president, Pervez Musharraf, an ally of the United States who has called for a crackdown on militant groups and been the target of multiple assassination attempts.

Bin Laden's voice was last believed heard on a tape released in early January, in which the speaker claimed that the U.S.-led war in Iraq was the beginning of the "occupation" of Gulf states for their oil and called on Muslims to keep fighting a holy war in the Middle East. Another recording believed to have been from bin Laden emerged in October.

There have been no firm indications of bin Laden's whereabouts since he eluded American and Afghan troops at the battle for the Tora Bora cave complex in eastern Afghanistan in December 2001.

This weekend, the U.S. military pulled back from an earlier prediction that bin Laden would be captured this year, even while preparing its largest force to date for operations along the Pakistani border where the al Qaeda chief is suspected to be hiding.

The U.S. government has offered $25 million for information leading to bin Laden's capture, and a private group has added a $2 million reward.