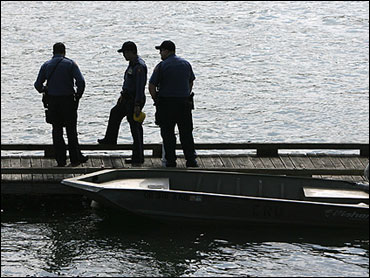 An Oregon mother was arrested Saturday in the drowning of her 4-year-old son after the boy and his 7-year-old sister ended up in the chilly Williamette River.

Residents heard screams on the Sellwood Bridge near Portland and called authorities. Some jumped into boats to help search in the early morning darkness. After about an hour, a couple found the children downstream.

The boy, Eldon Jay Rebhan Smith, could not be revived; the girl was in a hospital and expected to survive.

"She's doing well," said Detective Sgt. Rich Austria of the Portland Police Bureau. "She has the will to live."

Austria said it was not immediately clear whether the children were pushed or fell into the river. They have not yet questioned the girl.

Police said the mother, Amanda Jo Stott-Smith, was taken into the custody at a downtown parking garage several hours after her children were found. Stott-Smith, 31, threatened to jump off the garage's ninth floor in before she was arrested, Austria said.

A police spokesman said he did not know if Stott-Smith had an attorney.

Police were asking the public to call investigators if they saw Stott-Smith's car, a blue Audi sedan, on the bridge when residents of the area heard the children's screams.

"Had they not been awake at one in the morning," Austria said, "we would investigating a case here with no children."

When police arrived, officers also heard screams on the river but couldn't find the children because it was dark, said Officer Greg Pashley, a Portland Police Bureau spokesman.

"As you look down into the darkness it's hard to see anything," Pashley said. "I can't imagine what it must be like to be a child in this cold river."