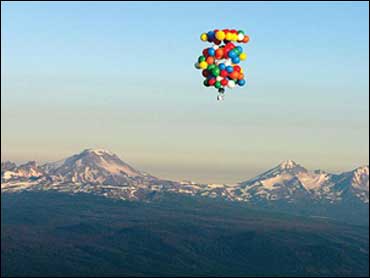 With instruments to measure his altitude and speed, a global positioning system device in his pocket, and about four plastic bags holding five gallons of water each to act as ballast — he could turn a spigot, release water and rise — Couch headed into the Oregon sky.

Nearly nine hours later, the 47-year-old gas station owner came back to earth in a farmer's field near Union, short of Idaho but about 193 miles from home.

"When you're a little kid and you're holding a helium balloon, it has to cross your mind," Couch told the Bend Bulletin.

"When you're laying in the grass on a summer day, and you see the clouds, you wish you could jump on them," he said. "This is as close as you can come to jumping on them. It's just like that."

Couch is the latest American to emulate Larry Walters — who in 1982 rose three miles above Los Angeles in a lawn chair lifted by balloons. Walters had surprised an airline pilot, who radioed the control tower that he had just passed a guy in a lawn chair. Walters paid a $1,500 penalty for violating air traffic rules.

It was Couch's second flight.

In September, he got off the ground for six hours. Like Walters, he used a BB gun to pop the balloons, but he went into a rapid descent and eventually parachuted to safety.

This time, he was better prepared. The balloons had a new configuration, so it was easier to reach up and release a bit of helium instead of simply cutting off a balloon.

He took off at 6:06 a.m. Saturday after kissing his wife, Susan, goodbye and petting his Chihuahua, Isabella. As he made about 25 miles an hour, a three-car caravan filled with friends, family and the dog followed him from below.

Couch said he could hear cattle and children, and he said he even passed through clouds.

"It was beautiful — beautiful," he told KTVZ-TV. He described the flight as mostly peaceful and serene, with occasional turbulence, like a hot-air balloon ride sitting down.

Couch decided to stop when he was down to a gallon of water and just eight pounds of ballast. Concerned about the rugged terrain outside La Grande, including Hells Canyon, he decided it was time to land.

He popped enough balloons to set the craft down, although he suffered rope burns. But after he jumped out, the wind grabbed his chair, with his video recorder, and the remaining balloons and swept them away. He's hoping to get them back some day.

Brandon Wilcox, owner of Professional Air, which charters and maintains planes at the Bend airport, said Thursday that Couch definitely did it. Wilcox said he flew a plane nearby while Couch traveled, and a passenger videotaped the flying lawn chair.

Whether Couch will take a third trip is up to his wife, and Susan Couch said she's thinking about saying no. But she said she was willing to go along with last weekend's trip.

"I know he'd be thinking about it more and more, it would always be on his mind," she said. "This way, at least he's fulfilled his dream."