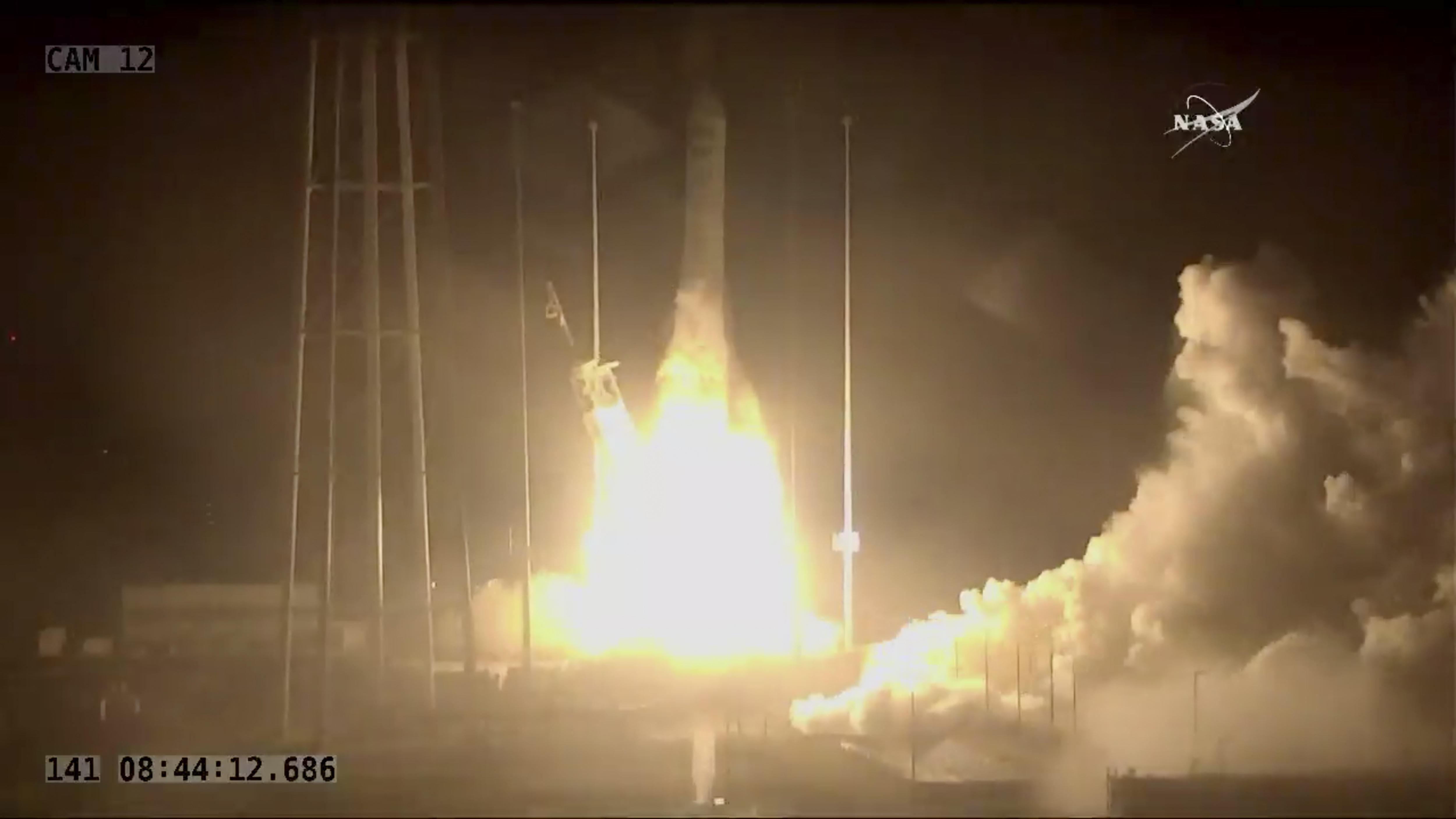 An Orbital ATK Antares rocket thundered to life and shot away from the Virginia coast early Monday, boosting a Cygnus cargo ship into orbit loaded with more than 3 tons of crew supplies, science gear, spare parts and three small satellites bound for the International Space Station.

The experiments on board the Cygnus for the 200th space station launch include equipment to test a novel technique for separating liquids, one devoted to learning more about how concrete sets up in microgravity and a quantum physics study aimed at producing temperatures within a billionth of a degree of absolute zero.

Eric Cornell, principal investigator of the Cold Atom Lab, said the goal is to probe the mysteries of quantum mechanics by cooling and thus slowing atoms down to the point where they enter the same energy state and exhibit wave-like behavior, acting as a single super atom known as a Bose-Einstein condensate.

On Earth, the effects of gravity limit the size and lifetimes of such friction-free zero-viscosity superfluids, but in space, the condensates should be larger and last longer, giving scientists more time to study the underlying physics. The experiment is a first for NASA.

Cornell, who shared the 2001 Nobel Prize in physics for his work with Bose-Einstein condensates, said the Cold Atom Lab aboard the space station will produce much colder temperatures than are possible on Earth, some 100 million times lower than temperatures in the depths of space.

"Getting extraordinarily cold has the effect of magnifying quantum mechanics, up to the effect where you can see it, so you can actually see what amounts to waves of quantum matter a millimeter or two millimeters across," he said.

Along with learning more about the physics of super-cold Bose-Einstein condensates, Kamal Oudrhiri a senior manager at the Jet Propulsion Laboratory, said the CAL research "also will give us a better understanding (of) gravity."

Delayed one day because of weather and last-minute inspections, the Antares mission began with liftoff from pad 0A at the Mid-Atlantic Regional Spaceport - MARS - at NASA's Wallops Island facility at 4:44 a.m. EDT (GMT-4). Launch was delayed five minutes due to cloudy weather, but conditions improved enough to proceed.

Powered by two Russian-built RD-181 engines, the rocket's first stage boosted the vehicle out of the thick lower atmosphere before giving way to a solid-propellant Castor 30XL second stage motor that put the Cygnus into its intended preliminary orbit nine minutes after liftoff. The cargo ship's two circular solar arrays were expected to unfold about 90 minutes after takeoff.

If all goes well, the Cygnus will execute an autonomous rendezvous with the space station, catching up with the lab complex early Thursday. The station's robot arm then will be used to capture the spacecraft and pull it in for berthing at the central Unity module's Earth-facing port.

As they unload the cargo ship, the station crew will re-pack it with trash and no-longer-needed equipment before releasing it from the station in mid July. Six shoebox-size "cubesat" satellites will be deployed before the spacecraft plunges back into the atmosphere and burns up.

"We're really excited about the Orbital ATK 9 launch," said Kirt Costello, space station program scientist. "The Cygnus is bringing with it over 3,000 kilograms of cargo to the International Space Station. Over 1,000 of those kilograms are on board to support the 50 science and technology demonstration experiments that we have and two new (research) facilities we're flying to the ISS."

The science cargo includes three small satellites that will be launched from the space station to test miniaturized components useful for Earth observation along with a wide variety of research that will be carried out by the station's crew.

In another first for NASA, one of those experiments is designed to shed light on how concrete sets up in the absence of gravity.

"A lot of time when I'm asked what's the research that I do, and I just say simply concrete, people give me a blank look and say they don't give a Ph.D. for concrete research. Well yes, they do!" said Aleksandra Radlinska, principal investigator for the Microgravity Investigation of Cement Solidification, or MICS, at Pennsylvania State University.

"Because we are looking into colonizing space, we want to go to the moon and deep space beyond and we will need shelters for the human mission, we will need to protect equipment from the radiation effects and impacts they could experience, we need to find a way to produce these shelters and produce a safe environment for humans or instruments."

Despite decades of research, she said, "we still don't understand the process completely."

"For every person sitting in this room, there's one ton of concrete being produced and consumed every year," she said during a briefing Saturday. "And every ton of concrete is responsible for emission of approximately .8 tons of carbon dioxide into the atmosphere. We really need to understand much better what is happening with this material."

Monday's launch marked the 200th flight to the space station since assembly began in 1998, the third flight of an upgraded Antares 230 rocket and Orbital ATK's ninth launch of a Cygnus cargo ship under an 11-flight contract with NASA that is expected to total $2.89 billion, or $262.6 million per flight, according to NASA's inspector general.

The company also holds a follow-on contract for at least six space station resupply missions at an as-yet-unspecified cost.

Both companies have suffered a resupply launch failure with SpaceX losing a Falcon 9 rocket and Dragon cargo ship in June 2015, eight months after an Antares failure seconds after liftoff in October 2014. In the wake of the Antares failure, Orbital ATK redesigned the booster and added more reliable first-stage engines.