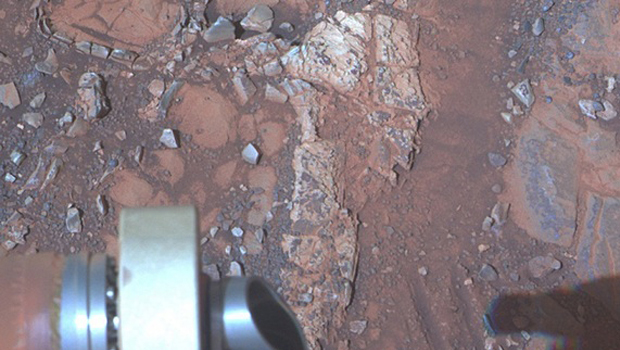 NASA's Mars rover Opportunity has made perhaps the biggest discovery of its nearly 10-year career, finding evidence that life may have been able to get a foothold on the Red Planet long ago.

The Opportunity rover spotted clay minerals in an ancient rock on the rim of Mars' Endeavour Crater, suggesting that benign, neutral-pH water once flowed through the area, scientists said.

"This is water you could drink," Opportunity principal investigator Steve Squyres of Cornell University told reporters last week, explaining why the rock, dubbed "Esperance," stands out from other water-soaked stones the rover has studied. [Ancient Mars Could Have Supported Life (Photos)]

"This is water that was probably much more favorable in its chemistry, in its pH, in its level of acidity, for things like prebiotic chemistry -- the kind of chemistry that could lead to the origin of life," Squyres added.

The golf cart-size Opportunity and its twin, Spirit, landed on the Red Planet in January 2004 on three-month missions to search for signs of past water activity. The robotic explorers found plenty of such evidence (much of it indicating extremely acidic water, however), then just kept rolling along.

Spirit stopped communicating with Earth in 2010 and was declared dead a year later, but Opportunity is still going strong. In August 2011, the six-wheeled robot arrived at the rim of the 14-mile-wide Endeavour Crater, which it has been investigating ever since.

Opportunity has seen signs of clays in Endeavour rocks before, but in nowhere near the concentrations observed in Esperance, researchers said. Overall, Esperance provides strong evidence that ancient Mars was habitable.

"The fundamental conditions that we believe to be necessary for life were met here," Squyres said.

The neutral-pH water that generated the clays probably flowed through the region during the first billion years of Martian history, he added, stressing that it's nearly impossible to pin down the absolute ages of Red Planet rocks without bringing them back to Earth.

Opportunity's latest discovery fits well with one made recently on the other side of the planet by the rover's bigger, younger cousin Curiosity, which found strong evidence that its landing site could have supported microbial life in the ancient past.

Such observations could help scientists map out Mars' transition from a relatively warm and wet world long ago to the cold and dry planet we know today.

"All the details need to be worked out, but the more we look, the more it fits into this kind of broad context," said Opportunity deputy principal investigator Ray Arvidson of Washington University in St. Louis.

Opportunity had spent the last 20 months at a spot called Cape York, but it has now begun to trek toward Solander Point, which rises 180 feet (55 meters) from the surrounding Martian plains.

The mission team is intrigued by the many layers of geological material Opportunity can investigate at Solander Point. The area also has a north-facing slope, which will allow Opportunity to point its electricity-generating solar panels toward the sun during the coming southern-hemisphere Martian winter.

The height of this winter will occur in February 2014, but Opportunity's handlers want to get the robot to Solander by the beginning of August, so it can investigate the region and help plan out a winter science campaign, researchers said.

There's no reason to think Opportunity won't complete the 1.4-mile trek (2.2 km) to Solander, or that it won't survive its sixth Martian winter; the rover remains in good health despite its advanced age, mission officials said.

Still, the Opportunity team is taking nothing for granted.

"The rover could have a catastrophic failure at any moment," said Opportunity project manager John Callas, of NASA's Jet Propulsion Laboratory in Pasadena, Calif. "So each day is a gift."

Opportunity is poised to break the international record for distance traveled on another world during the drive to Solander Point. That mark is held by the Soviet Union's remote-controlled Lunokhod 2 rover, which traveled 23 miles (37 km) on the moon in 1973.

However, Opportunity scientists said today that Lunokhod 2's total mileage is just an estimate, so it's tough to know what the actual record is. They plan to hold off on any announcements until someone can calculate a precise odometer reading for Lunokhod 2, possibly by using measurements by moon-orbiting spacecraft.

FBI Director Christopher Wray testified Tuesday at a Senate hearing on the ongoing investigation into the assault on the U.S. Capitol. "January 6th was not an isolated event," he said. "The problem of domestic terrorism has been metastasizing across the country for a long time now and it's not going away any time soon." Watch his opening statement.

Doctor: Everyone should get the COVID vaccine

The first shipments of the new Johnson & Johnson single-dose vaccine are arriving in some states today as vaccination efforts ramp up nationwide. Dr. Dyan Hes joined CBSN to discuss why everyone should get the shot as soon as they're able to.