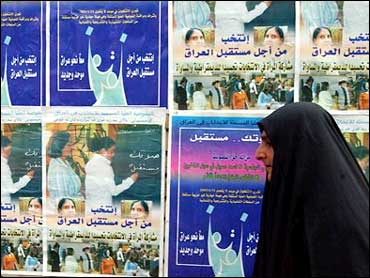 
Tuesday's attack on a U.S. military mess hall tent in Mosul was devastating: 22 dead, including 14 GIs, and 69 people wounded.

The ability of insurgents in Iraq to carry out what is now thought to be a suicide bombing illustrates one of two realities now apparent in Iraq: the security situation is deteriorating badly.

Dan Serwer - director of Iraq programs for the United States Institute of Peace, an independent think tank funded by Congress - has seen it with his own eyes.

Just back from his third trip to Iraq this year, Serwer says when he was there last March, the security situation dictated his not leaving the capital city's reasonably secure Green Zone where USIP was conducting training sessions for Iraqis interested in promoting civil society, resolving inter-ethnic conflict and democratic governance.

Nine months later, says Serwer, USIP's training sessions last week had to be held in Sulaymaniyah, in Kurdish-dominated northern Iraq, because Baghdad - even within the Green Zone - was not deemed safe enough. The attack in Mosul, also in the north, only underscores the reality of a worsening security situation.

At the same time, however, Serwer and his colleagues from USIP - A. Heather Coyne and Dr. Phebe Marr - stress another reality: there are plenty of Iraqis still making the effort to form a new government based on democratic principles and they are working to carry through with national elections scheduled for January 30, notwithstanding the ongoing violence and threats to them and their families.

Iraqis of various ethnic, tribal and religious persuasions - about 50 in two different USIP workshops - braved the threats and intimidating tactics from insurgents on the one hand and roadblocks and other hurdles imposed by coalition forces on the other hand to attend the workshops on conflict management and training Iraqi facilitators to train other Iraqis to solve their problems in what are for them non-traditional ways, to say the least.

One example cited was of a university professor who, despite already having ten bodyguards to protect him from the threats of insurgents for his political activities, decided it was worth attracting added scrutiny to attend the USIP workshop.

Coyne, a former civil affairs officer in the military who worked for the Coalition Provisional Authority and who now heads the USIP office in Baghdad, understands the persistence of Iraqis who participate in such programs. "Their message," says Coyne, "is this is the most hopeful period in their history and they don't want to blow it."

Marr, author of a history of Iraq, returned with concerns about possible splits within Iraq's religious and ethnic groups that could lead to the "Lebanonization" of the country. While not assuming the post-election period will lead to civil war, she does not rule out that possibility.

For the moment, Marr sees an enthusiasm for politics among certain groups, especially the Kurds, and a possibility that regional political identities could develop, for economic self-interest among other scenarios.

The USIP team is keenly aware of threats by insurgents against those who participate in USIP programs. But Serwer notes "there are lots and lots of Iraqis who do not come into contact with Americans. There are a lot of other things going on which will determine the outcome that don't have to do with the fight between American forces and the insurgents." Fully expected is an attempt by insurgents to intimidate Iraqis who plan to go to the polls.

The core of USIP's approach is based on the belief that it will take Iraqis to convince other Iraqis that the western, democratic approach to political development and problem solving is viable in Iraq.

Serwer's strategy for USIP assumes there are plenty of Iraqis who want no part of dealing with Americans. "I think it's too much to think those people (insurgents, former Baathists) would come into a tent that the Americans have put up," says Serwer.

"It's a matter of overlapping circles," says Coyne, "that our circle reaches out to the very people on the edge, and their circle includes a completely different group that we couldn't reach directly."

The question which has no clear answer at the moment is which of these two realities - one of worsening violence, carried out by a small number of dedicated insurgents (most of whom are Iraqis), and the other a growing willingness on the part of another small number of Iraqis to buy into a new political system pushed on them by outsiders - will prevail in the long run.

More precisely, for the short term, the question is what happens on Iraq's election day if both realities maintain their current momentum.