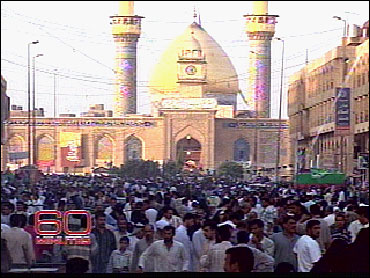 When the U.S. invasion came last spring with promises of democracy and self-rule, people in Karbala were among the first to try and take charge of their own affairs.

Religious and community leaders got together and selected a city council to represent them, and a security force to protect them. They had assumed that their experiment in democracy would be applauded by the American military.

It was not. U.S. troops disarmed the protection force, arrested popular city councilmen and put back into power some of the same people who had served Saddam.

It has left people here angry and frustrated, including Dr. Hussein Shahristani, one of the most respected exiles to return after the war.

The last time 60 Minutes spoke with him was in London just before the war. He was one of Iraq's leading dissidents, a top nuclear scientist who had refused to help Saddam to build a nuclear bomb. At that time, he told Correspondent Steve Kroft about his 11 years in solitary confinement and torture at the hands of Saddam's henchmen.

"They used high voltage probes on the sensitive part of the body," says Shahristani, who recalled seeing and hearing other people being tortured as well. "The worst part of it was hearing these young children screaming."

Shahristani escaped in 1991 and devoted a decade to helping Iraqi refugees. And when U.S. forces rolled into southern Iraq, he followed, setting up an aid organization in Karbala, distributing everything from shoes to wheelbarrows, and supplying milk and eggs to 7,000 families.

When Shahristani talked to 60 Minutes in London earlier this year, he said his main concern was that the U.S. would rush into a war without "doing its homework properly."

"They have conducted the war itself very well," he says. "But they were not prepared for what the Iraqi people expected of them after the war."

What they expected, Shahristani says, is just what the U.S. had promised -- self-rule and swift justice for members of Saddam's Ba'ath Party, who had enslaved them for more than 20 years.

"The expectations were that the Baathists would be immediately arrested and put on trial for their crimes against humanity, for their crimes against the Iraqi people. Now this hasn't happened. And people were alarmed when the Ba'athists were actually reinstated back into government," says Shahristani, citing that a lot of ex-Baathists still hold positions in the police department.

When the U.S. Marines pulled into town, their American commander decided to install as police chief Gen. Abbas Fathil Abud, a high-ranking member of the Baath Party, who had served Saddam for 24 years.

When 60 Minutes arrived at his office, he was closeted with U.S. military officers and protected by American troops.

"There is a lot of cooperation between us and the American military police," says Gen. Abud.

Even though Ambassador Paul Bremer is on record saying that no high-ranking members of Saddam's old Baath Party will hold power in Iraq, in Karbala, the U.S. government is cooperating with Gen. Abud and has put him in charge of a well-armed force – even though he is a Baathist.

"The decision is Mr. Bremer's. He's the decision maker and he can make an exception," says Abud.

Neither Ambassador Bremer nor the Marines would discuss any aspect of their role in Karbala.

One of the arguments the U.S. government has made is that they need trained people to help them restore order in the country. And the trained people are those who are former Baath Party members.

"Some of these people, what they are really actually doing are recruiting the newly organized Baathist apparatus back into the force," says Shahristani, who adds that the people are extremely concerned about this. "People feel vulnerable."

They feel vulnerable because some of the same people who jailed, tortured and informed on them are once again in a position of authority: carrying weapons, communications equipment and driving official vehicles.

One of the reasons Karbala has been relatively peaceful since the invasion is that Shi'ite religious figures have ordered people to be calm and cooperate with U.S. authorities.

"They all have to be taken out of management. We don't need them. The Americans issued exemptions to some Baathists. This is not right," says Abdul Mehdi.

Is it possible that the Americans just were ignorant when they first came in? That they didn't know who to talk to?

"They might not have known at the beginning. But later on the picture became clearer," says Abdul Mehdi.

"The Baath Party is reorganizing itself. They are getting financial support from Saddam's inner circles who are still loose, and they are holding meetings to organize their activities," adds Shahristani.

Not only have the Americans installed Saddam loyalists in the police department, they have tried to arrest two people selected by Karbala's leaders to serve on the city council.

Akram al Zubaidi was appointed to be the city's spokesman and he had spent 11 years in Saddam's prisons. Yet when he complained to the Americans about the new police chief and the way they were trying to run the city, U.S. forces tried to arrest him. He managed to escape.

He's now a fugitive on the run. He says that more than 15 American soldiers raided his house in the middle of the night. He also says that his crime was doing the job the leaders of Karbala had asked him to do.

"My crime is that I was 100 percent honest," says al Zubaidi, who claims this made him a troublemaker. "That's the way they saw me. I was telling them everything. And I was very honest with them and I thought that was democracy. And then, I realized democracy is only allowed in your country and not in ours."

"The U.S. officers in charge of the city have never explained to the people why they've arrested these people," says Shahristani. "They only told the city council that they have good reasons for these arrests, which they are not going to share with them."

Najeeb al Shami was the city councilor in charge of security in Karbala before the Marines took over and installed a Saddam loyalist in his place. Al Shami, who has a heart condition, was arrested by the Americans as an enemy prisoner of war, and cleared after it was determined that there was no evidence that he had committed belligerent acts against coalition forces.

His son, Ahmed, says al Shami was rearrested a few days later and taken to Abu Ghrieb Prison. When Ahmed went to the prison with a lawyer, he says they were turned away: "It is forbidden for any lawyers, humanitarian organizations, or any member of his family to visit him."

What is he charged with?

60 Minutes went off to Abu Ghreib with Shahristani to see if we could get some information. Shahristani had once spent nearly 4,000 days in solitary confinement under Saddam in Abu Ghrieb. As it turns out, he was lucky. The cells just outside the execution chamber still bear the names of those who got the gallows.

"Most people just left their names. This guy is Jawad al-Abadi. It's a big family. And this guy is Jawadi Malek," says Shahristani. "Everybody was executed."

Gen. Karpinski assured 60 Minutes that Abu Ghreib is a much different place now than it was when Saddam was running it. Prisoners were well fed and taken care of. Most of them, she said, were common criminals, and that everyone here was allowed visits with their families and lawyers. A few, she said, were being held for "crimes against the coalition," but no one was being held without charges.

When asked about al Shami, who was originally classified as an enemy prisoner of war, Karpinski said she didn't recognize the name. "We have several thousand prisoners here," she says.

She also said that it was unlikely that his family and lawyers have not been able to get information about al Shami or visit him in Abu Ghreib.

Is it possible to find out whether he is here?

"We can, with this information, we can find out what the circumstances are, sure," says Karpinski.

But are there people here who are being held without charges? "No. We have prisoners in all of our facilities who, I mean there's nobody being held for no reason," says Karpinski. "There's foundation or, or charges for all of our prisoners."

60 Minutes followed Gen. Karpinski to the computer room and waited. She had told us that all prisoners were charged after an initial 72-hour processing period. But Najeeb al Shami had been in Abu Ghreib for more than a month.

Finally, she was able to find him.

60 Minutes was then asked to turn off the camera. Gen. Karpinski told us that al Shami was "suspected of crimes against the coalition," and had not yet been charged, and would not necessarily be allowed access to his family and lawyers.

Later that day, we received written answers from U.S. Central Command to our requests to find out what happened to the city councilor. On the question of family visits, it said: "To date we have not allowed our civilian security internees to receive visitors." And added, "We do not discuss their cases publicly."

Two months after al Shami was jailed at Abu Ghreib, there are still no charges against him.

Gen. Karpinski said al Shami had been turned in by another Iraqi. We asked the Karbala police chief, Gen. Abbas, a 24-year veteran of Saddam's forces, if he had turned in the city councilor.

In Karbala, hopes for war crimes trials and representative democracy are fading, and it is not clear whether Iraqis will ever be able to vote in an American-style election.

If U.S. forces impose a government rather than allowing Iraqis to elect one, Dr. Shahristani says he fears the worst: "If that process doesn't happen, God only knows what will be the consequences of such a move."