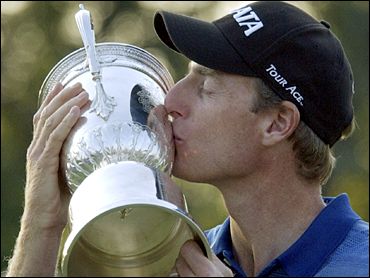 When Jim Furyk walked off the 18th green as the U.S. Open champion, the most important people in his life were there to share his finest moment as a golfer.

He was greeted by his wife, infant daughter, mom and — most fittingly — by his dad, the only coach he's ever had.

What better way to say "Happy Father's Day" than to use what he was taught, take one of the game's most unorthodox swings and parlay it into his first major championship.

"It's hard to try to rate where everything sits or falls, but this is the most special day," Furyk said. "This means the most to me right now."

In the oddest moment of the final round, CBS News Correspondent Steve Futterman reports, a topless woman slipped under the gallery ropes and approached Furyk on the 11th hole.

"My back was turned and I heard a fan yell out, 'You've got to be kidding me,'" Furyk said. "She was four feet away with a flower of some sort. … It was a total shock."

The woman was escorted away by security guards and the incident didn't deter Furyk.

Furyk shot a 2-over 72 on Sunday at Olympia Fields for an 8-under 272 total and three-stroke victory over Australia's Stephen Leaney. The winner matched Tiger Woods, Jack Nicklaus and Lee Janzen for the lowest 72-hole score in the 103 years of the U.S. Open.

Woods shot 12-under 272 three years ago at Pebble Beach, which played as a par 71, and remains the only player to finish a U.S. Open in double digits under par.

Leading by three strokes going into the final round, Furyk said he woke up Sunday morning knowing he would win. Even tougher than settling his nerves was composing himself to tell his Mike Furyk: "Happy Father's Day."

"I had a difficult time even speaking to him," Furyk said. "He's always been there for me in all parts of life. I just told him, 'I know you'll be out there with me today. Let's go get 'em."

And Furyk did, playing the same solid golf that had helped get to 10 under through three rounds. Nothing distracted him, not even a woman who bared her breasts on the 11th hole.

As he got ready to walk to the 18th green, the significance of his accomplishment and all the work he'd put in started to sink in while an ovation built.

"I lost it at the point emotionally," he said. "I knew I could pretty much do anything on that green and still win the tournament. I just wanted to get it over with and win."

He ended with a bogey but it didn't matter. He was too far ahead to be caught. And the label as one of the best players to never win a major had disappeared.

"I was never consumed by it," he said. "I said Saturday night that if I played my entire career and never won a major championship, I could live with that. And I meant it."

Leaney, three shots back after three rounds, fell five strokes behind at the turn and couldn't catch up. He closed with a 72, but his runner-up finish assures him a PGA Tour card for next year.

The only other players under par Sunday when a warm day finally firmed up the greens were Masters champion Mike Weir (71) and Kenny Perry (67).

Defending champion Woods finished off a disappointing week with another disappointing round, a 72 that left him well back in the pack at 3-over 283.

For the first time since 1999, Woods does not hold any of the four major championship titles.

"It's not like I'm playing and can't hit a shot," Woods said. "I'm hitting good shots and it's a matter of making some putts."

When Leaney holed a 25-foot birdie putt on the 13th to get to 6 under, he said he thought he could still win. Furyk had bogeyed the hole, leaving him only three strokes ahead with five holes to play.

"I really believed that I was actually going to win," Leaney said. "I thought I could bring it back, but it just wasn't to be. ... He didn't make enough mistakes that really gave me a chance."

When Leaney bogeyed the 17th, he finally accepted that this title wasn't meant to be his in his first shot at a major title.

"I've had a wonderful week," he said. "I got my U.S. tour card for the next two years, which is what I wanted. So I guess there are good things to come out of it."

But Furyk's week has been great, too. Sensational, in fact.

His first-place check was for $1.08 million, the largest of his 10-year PGA Tour career. And his name will always be mentioned with other winners of major championships.

"I'll sit down 40 years from now and think back. It will definitely be the best part of my career," Furyk said.