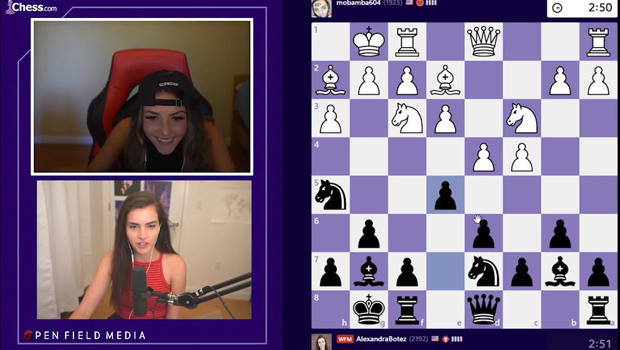 The pandemic has reduced most professional sports to shadows of their former selves. But it's done wonders for one game, maybe the last one you'd ever guess: chess.

"A boom is taking place in chess like we have never seen maybe since the Bobby Fischer days," said chess grandmaster Maurice Ashley. "And it's happening all because the pandemic has driven people indoors, and they're looking for something incredible, constructive, educational to do.

"People have this misconception that it's slow, it takes a long time, it's boring. Why would you want to watch grass grow? Yeah, but chess is not like that. Well, it's not all the time like that anyway!" Ashley laughed.

It's definitely not like that in New York City's Washington Square Park, where you can play a pick-up game for five bucks with old-timers like David Solomon Reed. He's been playing here for 40 years. "When you guys go back and do the editing, I want the heading to be, 'I am the last lion of Washington Square Park – the last,'" Reed told "CBS Sunday Morning."

If there's a boom in chess, they're not seeing it here. Players just aren't getting the same traffic they once did. And nowadays, the chess pieces here are sprayed with hand sanitizer.

Before the pandemic, Reed said, he'd make $400-$500 a day: "Now it's, like, slow, because a lotta tourists are not allowed to come here as far as the flights coming in and out."

Correspondent David Pogue asked, "So, now it's down to what, on a good day?"

So, where's the boom? You probably saw this coming – it's online. By June 2020, the number of people joining chess.com had tripled from the previous year. The signups grew by a million people a month.

"I couldn't really see my friends as much, so I was kind of looking for that competitive vice to continue in my life, and I found that through chess," said grad student Richard Hamilton. He's one of chess.com's new members.

"The idea is you're playing total strangers?" asked Pogue.

"Yeah, you're playing with – it's kind of cool – sometimes it's like Iran or Albania, some countries that the average American maybe can't even point out on a map!" Hamilton said.

But the chess explosion isn't just from people playing; it's also people watching. "Chess has been around for over a thousand years, and people are just starting to watch at explosive rates now," said Alexandra Botez. As a teenager, she won six national titles, in both Canada and the U.S. Today, at 25, Botez makes a six-figure income playing chess live on Twitch, a website where you watch entertaining gamers play video games.

But in the pandemic, chess is one of Twitch's fastest-growing spectator sports.

Botez said, "It's very high-energy. You're yelling when you lose a piece, you're excited when you win. Sometimes, people will put bets on the line, and it's much more interactive, and you feel like you're actually watching a kind of sport."

At one point Botez actually threatened to shave her eyebrows: "Yeah, you know, I said that if I don't reach a certain rating goal in a in one-month period, I would shave off my eyebrows. It was very motivating!"

She got to keep her eyebrows.

And along the way, she's amassed a huge following of fans. About 200,000 people a day log on to watch her play chess, and a lot of them pay $5 a month to support her channel.

Becoming an online chess star requires more than good chess chops. You have to multitask like crazy. You trash-talk, you joke, for six to eight hours at a time.

On one hand, Maurice Ashley can't wait for the return of chess tournaments played in person. "Chess players want to sit across the board," he said. "They want to see the player they're playing. They want to shake hands. They want to go after the game and hang out and talk about what fun that was, maybe go over the game where they made mistakes and then maybe go have a brewski."

But overall, he's thrilled to see how the internet has brought this ancient game to millions of new fans.

Pogue asked, "So, this is not a pandemic bubble that's gonna pop?"

"Oh no, no," Ashley replied. "Pandemic bubble for chess? Not at all! This is a pandemic rocket ship that has taken the game to new levels!"

Trans leader drives LGBTQ services and acceptance in the Bronx

Behind the scenes with Trevor Noah
More
Thanks for reading CBS NEWS.
Create your free account or log in
for more features.
View CBS News In
CBS News App Open
Chrome Safari Continue
Be the first to know
Get browser notifications for breaking news, live events, and exclusive reporting.