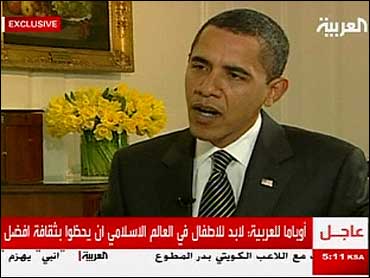 You have to hand it President Obama, He's not letting much time go by before launching on any number of initiatives.

Even as former Senator George Mitchell, his special envoy to the Middle East was winging his way toward Egypt, Obama was giving an interview to Al Aribya - claiming his administration was going to be different.

He said we will do a lot of listening. Today marked one week in office for Obama, and from granting states greater latitude on emission standards to closing Guantanamo, this president has made it clear that the "urgency of now" he talked about on the campaign trail carries over to his administration as well.

The president will spend part of the day today talking to Republicans in the House and Senate, just Republicans mind you, in an effort to hear their concerns about the stimulus package.

No one in Washington is accustomed to this manner of doing business. And the Republicans will soon be faced with a choice, hang on, or be left behind.
By Harry Smith