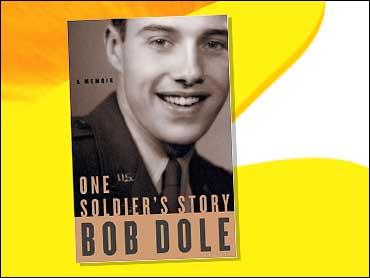 On April 14, 1945, 60 years ago this week, a young man from a small Kansas town was changed forever when he was wounded by enemy fire in northern Italy during one of the final battles of World War II.

Like so many of his fellow soldiers, he worked to overcome his life-threatening injuries and learned to live with his disabilities.

The survival skills Bob Dole learned during those dark days helped shape the man and political leader he would eventually become.

The former senator recounts his personal story in the new book "One Soldier's Story."

He tells The Early Show co-anchor Hannah Storm he wonders what he would have done with his life if he hadn't been injured.

"I think there is strength to adversity," he says. "I think people are stronger. You're more determined in nearly every case. You set goals that you can reach. Not impossible goals, and I decided, if I couldn't use my hands, I'd use my head."

The book, he says, is really for people who feel that maybe their life can't go on because of circumstances beyond their control.

"It's totally no politics in it," he says. "It's about the will to recover and recovering, and it's also about people who think, Well, at age 50, I can't do anything anymore."

And notes he hopes it might be an example that you can still work in your 60s, 70s and 80s.

The former senator recently suffered a health setback. This winter, he spent more than a month in the hospital.

Asked how he is feeling now, he says, "I feel a lot better. I took a nasty fall on Jan. 11 and it's been a long time in the hospital. I couldn't use this arm (left). I don't use the right arm. But it was almost like it was all happening over again, like 60 years ago when I couldn't feed myself, couldn't go to the bathroom, all these things. But I'm much better and much stronger and when you get a little older, which you wouldn't understand, it takes longer to recover."

His parents, in particular his mother, whom he calls "a star," were the force behind his recovery, as a 20-year-old, enabling him to go forward with his life.

He writes, "I would lie in bed staring in the darkness asking myself again and again, 'Why? Why me? Why was I on that hill at 1913? What did I ever do to deserve this? Why wasn't somebody up there looking out for me?' In my better moments, I realized somebody was."

He also credits his doctor who tried to restore the use of his right arm and shoulder. Dole had several surgeries, which the doctor did for free.

And what Dole did with it was to go on to this incredible political career.

Interestingly, he is not the only vet who ended up in higher office. While Dole was in the military hospital in Battle Creek, Mich., he became friends with Daniel Inouye who had lost an arm in the war, and is now a U.S. Senator, and Phil Hart, also injured in the war, who also became a U.S. Senator from Michigan (and died in the '70s). Along with them, Sen. John McCain (R-Ariz.), and former Sen. Max Cleland (D-Ga.), both of whom were injured in Vietnam, also had to struggle to overcome their injuries and used the leadership they learned in the military to succeed in politics.

Click here to read an excerpt from "One Soldier's Story."