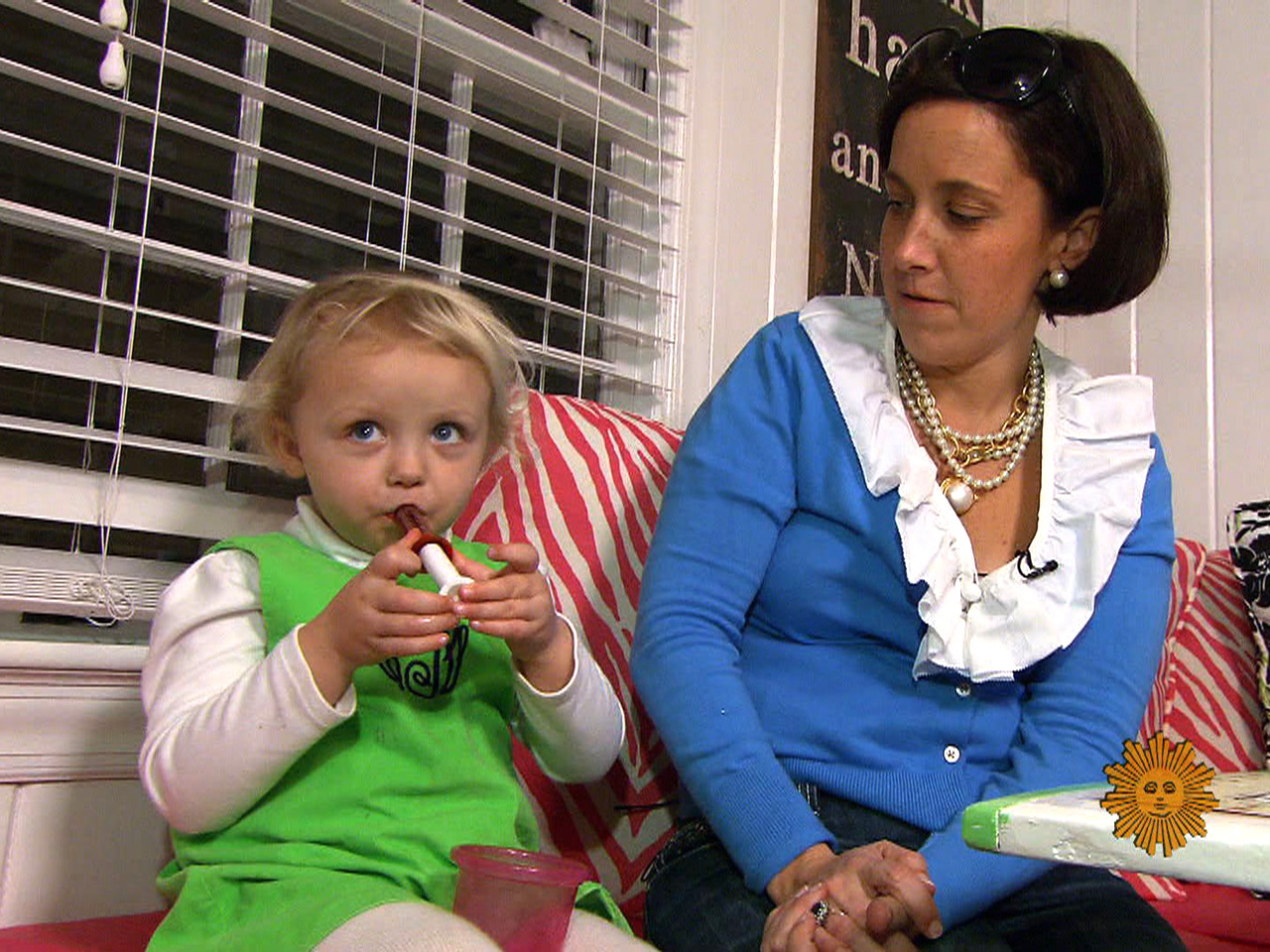 (CBS News) Just one small step in the fight against cancer can make a big difference to anyone who's been touched by the disease, which is why one treatment aimed at children is giving rise to cautious hope. Our Cover Story this morning is reported by Tracy Smith:

At her home in Lynchburg, Va., three-year-old Edie Gilger is more familiar with a doctor's bag than any kid should be: at six months old, doctors said she had cancer.

"She had stage four neuroblastoma," said her mom, Emily Gilger. "And, of course, we had no clue what neuroblastoma was. I mean, we didn't even know at that point that it was a cancer."

For her parents, Nick and Emily, it was bad news, to be sure. But Edie's still here -- and she owes that to advanced research, and (in a small way) to another little girl with the same disease whom she'll never meet.

Alex Scott was diagnosed just shy of her first birthday. We first met Alex, and her parents Liz and Jay, in the summer of 2003.

For Alex, none of the standard treatments, like chemotherapy, worked for very long. So, like most childhood cancer patients in this country, Alex was given experimental treatments to keep her alive.

Even as a kid, Alex knew that all those clinical trials cost real money. So she told her parents she wanted to open a lemonade stand on her front lawn, with the money going to finding a cure.

Smith asked Alex about it back in 2003: "Why did you decide to do this lemonade stand?"

"Because I wanted to help raise money for cancer research," she replied.

"And why is that important to you?"

"Because it's helping people," Scott said.

As her story got out, Alex's stand became an annual event in her Philadelphia neighborhood, and beyond.

By the summer of 2004, Alex and her friends across the country had raised close to a million dollars.

But even as the money poured in, Alex herself was running out of time. For Liz Scott, it's as painful now as it was then: "It became very hard to see treatment after treatment fail, and to have her cancer spreading to places that we knew there was no turning back."

On the first day of August 2004, Alex Scott died. She was eight years old.

Her parents vowed not to let her dream of finding a cure die with her.

Watch: Tracy Smith's 2005 report on the legacy of Alex Scott

Smith, who has continued to follow the Alex's Lemonade story over the years, volunteers at their annual fundraiser.

So far, Alex's foundation has helped pay for nearly 300 cancer studies, some of them at the Children's Hospital of Philadelphia.

One of Alex's doctors, Yael Mosse, and her team studied a link between cancer and a hereditary gene mutation called anaplastic lymphoma kinase, or ALK. This mutated ALK gene seems to make certain types of cancer grow.

"We kind of had a hypothesis in the lab that if we could turn it off, it may turn off the growth of the cancer, if this cancer is, indeed, dependent on this gene, if it's really being fed by this gene," said Dr. Mosse. "It's like the fuel for the cancer.

And crizotinib -- a drug already used to successfully treat lung cancer in adults -- can sometimes turn OFF that mutated ALK gene.

Dr. Mosse says that drug therapies like crizotinib target very specific types of cancer, and can do a lot of good for small groups of patients.

"We have to be smarter than just giving drugs that kill rapidly-dividing cells," she said. "We have to give drugs that are turning off something that's driving the cancer."

So, using money from Alex's Lemonade Stand and other sources, doctors were able to fast-track a federally-funded crizotinib trial for nearly 80 children.

And what happened? "We saw some pretty dramatic responses in children who have lymphoma that's driven by this gene, ALK," Dr. Mosse said.

"When you say 'dramatic response,' what do you mean?" asked Smith.

"We saw the cancer go away within days and weeks. Go away completely."

It didn't help everyone, but one group with a very specific type of lymphoma, the difference was huge.

One of them was Zach Witt, of Berks County, Pa., who at age six was near death. But after only a few days on crizotinib, Zach got out of his hospital bed, to the amazement of his parents, Pam and John.

"We came home within a few days of that, and he got out of the car and got on his bike and started riding his bike," said Pam Witt. "And we just stood at the car and cried. Like, wow. Wow."

Now, two years later, Zach is still on the drug, and is as active as any other kid his age. "The bottom line is that Zach is a walking miracle," said Pam.

But "miracle" is an awfully big word.

When asked if crizotinib is a cure, he told Smith, "Not yet. I think crizotinib, we hope, when added to other treatments, may become a cure. But right now, it is a promising treatment for a small number of children with certain cancers."

And that brings us back to Edie Gilger. After four major surgeries and 14 rounds of chemotherapy, the little girl's tumor was still growing, and her parents figured they had nothing to lose.

In her gut, said Emily Gilger, "I expected it not to work. The chemo didn't work. The surgeries didn't work. So, I was just sort of like, 'All right. Well, we'll try it. I'll give anything a shot for three months.' "

After four weeks on the crizotinib trial, they gave Edie a routine scan to see if her tumor responded, and got what might have been the shock of their lives.

"The radiologist called me before I even had a chance to walk over and look at the scan and said, 'Her surgery was a success and the tumor's all gone,'" said Dr. Mosse. "And I said to the radiologist, 'She didn't have surgery.'

"We looked at the pictures again and again, and it became very clear that there was no tumor that we could see. We double-, triple-, quadruple-checked."

"I mean, it is an absolute miracle," said Nick Gilger. "No other way to put it."

It wouldn't be a miracle for everyone: only a small number of patients with Edie's form of cancer responded this well. But for her, it's made all the difference. She takes crizotinib twice a day, and doesn't seem to mind all the syringes.

Still, it's impossible for the Gilgers -- or any of the other parents in the study -- to know if the cancer is gone for good.

"If the cancer comes back," Smith asked, "in these cases, does that mean the treatment was a failure?"

"I don't want to oversell a new treatment, and put false hope out there," said Dr. Adamson. "But every parent who has a child with cancer understands what they're up against. And so when there is reason for hope, hope is very powerful. We shouldn't stand in its way."

There are new, more promising cancer treatments all the time. But what makes THIS story special is that one little girl's life has been touched by another little girl who knew how important it was to have just one more day.

"I thought it was incredible," said Liz Scott. "I just felt like it made Alex's life make a little more sense."

The Gilgers say they'll tell Edie about Alex Scott Someday. They hope it'll be something she can share with her grandchildren.