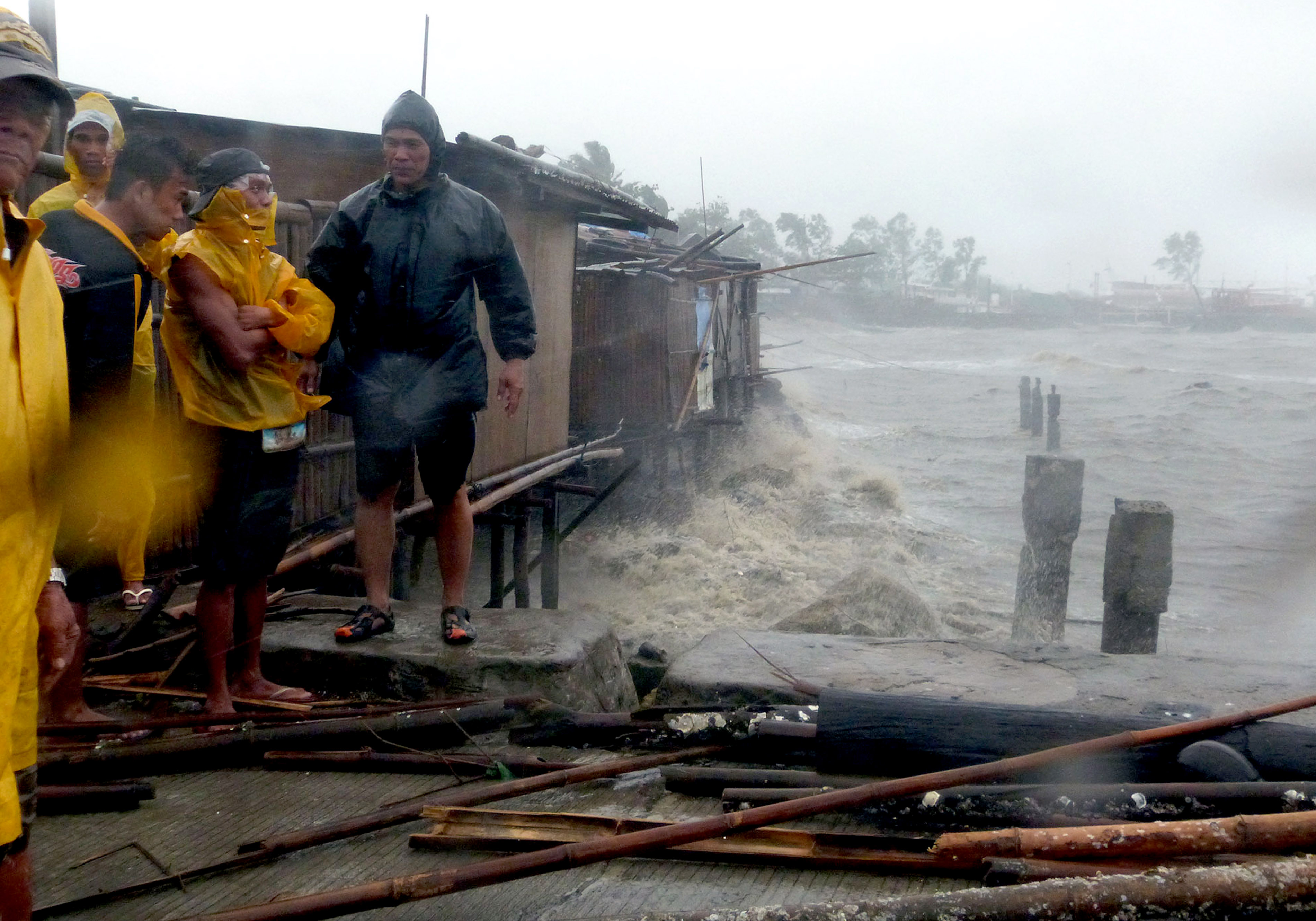 MANILA, Philippines One of the strongest storms on record has killed more than 100 people and injured another 100 in the central Philippines as it wiped away buildings and leveled seaside homes before sweeping west toward Vietnam on Saturday, still packing destructive winds.

Capt. John Andrews, deputy director general of the Civil Aviation Authority of the Philippines, said he had received "reliable information" from his staff describing the death and destruction Typhoon Haiyan wreaked in Tacloban city on Leyte Island, where the storm made landfall Friday.

He told The Associated Press that more than 100 bodies were lying in the streets and another 100 were injured.

He said civil aviation authorities in Tacloban, about 580 kilometers (360 miles) southwest of Manila, reported that the seaside airport terminal was "ruined" by storm surges. Radio messages to the capital, Manila, had to be relayed through another airport in the central Philippines once every five hours to conserve radio batteries.

Cabinet Secretary Rene Almendras, a senior aide to President Benigno Aquino III, said that the number of casualties could not be immediately determined, but that the figure was "probably in that range" given by Andrews. Government troops were helping recover bodies, he said.

U.S. Marine Col. Mike Wylie, who surveyed the damage in Tacloban prior to possible American assistance, said that the damage to the runway was significant. Military planes were still able to land with relief aid.

"The storm surge came in fairly high and there is significant structural damage and trees blown over," he told the AP. Wylie is a member of the U.S.-Philippines Military Assistance Group based in Manila.

Relief workers said they were struggling to find ways to deliver food and other supplies, with roads blocked by landslides and fallen trees.

Weather officials said Haiyan had sustained winds of 235 kph (147 mph) with gusts of 275 kph (170 mph) when it made landfall. By those measurements, Haiyan would be comparable to a strong Category 4 hurricane in the U.S., nearly in the top category, a 5.

Hurricanes, cyclones and typhoons are the same thing. They are just called different names in different parts of the world.

As CBS News' Seth Doane reported, Vietnam is expected to get the worst of it this weekend and then the storm heads towards China - where officials here have already warned people to prepare for "high seas" and "monster waves."

The typhoon's sustained winds weakened Saturday to 163 kph (101 mph) with stronger gusts as it blew farther away from the Philippines toward Vietnam.

"The evacuation is being conducted with urgency and must be completed before 5 p.m.," disaster official Nguyen Thi Yen Linh by telephone from central Danang City, where some 76,000 are being moved to safety.

Hundreds of thousands of others were being taken to shelters in the provinces of Quang Ngai, Quang Nam and Thua Thien Hue. Schools were closed and two deputy prime ministers were sent to the region to direct the preparations.

The typhoon was forecast to make landfall around 10 a.m. Sunday between Danang and Quang Ngai and move up the northeast coast of Vietnam.

Because of cut-off communications in the Philippines, it was impossible to know the full extent of casualties and damage. Officially, four people were listed as dead as of Saturday morning, before the latest information from Tacloban came in.

The dense clouds and heavy rains made the day seem almost as dark as night, he said.

"When you're faced with such a scenario, you can only pray, and pray and pray," Mercado told The Associated Press by telephone, adding that mayors in the province had not called in to report any major damage.

"I hope that means they were spared and not the other way around," he said. "My worst fear is there will be massive loss of lives and property."

Eduardo del Rosario, head of the disaster response agency, said the speed at which the typhoon sliced through the central islands - 25 mph - helped prevent its 375-mile band of rain clouds from dumping enough of their load to overflow waterways. Flooding from heavy rains is often the main cause of deaths from typhoons.

"It has helped that the typhoon blew very fast in terms of preventing lots of casualties," regional military commander Lt. Gen. Roy Deveraturda said. He said the massive evacuation of villagers before the storm also saved many lives.

The Philippines, which is hit by about 20 typhoons and storms a year, has in recent years become more serious about preparations to reduce deaths. Public service announcements are frequent, as are warnings by the president and high-ranking officials that are regularly carried on radio and TV and social networking sites.

Among the evacuees were thousands of residents of Bohol who had been camped in tents and other makeshift shelters since a magnitude-7.2 earthquake hit the island province last month.

World weather experts were calling the typhoon one of the strongest tropical cyclones on record at the time it hit land, but not quite the windiest. There were disputes over just how strong it is because of differences in the way storms are measured.

"In terms of the world I don't think it's the strongest," said Taoyang Peng, a tropical cyclone scientist at the World Meteorological Organization in Geneva. But he added that "it is one of the strongest typhoons to make landfall" and probably the strongest to hit the Philippines.

The U.S. Joint Typhoon Warning Center put Haiyan's sustained winds at 196 mph just minutes before it made landfall Thursday, which would be a world record. However, officials in Tokyo and the Philippines but the wind speed at about 147 mph.

Peng said his group considers Tokyo the authority in this case because it's the closest regional center to the storm.

The best way to measure a storm is with radar from a plane flying in and out of it. That's not done in Asia, where they use satellite imagery and ground measurements instead.

Not until meteorologists can conduct a deep investigation will scientists know just how strong Haiyan actually was, but it will easily be one of the strongest on record, former U.S. National Hurricane Center director Max Mayfield told the AP on Friday.