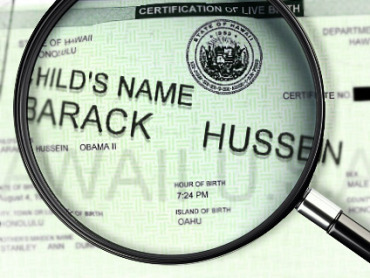 Now this is surprising: According to a new ABC News/Washington Post poll, about one in three so-called "birthers" - those who erroneously believe President Obama was born outside of the United States - nonetheless approve of the president's job performance.

Fourteen percent of those surveyed in the poll volunteered that Mr. Obama was born in another country, a figure that rose to 20 percent when pollsters explicitly offered that as a possibility.

That means roughly one in five Americans could be considered a birther, according to the poll. It showed that about one in three conservatives and Republicans believe the president was born abroad. Fifteen percent of Democrats agree.

Yet it's worth noting that about half of these birthers cast their position as just suspicion, not a firm belief. The rest (about nine percent of Americans overall) say there is "solid evidence" that the president was born abroad.

As has been repeatedly shown, Mr. Obama was born in Hawaii in 1961. Birthers have suggested that Mr. Obama is not eligible for the presidency because he fails the constitutional requirement that the holder of the office be a natural born citizen.

Overall, 68 percent of those polled said without being prompted that Mr. Obama was born in the United States. Another nine percent said that was their "best guess," bringing the non-birther total to 77 percent.

People who have not gone past high school are far more likely to say the president was born abroad (24 percent say so) than those who have post-graduate degrees (13 percent).