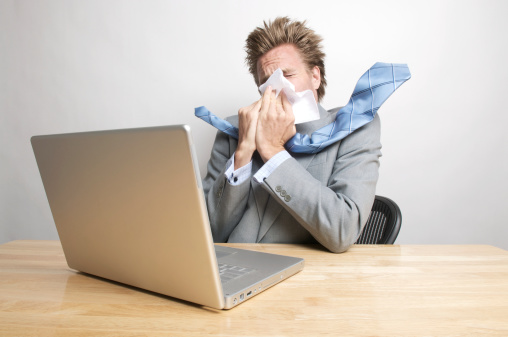 Many people worry about catching a virus from a sick coworker, but perhaps they should also start worrying about other sources of possible infection. New research shows that contamination of just a single doorknob can help spread germs throughout office buildings, hotels or health care facilities within hours.

Researchers applied samples of a virus to surfaces such as doorknobs and tabletops and found that, within two to four hours, the virus had been picked up by 40 to 60 percent of workers and visitors in the facilities and could be detected on many commonly touched objects.

In the study, the investigators used a virus called bacteriophage MS-2 as a surrogate for the human norovirus -- the most common cause of the stomach flu -- as the two viruses are similar in shape, size and resistance to disinfectants. The researchers placed the tracer virus on one or two surfaces -- a doorknob, a tabletop or both -- at the beginning of the day. Then a few hours later, they tested various surfaces in the building such as other doorknobs, light switches, bed rails, phones and computer equipment for the virus, and found the germs had spread widely.

Fortunately, the researchers say that there seems to be an easy solution to the contamination issue: disinfectant wipes.

"Using disinfecting wipes containing quaternary ammonium compounds (QUATS) registered by EPA as effective against viruses like norovirus and flu, along with hand hygiene, reduced virus spread by 80 to 99 percent," study author Charles Gerba of the University of Arizona, Tucson, said in a statement.

Each year, norovirus causes an estimated 19 to 21 million illnesses and contributes to 56,000 to 71,000 hospitalizations and up to 800 deaths. Touching surfaces or objects contaminated with norovirus, and then touching your mouth, is a common source of infection.

The CDC recommends that, to prevent a norovirus infection, your should wash your hands with soap and water, especially after using the toilet and changing diapers, and always before eating, preparing, or handling food.

The agency also stresses that alcohol-based hand sanitizers can be used in addition to hand washing; however, they should not be used as a substitute for this basic practice.

The new research was presented Monday at the 54th Interscience Conference on Antimicrobial Agents and Chemotherapy (ICAAC) in Washington, DC.