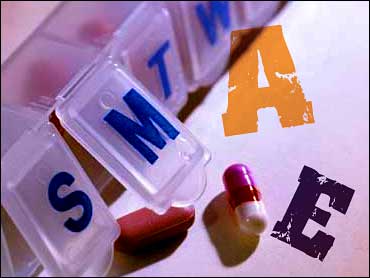 Many experts say the finding, published this week in The Lancet medical journal, settles the issue of antioxidant vitamins for heart health.

But others argue that the pills might still prove useful if started earlier and that while they do not seem to prevent heart attacks and premature death, further studies may show they help to delay the onset or progression of heart disease or other blood vessel problems.

Antioxidant nutrients, especially vitamin E, were widely recommended a few years ago as a way of keeping the heart healthy. However, several recent large studies failed to show any benefit, and a few raised the possibility that the pills might be harmful for some.

"The public health viewpoint would have to be that there's really nothing to support widespread use of these vitamins," said Dr. Ian Graham, a professor of cardiology at Trinity College in Dublin, Ireland.

The researchers found that vitamin E did not reduce death from cardiovascular or any other cause and did not lower the incidence of strokes.

"For heart health, we've answered the question and one is potentially hazardous," said one of the investigators, Dr. Mark Penn, a Cleveland Clinic cardiologist.

"I think there are enough studies that have looked at a diverse enough group of individuals that it's unlikely that we're going to have a flip-flop," said Lichenstein, a professor of nutrition science and policy at Tufts University who was not connected with the research.

The idea that antioxidant vitamins might ward off heart trouble was plausible. Test tube studies indicated that antioxidants protect the heart's arteries by blocking the damaging effects of oxygen. The approach works in animals, and studies show that healthy people who eat vitamin-rich food seem to have less heart disease.

However, experts say that perhaps antioxidants work when they are in food, but not when in pills. Some even think antioxidants may have been a red herring and that maybe people who eat vitamin-rich food generally take better care of themselves and that's why they have lower heart disease risks.

However, Jeffrey Blumberg, a professor of nutrition and chief of the Tufts antioxidants research lab, maintained that scientists should not write off antioxidants for heart health just yet.

"Some of the studies showed benefits in other areas, such as ... cardiac arrythmias, which suggested there were some benefits in some subsets of groups," he said.

John Hathcock, vice president of scientific and international affairs at the Council for Responsible Nutrition, a trade group for makers of antioxidants and other dietary supplements, noted that although animal studies and observations in humans suggested the pills would best be used in healthy people, the key studies were done in people who were already either sick or at elevated risk of heart disease.

"Ultimately, the end points of deaths and heart attacks are valid, but if you start when the person is already at high risk or has disease, then it may be too late for the benefit to occur," Hathcock said.