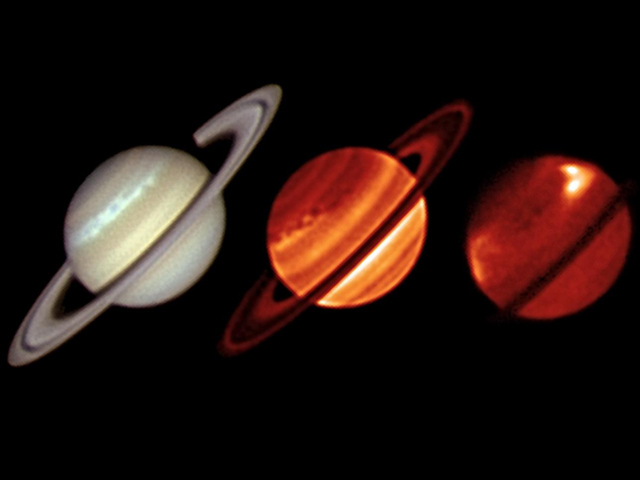 The best views yet of a giant, once-in-a-generation storm on Saturn are now emerging, revealing how such tempests disrupt the ringed planet and create hot spots and cold vortexes, researchers say.

These findings could shed new light on the behavior of giant planets orbiting both alien stars and our sun.

The atmosphere of Saturn normally appears calm, but about once per Saturn year — equal to about 30 Earth years — the giant world is gripped by a titanic storm as spring comes to its northern hemisphere. The current monster Saturn storm erupted last Dec. 5.

"This disturbance in the northern hemisphere of Saturn has created a gigantic, violent and complex eruption of bright cloud material, which has spread to encircle the entire planet," said researcher Leigh Fletcher, a planetary scientist at the University of Oxford in England.

It took less than a month for the storm to radically disrupt the temperature, winds and composition of the atmosphere in an area 87,000 miles (140,000 kilometers) wide, between 20 and 50 degrees north.

This is only the sixth monstrous storm detected on Saturn since 1876. It is the first to be observed by an orbiter, NASA's Cassini spacecraft, which used its radio and plasma wave science instrument to first detect it.

It is also the first to be monitored in the thermal infrared, using Cassini's Composite Infrared Spectrometer instrument and the European Southern Observatory's Very Large Telescope in Chile.

"Previous studies of these storms have only been able to use reflected sunlight," Fletcher said, "but now, by observing thermal infrared light for the first time, we can reveal hidden regions of the atmosphere and measure the truly spectacular changes in temperatures and winds associated with this event."

The storm may have originated deep down in Saturn's water clouds. There, just as hot air rises in a heated room, a huge mass of gas "rather like a system of thunder clouds" could have punched upwards through the ringed planet's normally serene upper atmosphere, Fletcher explained.

This bright plume of clouds then interacted with circulating winds moving east and west, triggering never-before-seen anomalies described as "stratospheric beacons" — very strong changes in temperature approximately 155 to 185 miles (250 to 300 kilometers) above the cloud tops of the lower atmosphere.

These beacons are invisible in reflected sunlight, but in thermal infrared light they can outshine the emissions from the rest of the planet. While Saturn's stratosphere is normally about 200 degrees below zero Fahrenheit (minus 130 degrees Celsius) at this season, the beacons are warmer by about 25 to 35 degrees Fahrenheit (15 to 20 C).

"The beacons have persisted from at least January 2 to the present day ... in fact, the beacons have grown stronger," Fletcher told SPACE.com. "They're at least 30,000 kilometers (18,600 miles) wide, and there was one on either side of the central disturbance."

Anatomy of an extraterrestrial storm

When analyzing how these beacons developed, "the images show that the stratosphere over the disturbance is cold, suggesting rising air, but flanked by warmer regions to the east and west," she said. "What comes up must go down, so these beacons may be formed by air subsiding and warming up in the stratosphere.

"It's like the stratosphere is adjusting to the intense perturbations going on deeper down."

Astronomers are not sure if these hot spots are common features in such storms. "The beacons are so new that we're uncertain what their fate may be, but we'll be continuing to track them to see how they evolve over the coming months," Fletcher said.

"We believe it's cold for the same reasons as Jupiter's Great Red Spot," Fletcher said. "You have a central core of upwelling air, which expands when it reaches the top of the troposphere [the lowest portion of the atmosphere], and that expansion causes cooling."

The turbulence of the storm causes temperature and pressure differences, "and air tends to circulate around regions of different pressure," she added."In most cases, this just causes a jet stream to meander like a wave, but in this instance the flows formed a spinning vortex, which might be analogous to the formation of spinning weather systems on Earth.

"We didn't see anything like that in previous storms, but then again, we didn't have the resolution or the infrared capabilities to do so," Fletcher said. "I don't think we expected something quite so complex or beautiful to emerge from this storm system, and given that it's embedded in this turbulent weather system, we can't say how long it might last."

Nevertheless, the researchers expect the aftermath of this storm to influence Saturn's northern hemisphere for years to come.

"The cold vortex might be ephemeral in nature, but the disturbance in general has had a dramatic effect already, moving the atmosphere around and redistributing Saturn's energy and composition," Fletcher said. "We are continuing to observe this once-in-a-generation event."

The intense variations in heat emissions seen here in Saturn could happen not just elsewhere in our solar system, but on alien worlds. These findings show "that you need continuous monitoring, rather than just snapshots, to really understand these complicated atmospheres, both in our solar system and beyond," Fletcher said.

The scientists detail their findings online May 19 in the journal Science.